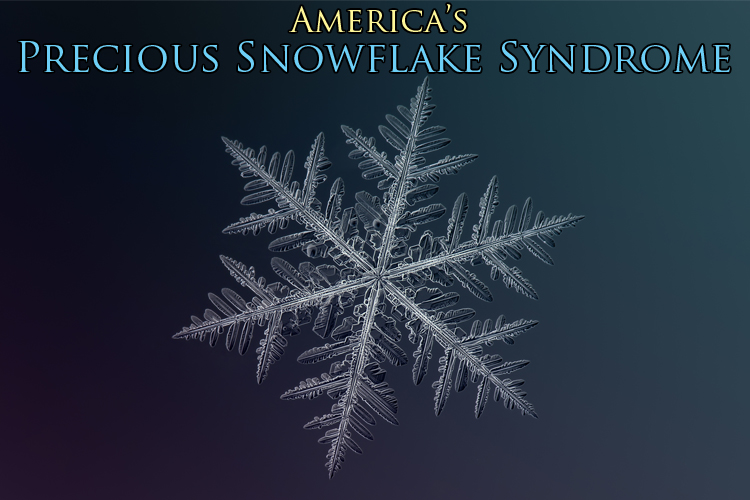 Ours is a culture increasingly defined by flakes.

These Precious Snowflakes are all around us. They dominate our public schools, our government institutions, our corporate owned media, our fiat currency fueled economy, and even most of our self-described “conservative, Bible-preaching” churches.

And they’re killing us.

Ever so softly and nicely, with warm smiles and hugs, they’re doing everything they can to drag us down into the hell of Precious Snowflake Syndrome.

What a pathetic way to go: death by Precious Snowflake.

Yet here we are, buried more with each passing second under the suffocating fluff of pagan thought defining the modern American worldview when it comes to freedom, liberty, sexuality, speech, gender, religion, church, law, politics, bathrooms, and everything else.

Precious Snowflake Syndrome has come to utterly dominate American culture, including its professing Christian subculture, in no small part through the efforts of “conservative, biblical” churches, pastors, and Christians who pitch a very shallow pseudo-Gospel that aims at best to “get someone saved” while abandoning the Great Commission mandate to make disciples who obey all that Christ has commanded.

And that’s “at best”. Forget the seeker sensitive “churches” building their business models around cowboy hats, biker jackets, and the like. That’s a rabbit to chase and kill at another time, but for now let’s focus on the core enabler of Precious Snowflake Syndrome (PSS): A love of ease.

Ease is the key to understanding how and why PSS now effectively owns America, including most “conservative Christian” churches. Since a shallow, simple, man-centered gospel is so much easier to package, pitch, sell, and practice than the everything-touching, life-defining Gospel of Christ at the heart of His Great Commission, even American “conservative Christians” are more often than not now all about coddling and enabling the further spread of Precious Snowflake Syndrome.

We’ve been chronicling PSS for a while here. In articles like Daddy (Isn’t There) Issues: The Myth of Autonomy and Weaponized Victimhood in a Crybully Culture, we’ve aimed to help shed some light and encourage some loving correction in accordance with the Gospel-fueled Great Commission, so that people, families, churches, communities and culture might be wrested from the cold, selfish and deadly grip of flakedom.

We revisit this concept now due to a recent article touching on PSS.

In Meet ‘Generation Snowflake’ – the hysterical young women who can’t cope with being offended, The Sun provides a glimpse into what this syndrome is producing on the other side of the pond:

Claire Fox, head of a thinktank called the Institute of Ideas, has penned a coruscating critique of “Generation Snowflake”, the name given to a growing group of youngsters who “believe it’s their right to be protected from anything they might find unpalatable”.

She said British and American universities are dominated by cabals of young women who are dead set on banning anything they find remotely offensive.

“It makes me sad that these teens and 20-somethings have become so fearful that they believe a dissenting opinion can pose such a serious threat,” Fox wrote in an article for Mail Online.

This hyper-sensitivity has prompted the University of East Anglia to outlaw sombreros in a Mexican restaurant and caused the National Union of Students to ban clapping as “as it might trigger trauma”, asking youngsters to use “jazz hands” instead.

Books containing troublesome material are now slapped with “trigger warnings”, whilst universities and student unions are declared “safe spaces” where young people should not have to encounter anything they disagree with.

Fox described astonishing scenes at an event set up to discuss whether the public outcry against footballer Ched Evans was “social justice or mob rule”.

The academic said her mostly female audience broke down in tears after she “dared suggest (as eminent feminists have before me) that rape wasn’t necessarily the worst thing a woman could experience”.

Fox added: “I expected robust discussion – not for them all to dissolve into outraged gasps of, ‘You can’t say that!’

“Their reaction shocked me. I take no pleasure in making teenagers cry, but it also brought home the contrast to previous generations of young people, who would have relished the chance to argue back.

“It illustrated this generation’s almost belligerent sense of entitlement. They assume their emotional suffering takes precedence. Express a view they disagree with and you must immediately recant and apologise.”

Okay, so none of this is really surprising anymore. I get that and am not trying to pretend that anyone should be shocked at the revelations in this particular article.

What will hopefully come by way of this additional glimpse into the reality of PSS as it spreads its rot and decay throughout Western Civ is a sense of conviction.

And repentance followed by restoration, all by God’s grace and all in accordance with His Great Commission – the Great Commission abandoned by most “conservative Christians” who have personally and corporately contributed greatly to the incubation and proliferation of Precious Snowflake Syndrome.