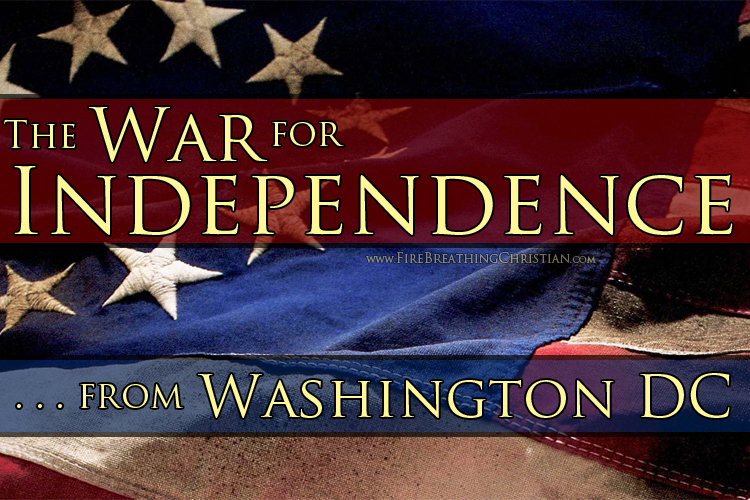 It’s the fourth of July in America, and there’s something heavy in the air.

Something both serious and surreal at the same time. It’s creepy and unnerving to some. Depressing and downright terrifying to others.

And it’s getting a thicker with each passing year.

Ideas, propaganda, hard realities, and desperate spin are ramping up all around us. Culture-rocking events are arriving with more frequency and greater intensity, like birth pangs at the end of an age.

No, I’m not talking about the end of the age; but rather the welcome end of the age of the American State. The signs of those times have been bubbling up around us for generations.

With that “end of the age” point clarified, we as Christians should be pondering and savoring the incredible wave of opportunities that are about to come as the American Titanic finally fully breaks apart under our feet. We should be working hard to seize the opportunities available to us now so that we might more effectively engage in the ongoing propaganda and information war of independence from Washington DC while also going about the business of putting pieces in place so that we’re well positioned to lead and assist what’s sure to be a mass of very distressed people when the last vestiges of American Titanic are finally resting at the bottom of the sea.

This fourth of July, while celebrating the many good and beautiful things we ought to thank God for where the founding of the United States is concerned, let’s commit ourselves to dealing with reality regarding how radically different in character and culture this modern America is from the founding philosophy that we are encouraged to celebrate in a very abbreviated, very controlled manner these days.

Let’s stop singing psalms of Statism and taking socialist-written pledges to the indivisible power of the political State (something the Founders obviously would never have encouraged) long enough to notice that we have been thoroughly duped and enslaved to uncritically worship and support an American State that now boldly and proudly champions a vast array of grotesquely anti-Christian concepts – all in the name of All-American “freedom”, of course…which is why we should pray for this empire’s quick fall if it will not repent.

These are some themes that we encourage Christians to dwell upon, pray over, and act upon with some regularity here at Fire Breathing Christian. America idolatry, anti-Christian Statism, and a satanic approach to law, liberty, justice and law are things that are being hammered on quite emphatically by God right now as He lovingly chastises and disciplines people, cultures, and civilizations, giving each and every one of yet another opportunity to repent, believe, and be reconciled to Him. In the midst of this storm, we as His people are here to model loving obedience to our King, thereby encouraging repentance and reconciliation to others.

So as we do the fireworks thing and enjoy time with families, let’s use at least part of that time together to discuss the reality of America’s hard-earned, pride-fueled death and the need for Americans to embrace a Christ-centered approach to liberty and freedom so that we do not fall completely under the bondage of the modern America-centered and America-defined (per)versions of these things.

Let’s stop flinching from the reality that not only must Washington DC inevitably fall from its position of power over us, but it is likely to do so far sooner than many now realize.

The ideological, propaganda-fueled war of independence from DC has been going on for some time now, and as the infrastructure of American Leviathan begins to fray, creak, and snap, we need to prepare ourselves and others do deal with the realities of what is happening now as well as the painful, challenging things that are sure to come before we emerge on the other side of DC’s fade into the ashbin of history.

The war for independence from DC is being fought now by those withdrawing from the systems designed to ensnare them. It’s being engaged in the realm of children’s education – where generational trajectory is determined – with many Christians finally repenting and submitting to the loving, life- and culture-saving Word of God on the subject of education, actually raising their children as they’ve been commanded and equipped to do by God. Those children, as they grow and move on into maturity, maintaining fidelity to the multigenerational vision of their parents, pose the single greatest material threat – an existential threat if there ever was one – to the already crumbling empire of the American State.

We need to encourage and assist others to join in this critical ongoing war effort as often as possible.

These and other Kingdom war efforts should be in our prayers and on our minds regularly as we march forward to victory by the grace of our King.

Last year on “Independence Day” weekend, we posted Are we really free? Do we even want to know?

That post came on the heels of the Supreme Court decision to mandate legality for “gay marriage”, which itself cam right after the same court legitimized ObamaCare as the new socialist medical law of the land.

Today’s post comes on the heels of the Supreme Court defending the “legal” sacrifice and bloody dismemberment of baby boys and girls. It also comes in the aftermath of a recent Presidential decree from DC regarding open access to girls’ restrooms by any transvestite pervert of a man who claims to feel “more comfortable” in a bathroom with a girl than in a bathroom with actual men (not that there are many of those left in America, apparently, but the point still stands).

So what’ll it be next year, after we have either President Trump or President Clinton?

I’ll tell you what it’ll be: Another year closer to the complete end of DC rule.

Another year of the open obliteration of DC credibility.

Another year of God laying bare the many lies holding together a relentlessly propagandized culture of slaves to the American State.

Another year of more and more people in Oklahoma, Texas, Idaho, Arkansas, Tennessee, and Wyoming wondering why exactly they should be subject to such a clearly hostile, culture destroying, power-mad, anti-Christian cesspool as Washington DC…and why their fate should be chained to that of California, Massachusetts and New Jersey like proisoners rowing side-by-side on an old Roman slave boat.

So the war is on.

And DC is losing.

The sooner we as Christians get clarity on these points and start acting accordingly, the better.

The sooner we learn, the quicker they fall.

The more thoroughly and thoughtfully we prepare and engage, the better the path out of the post-DC wreckage…and the quicker we get to start down that path.