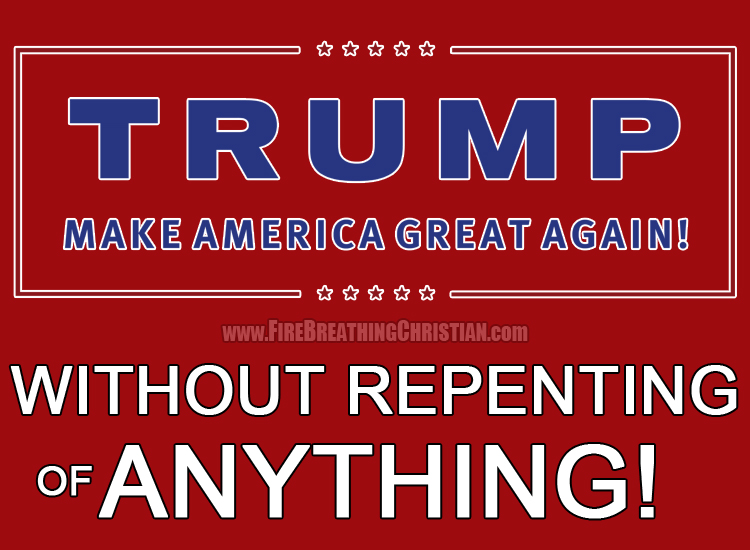 What do you do with a Great Commission sized vacuum?

How do you fill a Great Commission shaped void?

In America, the answer seems to be easy: You replace the Gospel-fueled Great Commission with the America-centered religion of American Statism.

This America-centered religion is indeed a “big tent” operation, with a wide variety of expressions and flavors.

There are pagan Libertarian and Green spins on the same basic idea, too, and many other even more eccentric variations to choose from as well. The bottom line and shared foundation for all of them is this: Jesus is not King, and “We the People” are not bound by His Word when it comes to law, government, politics, economics, art, education or anything else.

So the shared foundation of these anti-Christ alternatives is not surprisingly satanic in nature.

And wildly popular in ‘Merica.

Each and every political group gathered ’round one of these alternative, man-centered visions for humanity has its own precious little faux great commission – a worldview and vision by which disciples are to be made and culture is to be improved and eventually perfected.

That’s what we saw last week in Cleveland and that’s what we’re gonna see this week in Philadelphia.

Worldviews will be on display.

Solutions will be proposed.

Discipleship will be promoted.

Evangelism will be everywhere.

The worldviews, solutions, discipleship and evangelism on display will have no connection whatsoever with repentance and submission to Christ as the essential starting point to true life- and culture-saving restoration. Oh no. Instead, they will all be aimed at encouraging you, me, and everyone else to look anywhere but toward the perfect Word of God as our only hope for salvation, corporate or otherwise.

They will all center on pride and self-centeredness rather than on repentance and submission to Christ as King in practice.

And most professing Christians in the land will buy it hook, line, and sinker, as they have for generations now.

Most professing Christians in America will enthusiastically plunge their passion, talent, time, and treasure into service to one of these explicitly anti-Christian missions.

This is where we are in July of 2016 in America, and we need to be aware of it. We need to  have our eyes open, no matter how painful it may be to see what’s being so clearly revealed to us by God’s grace in this critical hour. We cannot afford to pretend, sleepwalk or deny reality through another election cycle.

We need to wake up and deal with reality in faith, trusting that God has us right where and when He wants us.

So for those of us blessed to be placed by Him on the American front in the war to expand His Kingdom, we need to take an honest, accurate survey of exactly what is going on here during 2016’s Convention Week II.

We have to recognize and combat the false religion, false gospel, and false great commission of the American Republican and Democrat Statists now taking center stage.

Once again and right on time, we State-educated and Corporation-managed citizens of “the land of the free” and the home of the NSA are being encouraged to embrace this year’s presidential race as “the most important election of [insert very important milestone marker here]”.

Can we please at least get a fresh cup of propaganda around here?

Are things really so bad that the American political puppet people and their promoters can’t even come up with a new line to strike fear, terror, and compliance into the hearts of voters?

C’mon…please…don’t we deserve at least that much?

Clearly, we’re getting exactly what we deserve; what our itching ears want to hear…year after year…cycle after cycle…and generation after generation.

And it keeps right on working!

Republican and Democrat national leaders keep right on pumping the same old bilge year after year and we keep swilling it up, slurping it down, and begging for more.

We are also being told that if we don’t support the lesser of the two evils prepared for us this time ’round, America will blow up, burn down, die and fade away, leaving the world without its one and only essential, exceptional “shining city on a hill” to lead it to the promised land of freedom, liberty, and justice for all.

That’s what America is.

This is where we’ve allowed ourselves to be led.

These are the evidences of God’s wrath pouring out upon a proud, unrepentant people.

The “great” commissions of both the Republican and Democrat parties will only lead us further down the same proud, unrepentant, and ultimately destructive path.

Remember that as you contemplate and discuss the spin surrounding either of these satanic Statist political conventions.

Instead of clinging to pride, repent.

Instead of being manipulated by fear of anyone and everything but the Lord, believe, trust, and rest in Him with confidence.

This is the only path to true salvation for anyone anywhere in God’s creation, despite everything the Trump and Clinton camps are pitching to the contrary.