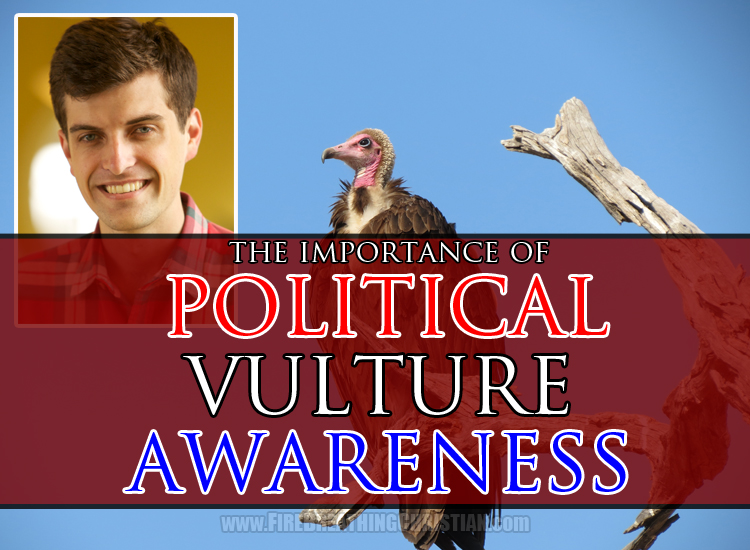 And man, are the buzzards ever circling over America.

These vultures take many forms and seem to be flocking and frolicking over pretty much every area of life here in “the land of the free” and the home of the NSA, but nowhere are they more obvious than in the political realm.

This should be no surprise to Christians.

One of the more clearly revealed and repeated themes of Scripture is that wicked leadership is the judgment of God upon wicked people. So with Americans even in their most supposedly “conservative Christian” flavors now standing quite proudly for explicitly satanic approaches to everything from children’s education and economics to law and religious pluralism, we see with excruciating clarity that “We the People” are getting exactly what we deserve.

We don’t want Christ as King in practice.

And we certainly don’t want men who want Christ as King in practice to lead us.

But – and this is a biggie, so please pay attention – we do want (especially in the self-identified “conservative Christian” camp mentioned earlier) men who claim to be Christian, who claim to love Christ, and who claim to revere His Word (in a comfortably vague, general sense, of course).

Oh yeah, that’s the kind of “Christian” we tend to want on the Right in America these days.

Which is, when you think about it, basically the same sort of “Christian” that’s popular on the Left.

We on the Right tend to want a candidate who will wrap himself in both A) the terminology of Christianity, and B) the red, white and blue of the American flag, while religiously holding the latter above the former. We want someone who’s going to continue the longstanding trend in American politics of conflating Christianity with America in a manner that leaves every pesky detail of Scripture that might confront or correct anything Americana swept aside in favor of a religion that worships the American State in practice as the one true provider of law, peace, security, strength, and prosperity here “in the real world”.

This cultural and political climate, having persisted for generations now and ensnared the vast majority of politically active conservative Christians in America, has produced the equivalent of a gigantic, thick cloud of vultures hovering overhead.

Each election cycle that we’ve allowed this to continue, the buzzards have grown in number, appetite, and boldness.

Every two years, the dense cloud of parasites hovering above grows thicker and casts a deeper, darker shadow across the land.

We’re getting what we deserve.

And we’re getting what we want.

“We the People” have clearly been given over by God to would-be leaders who actually do reflect our own hearts and desires quite accurately, despite our frequent rants and protests to the contrary. We claim to love Christ and we claim to be Christians, but we will not have Him to rule over our approach to politics, economics, education, or law. And we will only vote for those who share our rejection of His rule.

So the buzzards are circling.

This year in Tennessee there’s one particularly glaring example of the sort of vulture sent in judgment upon us.

The buzzard in question is Grant Starrett, a 28 year old law grad running for the Republican nomination to become the next Representative from Tennessee’s 4th Congressional District.

As we approach Thursday’s Republican Primary finish line, Starrett is pouring hundreds of thousands of dollars (nearly a million of his own private, trust-fund supplied dollars, actually) into last minute messaging labeling himself as a Christian conservative.

So vote for Grant Starrett.

Of course, there’s nothing wrong with any of this in and of itself.

If I was running for anything, you’d be seeing me making my campaign an openly Christ-centered thing, too (though in ways that would likely send most American Christians running away from rather than towards my campaign). I’d also be pitching conservatism – as defined from a biblical perspective (which, again, would render my campaign dead in the water in a land loaded with Christians who adore things like public schools).

All o’ that said, we should be hopeful that biblically literate, supernaturally saved Christians will indeed seek leadership positions and that God might move such people into positions of power. So the last thing I want to convey here is a lack of support for biblically sound Christians in the political arena. To the contrary, I hope and pray that God will bring more of those kinds of people into positions of influence.

The intended focus here is the nature of the buzzards circling overhead – particularly those like Starrett who are running their campaign for power quite loudly and proudly under the banner of Christ.

They are using His name to advance themselves.

So what’s going on here?

What makes a wealthy SoCal guy with pretty much zero real world accomplishments and experience decide he can swoop down on what he sees as a vulnerable Congressional District in a far away land in the middle of The Bible Belt, plop down a million or so of mommy and daddy’s cash, and secure a seat of power in Washington DC as his first “real job”?

While there are many answers to this question, I would argue that one of the greatest enabling factors in this sort of scenario is the counterfeit Christianity that has come to define America politics, and thereby American culture.

When as profoundly unqualified a guy as Grant Starrett can make a serious run at a seat in Congress by simply parading himself as a “Christian conservative” in the most excruciatingly vague, jingoistic ways possible through a million or so in ad campaigns, God is revealing something to us about what we’ve become as “Christian conservatives” in America.

Which is, to be precise: Suckers.

We’re suckers for the slick marketing of wildly unbiblical approaches to law and government so long as said marketing is slathered in Christian-ish lingo and slogans.

And we’re suckers for America-first religion cloaked in that Christian lingo.

Which makes us suckers for things like Southern California trust fund babies who want to “represent” Tennessee’s most rural district in Congress as their first real job.

Stop voting for them.

Stop being suckers and start seeking men who, however imperfectly, are actively seeking to know and obey Christ as King in political practice.