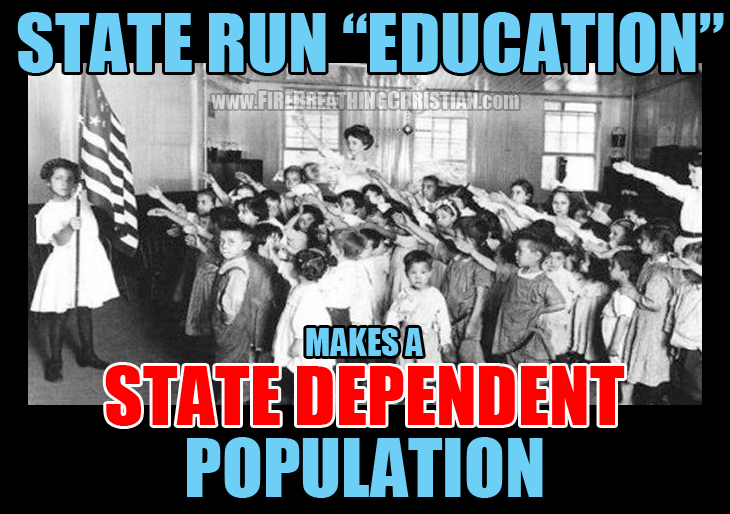 God created and has sufficiently revealed the roles, responsibilities and limitations of each of these spheres of governmental influence so that we might know how things work in His creation and thereby find our way to true peace, prosperity, liberty, and happiness in that very same creation.

But we have different ideas.

Here in America – and here in American Christianity – we think we have “a better way”; a way that inherently enables and encourages the State to expand over and above all other realms of government “out of necessity” (though certainly not any biblically defined necessity), absorbing and redefining each of these “competing” governmental realms on its own terms and for its own benefit.

This is why we have things like public schools in America.

These schools – or, better put, Temples of Statism – are the primary reason why each successive generation of “American Christians” is more Socialist, more Statist, and more anti-Christ than the last. The decline of American culture really is no mystery at all. We’ve embraced an approach to the pursuit of knowledge lifted directly from the serpent’s tongue in Genesis 3 and are simply reaping the entirely predictable “benefits”.

So why do most professing Christians in America send their little ones off to these Temples of Statism for mind-sculpting in a flagrantly anti-Christian State-run system of “education”?

‘Cause it’s American, that’s why.

It has an American flag out front.

And our moms and dads and grandmothers and granddads and pastors all went to those very same schools, don’tcha know.

We do it because that’s just what we’ve always done. It’s what we’ve been programmed to do for generations now. We don’t know and can’t seriously imagine anything else. We’ve gone so far out to sea that we can’t even see the shore anymore, and we’ve been out here for so long that not only do we not even remember what something called “the shore” looks like, we question whether such a thing even exists.

That’s how far gone we are.

Could there actually be such a land where people are free, liberty is true, civilization is advanced, and…the State has no role whatsoever in children’s education?

This concept is pure heresy to The System in which we live.

And it’s definitely not something being addressed biblically by the vast majority of “Christian leaders” guiding even the most supposedly “conservative, Bible preaching” churches in the land. More often than not, those folks vigorously support State-managed Genesis 3 style children’s education. They support and defend the golden calf being most effectively used to enslave the culture, including their own church members.

So yeah, it’s pretty bad and has been heading this way for a while now.

Our flight from a biblical approach to children’s education, self government, family government, church government and anything else that would dare threaten the power of the almighty American State has been multigenerational in duration, meaning that, after generations of State-programmed Christian moms, dads, pastors and preachers, we’ve been thoroughly conformed to the anti-Christ religion of Statism.

In spite of the lovingly provided specificity of Scripture as to which governmental realm has primary authority over the area of children’s education (the family), and which governmental realm has none (the State), “We the People” have been conditioned to believe that the education of children is, at the end of the day, the responsibility of the State.

In this, American Christians have become valuable tools of the State, helping it to mortally wound and subjugate its three primaty institutional competitors to power, namely: self-government, family government and church government.

Now most churches aren’t really churches in America, at least not as Scripture defines the body of Christ in its localized forms. American churches don’t discipline, don’t correct, don’t teach sound doctrine, and don’t expose darkness or tear down enemy strongholds in accordance with the Gospel-fueled Great Commission. These days, American churches just let the State do anything the State wants to do with little, if any, pushback, so long as their precious little 501(c)(3) business models are allowed to produce adequate material wealth.

In this, American churches have contributed most significantly to the State-promoted destruction of the other two God-ordained governmental realms: The individual and the family. With churches no longer operating biblically, the State has been left (and often is even encouraged) by the church to “help” individuals and families in ways that – you guessed it – are clearly unbiblical, and therefore ultimately produce rank immaturity and perpetually increasing dependence of individuals and families upon the almighty American State.

So here we are, getting exactly what we deserve and should certainly expect if we’d just read and believe Scripture, and we dare to wonder why our culture is now dominated and defined by infantile, dependent individuals; broken, dependent families; and a laughably impotent (though materially prosperous) church all operating under total domination by the American State. After generations of State-sponsored mind- and worldview-sculpting, American Christians find themselves living in a culture in which self government, family government and church government have become farcical, tragic jokes, while State governmental power has become all that there really is when push comes to shove and where the rubber meets the road.

State-managed children’s “education” is now assumed to be an essential core component of life in America.

Which means State-defined law is a given.

All of this – every bit of the cultural implosion and civilizational nightmare unfolding before our eyes – is purposeful.

God is telling us something.

He is showing us that there’s no reliable substitute for a clear stand upon His Word.

Vague appeals to “God” or “Christian values” won’t do it.

General claims of “being a Christian” or “loving Jesus” won’t do it.

True faith-fueled obedience, granted only by God’s grace, is our only hope for salvation – be it political, legal, economic, educational salvation, or any other kind.

With regard to what we Americans like to refer to as “The Great American Experiment”, the answer to one question will determine whether that experiment ends in failure and death or success and life.

That question is: By what standard?

By what standard will “We the People” define reality, liberty, law, justice, and freedom?

By what standard will we educate our children and shape our culture?

By what standard will we pursue life in every realm of life in God’s creation?

American public schools will never acknowledge, much less provide, the one and only correct answer to that all important life-, culture-, and civilization-defining question.

American public schools will always – by their very nature – do everything within their power to steer every mind under their charge in any direction but toward that one essential, life-restoring answer.

Because American public schools are consecrated to pursuing a Genesis 3 satanic model to the pursuit of knowledge.

This is the very foundation of State-managed children’s “education”.

He’s also given us yet another undeserved day to turn from our rebellion and submit to Him.

But in the moment before us now, we do have the matchlessly beautiful opportunity to repent, believe, and find Light in this present darkness, all by God’s grace, all for His glory, and all to our eternal benefit.

May He grant us the grace to do so.