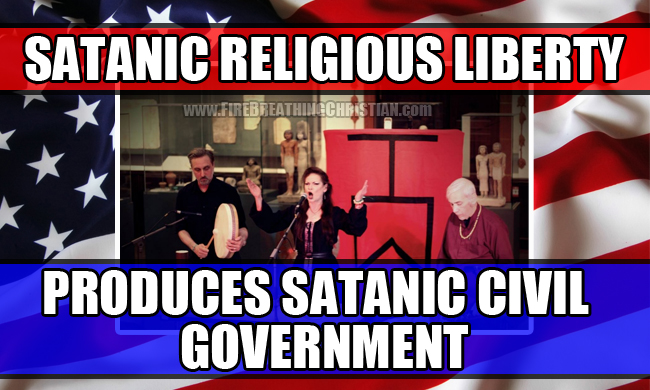 When “We the People” decided that we had the “right” to openly worship any god we like, then this what the real God was sure to give us in return.

Put another way: He’s given us what we want.

“We the people” will not have Him to rule over us? We will not obey His Word? We will not submit to His perfect, loving, life- and culture-sustaining Law?

Ruling over you, that is.

And that’s what we have now rising over America.

In an article concisely entitled Satanist Leads Invocation at Alaska Assembly Meeting, Ashley Rae Goldenberg chronicles the latest obvious (yet “shocking” to those who still refuse to grasp the obvious) steps being taken down the happy satanic liberty-paved road in America:

A debate over religious freedom has led to a Satanist leading an invocation at one Alaska borough’s assembly meeting.

Following a discussion over whether to do away with invocations entirely, the Kenai Peninsula Borough Assembly decided to open invocations up to all religions.

According to Assembly President Blaine Gilman, a group of pastors used to previously lead the assembly’s invocation. Under the new rules, however, anyone can choose to lead an invocation in the name of his or her religion.

During Tuesday’s assembly meeting, Iris Fontana led an invocation in the name of Satan on behalf of the Satanic Temple.

“Let us stand now, unbowed and unfettered by arcane doctrines, born of fearful minds in darkened times. Let us embrace the Luciferian impulse to eat of the tree of knowledge and dissipate our blissful and comforting delusions of old. Let us demand that individuals be judged for their concrete actions, not their fealty to arbitrary social norms and illusory categorizations.

Let us reason our solutions with agnosticism in all things, holding fast only to that which is demonstrably true. Let us stand firm against any and all arbitrary authority that threatens the personal sovereignty of all or one.

That which will not bend must break and that which can be destroyed by truth should never be spared its demise. It is done. Hail Satan.”

Apparently we have the “God-given right” in America to Hail Satan.

See how we got here?

See how much we hate God (and, as a natural consequence, love Satan) in America?

See how committed “We the People” are to embracing a satanic approach to religious liberty and equal treatment for all false gods including The Devil himself in direct contradiction of what the one true God has made plain in His life-preserving Word?

Apparently we’re at least committed enough to have Satanists lead invocations rather than take a stand for the supremacy of the one true God over the many false and destructive counterfeits that are even now ascending above us without any need for cloaks, masks or concealment.

Now the Satanists are out in the open.

They’re ready to help us take the next steps down the path of satanic liberty…and God will use them to do just that until and unless He breaks us of our pride and graces us with a spirit of repentance and submission to His Son as King in practice.

Those are our only two options.

As of right now, America is clearly choosing the latter.