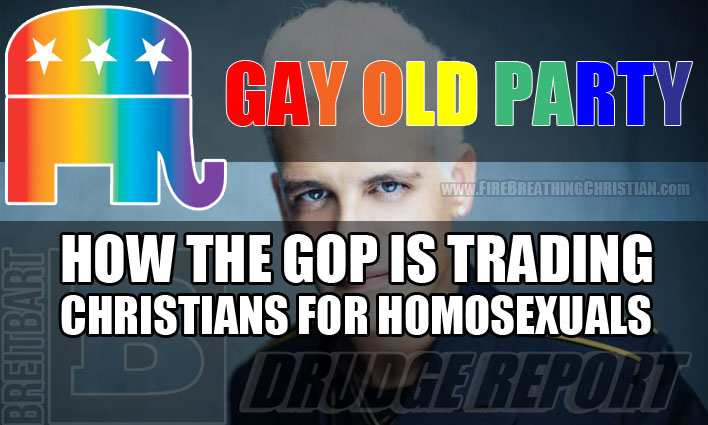 In case you haven’t noticed (and honestly, in order to miss it you have to be trying very hard to do so), the Republican Party is incredibly gay and getting more so by the minute.

While we shouldn’t need much in the way of convincing on this, I thought it might be helpful to those of you still in the closet of denial to share a little story from here where I live in the Bible Belt heartland of America (Middle Tennessee).

During the Republican National Convention one of our local “conservative” talk radio stations was covering the whole thing in detail, with several broadcasts streaming live from the convention in Cleveland. As I was rolling home from Nashville during RNC week, I tuned in to The Phil Valentine Show.

Providentially, I started listening the program just in time to hear Mr. Valentine spend a few minutes on air with Milo Yiannopoulos, a raging, flamboyant homosexual who’s rapidly gaining popularity due to regular promotion and gushing support from the likes of “conservative”-adored icons and media sources…apparently including Bible Belt “conservative” talk radio tools like Phil Valentine.

Milo is now a regularly featured writer and promoter of “conservatism” at Breitbart. He’s got fans in many of the Big Name “conservatives” roaming the countryside, including Ann Coulter, and is often pitched through the Drudge Report and Gateway Pundit blog. Milo has basically become, for a moment anyway, the most fabulously fruity face in a massive wave of homosexual (and pro-homosexuality) “conservatives” that is now molding American culture from a Pagan Right perspective.

This Pagan Right perspective, operating (knowingly or not) in conjunction with the Pagan Left, is aimed at defining and pursuing freedom, liberty, justice, law, truth, and even life itself through the lens of a thoroughly Pagan worldview. Pagan Right “conservatism”, just like its Pagan Left counterpart, is aimed at dismissing Christ and His Word as the basis upon which we understand and pursue politics, law, sexuality, family, art and everything else. Through these Pagan Right and Pagan Left perspectives, “We the People” are being encouraged (and increasingly coerced) into embracing a satanic approach to reality in every realm of life. That’s where all Christ-dismissive worldviews (aka “anti-Christ worldviews”) inevitably lead.

So back to Milo and Phil Valentine…

As Milo went on and on promoting himself and homosexuality by linking ’em up with conservatism, Phil just laughed and played along as Milo dove deeper and lower into the filth of what now passes for conservative thought in America.

[Language Alert – please skip the following paragraph if you’d rather not be exposed to the purposefully pathetic title of Milo’s self-promotion tour, which was mentioned repeatedly and discussed on The Phil Valentine Show.]

Listening to Mr. Valentine roll around on air with Milo was sickening, saddening, disgusting and revealing all at once. While there were many low points, one recurring trip to the gutter floor came when Phil laughingly entertained discussion about Milo’s ongoing tour, tabbed “The Dangerous Faggot Tour”.

[Okay, we won’t be repeating the name of the tour anymore, though we will be referencing it.]

Milo’s tour centers on college campuses, you see, and is aimed at promoting “conservatism”.

And Phil Valentine, so-called conservative talk show host on an American Bible Belt talk radio station, had nothing but yucks, giggles, jokes and support for Milo, who was allowed to ramble on and promote Pagan conservatism.

This is just one example, of course.

In the American Bible Belt.

This is the norm now. Pagan conservatism has brought us here purposefully over a very long period of time, and it’s leading us somewhere much darker in the soon coming future unless we repent, believe, and are saved. We are now in a period of open acceleration where the GOP replacement of Christians (with actual Christian worldviews) with homosexuals (or pro-homosexuality advocates with Pagan worldviews) is concerned.

The purge is on.

The Republican Convention made this (even more) plain just last month.

“Conservative” talk radio and media makes it more and more plain with each passing day.

And college tours like Milo’s help to put an exclamation mark on the whole deal.

God is giving us clarity.

Even so, we do like to pretend and cling to the excuses we imagine to be available, so to help rain on the parade of those still pretending along those lines, I’d like to share a recently published (at Brietbart) article by Milo (which was then promoted through The Drudge Report).

In Donald Trump Just Overtook The Democrats On Gay Rights, Milo shares the “conservative” gospel that has the likes of Phil Valentine laughing, joking, and leading whoever is listening to the slaughter. Here are some excerpts (with bold emphasis added):

The madman has actually done it. God-Emperor Daddy — known to the rest of you as Republican presidential candidate Donald J Trump — has just outflanked Hillary Clinton on the Left and announced what can only be described as an ultra-progressive immigration policy.

Well, no, it’s not, but it is the language of Pagan Conservatism, so get used to hearing it more and more loudly, more and more proudly, and more and more flamboyantly as the culture crashes into its grave under “conservative” anti-Christian guidance.

Now back to Milo…:

I don’t mean progressive as it has come to be used, of course — nannying, language-policing, Muslim-pandering. I mean it’s a policy that could actually make things better for minorities.

…aaaaaand here’s where Milo does the Pagan pro-perversion thing of linking homosexuality with things like ethnicity, so that homosexuality can be pitched as a legitimate (and therefore legally protected and empowered) minority.

It’s an old trick, true, but, as Scripture makes plain, Milo & Company are only able to deal in old tricks, stale spin, and retreaded rationalizations where the promotion of perversion is concerned.

Milo verifies this (again and again) as he continues:

Trump’s plan is to introduce a screening process for prospective immigrants to the U.S., testing their ideological commitment to western values like women’s rights, gay rights, and religious pluralism. It’s a brilliant plan. I’m especially inclined to say it’s brilliant because it may have been partly inspired by me.

Gay rights and religious pluralism. The two certainly do (and must eventually) go hand in hand, as we’ve chronicled here for years now.

When “We the People” believe that the open worship of false gods is “a God-given right”, we have gone completely off the rails and are destined for complete ruin, with homosexuality spreading like wildfire along the way.

The test will apply to all immigrants, yet its obvious target is Muslims, who, as we know, get a bit bomby in the presence of gays, a bit rapey in the presence of women who wear skirts shorter than their ankles and generally a bit hostile and violent around anyone who doesn’t have their bum in the air five times a day.

The media won’t portray this policy as progressive, of course — they’ll portray it as stupid, bigoted, and reactionary. The Washington Post, little more than a Hillary mouthpiece this election cycle, has already started, branding the proposal “crazy” and “outlandish.” But it isn’t. Actually, it’s about the most pro-gay policy I’ve ever heard from a presidential hopeful.

And what exactly would Daddy Trump (or his flagrantly perverse worshippers like Milo) do with those who preach the Word of God on, say, homosexuality?

Should those preachers be sent somewhere?

Does Milo think that the Word of God on homosexuality is hateful?

You bet he does!

And so do his gay (and homosexuality-encouraging) friends who are dominating the Republican Party.

This is what “conservatism” inevitably becomes once it’s severed from explicit subjugation to the Nature of God as revealed in His Word.

The GOP Purge of Christianity is on.

Out with Christian worldviews.

In with Pagan perspectives.

Out with the Gospel.

And most professing Christians in the land will not only fail to actively oppose it…they’ll support it.

They’re going to empower it.

They’re going to fund it.

They’re going to vote for it.

They’re going to fuel the ongoing adoption of Milo’s “conservatism”.

Why would professing Christians – including many conservatives – do such a thing?

Because they will not have Christ to rule over them.

“We the People” will not repent and submit to Christ as King in practice.

So we are getting exactly what we deserve: Milo and “conservatives” embracing pride, mocking repentance, and leading us in the promotion of perversion all in the name of “Making America Great Again”.