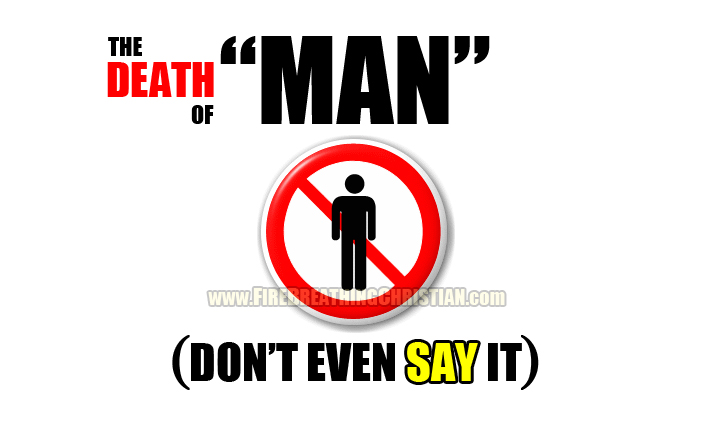 Right about a year ago in a post titled Murdered language, murdered babies, and how one leads to the other, we addressed the manner in which the purposeful perversion of language plays a vital role in both initiating and perpetuating the decline of a culture into ultimately terminal darkness.

In chronicling more recent steps being taken in America to obliterate the objective meaning of anything, earlier this month (in and article titled Princeton HR department: Don’t use word ‘man’) The College Fix provided us the following pathetic (though hardly surprising) details:

The Princeton University HR department has largely wiped the word “man” from its vocabulary.

The relatively new policy in effect at the Ivy League institution spells out the directive in a four-page memo that aims to make the department more gender inclusive.

Instead of using “man,” employees are told to use words such as human beings, individuals or people.

Other guidelines? Instead of “man and wife” use spouses or partners. Switch out “man made” with artificial, handmade or manufactured. Don’t use the verb “to man,” as in to work something, instead use to operate or to staff. Throw out workmanlike and replace it with skillful.

The memo goes on to list a variety of occupations that typically include the word “man” in them and offers replacements: business person instead of businessman, firefighter instead of fireman, ancestors instead of forefathers, and so on.

“Consistent with style guidelines issued by Princeton’s Office of Human Resources and Office of Communications, and as endorsed by the Institutional Equity Planning Group as a preferred University practice, HR has developed these gender inclusive style guidelines, to be utilized by all HR staff members in HR communications, policies, job descriptions, and job postings,” the memo states.

Are you paying attention, job seekers?

Are you noticing the fairly flagrant composition of a “mark of the beast” approach to economics going on here?

To openly proclaim a comprehensively Christian worldview in 2016 America is to increasingly set yourself apart from what most corporate and State HR departments consider to be the pool of viable new hire candidates.

The article rolls on:

In a statement to The College Fix, John Cramer, Princeton’s director of media relations, said the guidelines “reflect the university’s initiative of fostering an inclusive environment.”

Inclusive of those embracing a thoroughly biblical worldview?

That’s the economic reality into which we’ve allowed the culture to slide, Christian.

That’s the economic playing field on which we now find ourselves.

And lest you think this is a Big City or Liberal State problem, think again.

This is how the Bible Belt works now, too, as even this article reminds us:

Last year, the University of Tennessee’s Office for Diversity and Inclusion suggested students use the pronouns ze, xe, hir, hirs and zirs, along with others, for those who don’t identify with a particular biological sex. The University of North Carolina at Chapel Hill’s Writing Center developed an exhaustive list of words that contain potentially biased or offensive implications, such as businessman, policeman, and even freshman, so that students might avoid using them in their writing.

All systems that reject and repudiate the Lordship of Christ are destined to lead to the death of even the very things they claim to revere, cherish and love. Language, beauty, freedom, liberty, and even life itself must ultimately disintegrate into the blackness of rebellion against God until and unless there is repentance.

Apart from Christ, there is only a path to death. Sometimes that path may be long and winding, but its destination is fixed.

The death of “man” is just another step along the way.