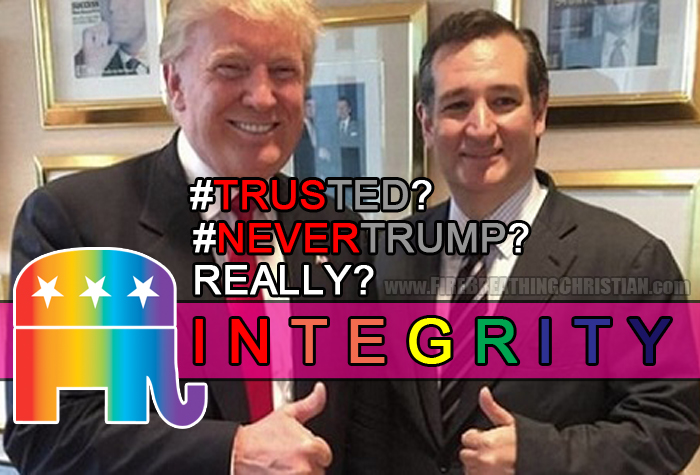 Not so much, it turns out.

Back in February, we asked: Would Ted Cruz endorse Donald Trump for President?

Responses were swift and plentiful from many Cruz-loving politically active American evangelicals. Their battlecry went pretty much like this:

How dare you even suggest such a thing!

Cruz is a man of honor and Christian conviction!

Cruz is a man of his word!

Cruz is a man of Christian principles!

Cruz is a champion of Christian values!

On and on it went.

Then, on Friday, Ted Cruz formally endorsed The Donald for President.

It also looks like God has given them (along with the rest of us) yet another giant, shimmering warning with regard to the America idolatry and propensity for easy manipulation through that idolatry that now permeates and defines the professing Christian subculture here in “the land of the free” and the home of the NSA.

So it’s not all bad.

There’s a lot to be thankful for.

We’ve been given yet another chance to wake up, repent, and submit to Christ as King in political practice.

In this context, it seems like a good idea to revisit some of what we shared back in the February post that “dared to question” Ted Cruz & Friends:

Looks like we have some clarity, whether we want it or not.

So the question now becomes: What will we do with the clarity provided through these answers?

Will we finally see the writing all over the wall and repent of our America idolatry?

Will we finally reject those who relentlessly pimp said idolatry?

Will we finally ditch our pride and admit that we’ve been fools?

Will we finally repent and stop defending the very chains that bind us?

Will we finally stand for Christ as King in political practice on His terms as recorded in His Word in accordance with His Gospel-fueled Great Commission?

Or will we just join Ted instead?

All while “wondering” why (oh why?!) America is going to hell on a rocket, of course…even though we’re the ones who keep fueling the rocket.