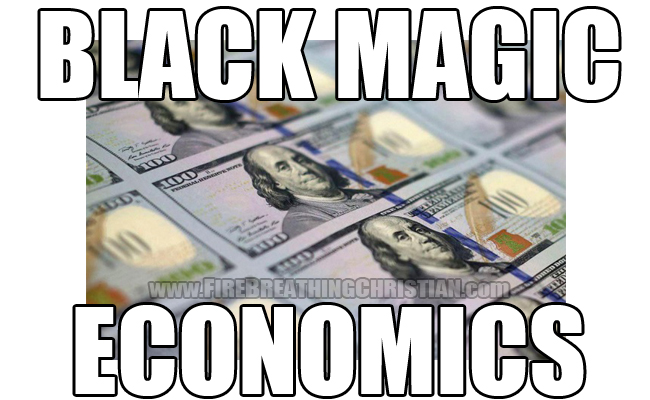 One of the very partial truths that Donald Trump shared in last week’s debate was his observation that The Fed (Federal Reserve) is propping up and inflating a bubble-driven economic fiction for political purposes.

That’s what fiat economics is all about.

As we’ve covered here again and again and again, our entire American economic construct is built upon a foundation of empowerment for an elite few who can magically craft dollars out of thin air, so that they might then use those dollars to control and direct everything and everyone below them. This is the fiat slavery system under which we now labor.

But did Trump decry the fiat economic foundation propping up everything from the welfare state and warfare state to the security state and entitlement state?

He was just mad that Fed Chair Janet Yellen was using The Fed’s power in a way that was politically beneficial for Barack Obama and Hillary Clinton at the expense of Donald Trump.

The problem, according to Trump, isn’t that The Fed and its flagrantly anti-Christ approach to slavery-enabling economics exists in the first place. Oh no, to the likes of Trump, the problem is that The Fed is using its wildly unbiblical power to create and sustain artificial economic constructs badly. The Fed just isn’t using its evil power wisely, you see.

So mark it down: Trump is no enemy of the fiat economic/fiat slavery system that has allowed him to make billions while the masses are buried and controlled under the ever-increasing weight of an economic construct described in Scripture as an abomination. No, he’s all for fiat economics and our continued descent into fiat slavery. Just in ways that help him more.

In this context, let’s have a gander at the latest steps being taken even now in The Fed’s ongoing descent into economic insanity as it id driven deeper and deeper into increasingly desperate actions in order to prop up its destined-to-fail system of slavery and control.

As reported recently at ZeroHedge, The Fed and its fans are now openly hinting at actually having The Fed just flat out buy stocks in order to keep the stock bubble going just…a…little…longer:

During her latest testimony in Congress, when asked by rep Mick Mulvaney if the Fed has considered buying equities, Janet Yellen had a cryptic, yet open to interpretation answer: “the Federal Reserve is not permitted to purchase equities. We can only purchase U.S. treasuries and agency securities. I did mention in a speech in Jackson Hole, though, where I discussed longer term issues and difficulties we could have in providing adequate monetary policy. Accommodation may be somewhere in the future, down the line that this is the kind of thing that Congress might consider.”

Then, the very next day, during a video conference Q&A, Yellen once again unexpectedly latched on to the topic of the Fed buying stocks, saying that “the idea of expanding into areas like equities might be “good thing to think about,” noting that (for now) The Fed is more restricted in which assets it can purchase than other central banks. If we found, I think as other countries did, that they could reach the limits in terms of purchasing safe assets like longer-term government bonds, it could be useful to be able to intervene directly in assets where the prices have a more direct link to spending decisions.“

Assets such as equities.

Then, jumping on to the idea of nationalizing the stock market, none other than the world’s most farcical former econopundit, Larry Summers, who has plunged to such recent depths he has to retweet himself on Twitter to get page views for his blog, “floated the idea of continuous purchases of stocks as a potential ingredient in a recipe for the developed world to strengthen economies struggling with subdued growth and inflation.”

Cited by Bloomberg, Summer said that among the proposals that deserve “serious reflection” is the purchase of a “wider range of assets on a sustained and continuing basis,”. . .

It got even funnier when Summers said that “there are obviously important political and economic questions associated with government ownership of companies,” adding that “some critics could term such a policy as “socialism, while others could highlight that governments already buy stocks in other ways, such as in the U.S. for federal employee pension funds.“

The American economic insanity gets nuttier and crazier by the minute, doesn’t it? (Yeah, that’s a trick question.)

But remember: The fact that the American fiat slavery system must (and soon will) come crashing down is not to be feared by Christians as it is feared by unbelievers in America and throughout the world. The death of this beast will usher in a wave of opportunities the likes of which have not been witnessed for hundreds of years.

So it’s a good thing.

A great one even, in the long run anyway.

It’s a necessary (albeit painful for many) step towards true freedom, prosperity, and liberty, as defined biblically (which is another way of saying “as defined accurately).

God is giving His people both great clarity and precious time to prepare as this beast lumbers in circles ’round its grave en route to certain death.