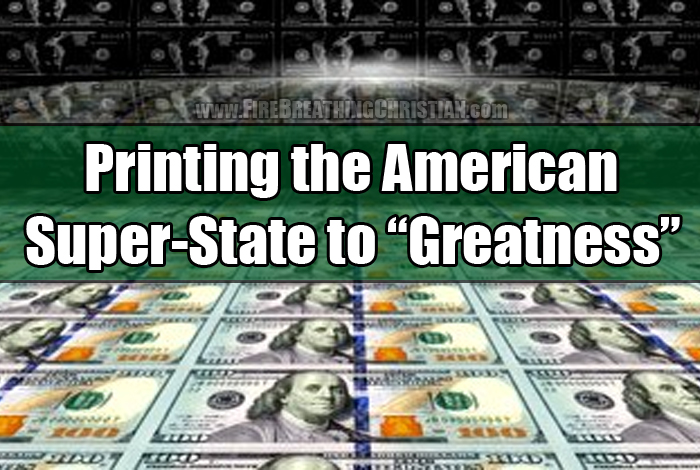 Need to prop up the satanic/Socialistic constructs of Social Security and Medicare just a little bit longer?

Need to keep those Temples of American Statism known as “public schools” rolling so that they can crank out the next generation in a long run of increasingly more anti-Christ, pro-Corporate/State drones?

You guessed it: Because “We the People” can and will simply print more fake money.

Even most professing Christians in America agree, and now that it’ll be a Republican firing up the printing presses, they’ll be ten times as excited about the whole process as they were when the “evil Democrats” were “spending future generations’ wealth away” to feed their diabolical Socialist programs here and now.

As long as it’s Republicans propping up the satanic/Socialist constructs of public schools, Social Security, Medicare, and a wicked/awesome War Machine capable of militarily dominating the globe, then it’s all good.

And here’s where it’s gonna take us:

A few decades from now, when the Socialism-embracing (think: Social Security), Marxism-fueling (think: public schools) “conservatives” from “The Greatest Generation” and their direct offshoot, the Baby Boom generation (who, thanks in large part to bad parenting, went on to thoroughly derail the culture), are dead and gone, the mountain of debt left in their wake for their grandchildren and great grandchildren to dig out of will be practically insurmountable and the cultural carnage associated with it will be downright hellish.

But hey, in the meantime, the markets are rockin’!

The dollar is surging!

Pop the Champaign, put on your dancin’ shoes, and let’s party!

Happy days are here again, thanks of course to America’s imminent return to greatness under Donald Trump!

This is the spirit of our age.

This is the insanity that has gripped the “conservative Right” in America, much of which imagines and/or proclaims itself to be Christian.

But what exactly is fueling these runaway bull markets?

What is fueling the hope that The Donald will increase America’s military size and quality, protect all entitlement programs, and likely launch a ginormous new infrastructure rebuilding campaign as one of many ways to “Make America Great Again”?

Why the printing of even (and ever) more fake money, of course.

That’s the trick – the one and only trick of the One Trick Pony that is the American Super-State when it comes to economics, whether “led” by Republican or Democrat figurehead.

Markets are mysterious things to most Americans, and when they see the stock market go up or the dollar surge for a bit, they just think: That’s awesome!

Having been didligently shielded from critical concepts at the core of our satanic fiat-currency-fueled economic system, they have no idea what’s really going on, Morover, having been religiously programmed through State-managed “schools”, State-licensed “pastors” and Corporate/State-controlled pop culture, they don’t want to know.

They don’t want to know the truth.

They don’t want to deal with reality.

They want the lie.

They want the ease.

They want the comfort, and they want that comfort uninterrupted.

They want the idol; the America Idol and its American Dream.

They don’t want to face any number of glaringly obvious but quite challenging realities, including:

So on and on we go, ignoring these realities while chasing after the ruin that will surely come unless, by God’s grace, we actually and supernaturally repent of our satanic approaches to economics, business, education, law and civil government.

Along these lines, there was yet another pertinent and helpful article posted recently at ZeroHedge, which provided the following tidbits of (sure to be mostly ignored) clarity and warning with regard to where we’re likely to be going in the next phase of expanded American State power in name of Making America Great Again:

“The driving catalyst behind the furious market rally since the presidential election has been the market’s hope that Trump will unleash a “huge”, still undetermined, debt-funded financial stimulus package, which will grease the volatile handover from monetary to fiscal policy, boosting inflation and rerating risk assets higher. Indeed, the market was so transfixed by this hope, that it has so far ignored all warning signs, duly noted previously on this website.

Nearly a month ago, we warned that when comparing Trump’s proposed budget and the House’s own budget blueprint,  “An Unexpected $12 Trillion Hole Emerges In Donald Trump’s Plan To “Make America Great Again“.”

As we first demonstrated, there was a massive $12 trillion debt difference between the plan that Trump espoused, which envisioned a $5 trillion cumulative increase in debt…

Debt Under Central Estimate of Candidates’ Proposals (Percent of GDP)

… compared to the budget blueprint approved by the house earlier this year, which in turn seeks to reduce the deficit versus current projections by $7 trillion over the next ten years, mainly through spending cuts: the result is a $12 trillion “hole” between the Trump and the House budgets.

We followed up just a few days later with “A “Big Problem” Emerges For Trump’s Economic Plan“, where we reported that while the market may (still) be blissfully unaware about the emerging conflict between Trump’s debt-fueled vision for the future, Republican politicians had started to notice. As we wrote, Republican lawmakers warned “that there could be a major obstacle to enacting President-elect Donald Trump’s agenda: the national debt.”

. . . “We did not hear anything about entitlement reform from either of the candidates, and that’s a serious issue,” said Michael Sargent, a research associate at The Heritage Foundation. “You cannot address the growth in spending without addressing entitlement issues.” . . .

This is what anti-Christian approaches to economics, politics, law, and civil government look like.

Putting a Trump logo, a Republican (R), or an American flag on top of this dung pile doesn’t make it any less a dung pile.

Lord willing, we will finally fully repent of and reject our long-running dung-dominated diet of anti-Christian politics, government and economics.

Until that happens, we should only expect more of the same….while stocking up on breath mints.