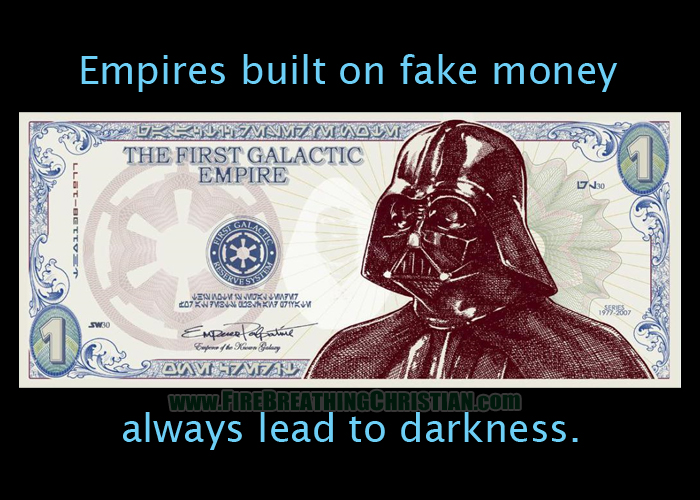 Lest we allow ourselves to be swept up (again) in the avalanche of distractions being hurled our way from every angle (again) where the economic health and vitality of America are concerned, it’s important to remember and constantly remind ourselves of a few key points:

These are important things to remember as propaganda spews our way through most televisions, radio stations (including “conservative” talk radio, which is all about America idolatry and propping up the lies that keep the Idol limping along), many pulpits, and, of course, all public school classes on civics, economics, and the like.

Yet as the same old lies roll on and on as they always have, the cracks in the System of systems are beginning to show, even to many who have been trying their best to look away and pretend in accordance with what their teachers, leaders, politicians and pastors have told them for all of their lives.

As those signs of serious flaws/weakness begin to clearly make themselves plain and – more importantly – a growing number of people begin to actually take the Word of God seriously on things like law, politics, government and economics, we are entering not only a time of great danger and potential darkness, but also a time of great opportunity for profound life-, culture-, and civilization-reforming (and thereby resurrecting) reform in the realms of economics, law, and government.

We are being blessed with access to information, tools, and technologies as never before – tools and techs that are enabling individuals and small groups (like families and local church bodies) to do amazing things that were unthinkable not long ago. And the trajectory is up – almost exponentially so. The likely path forward from here will see God grace us with the sorts of things that will make the radical decentralization of power a reality.

Many of our children can and will likely, all by God’s grace and in His good timing, be blessed with the sorts of individual empowering tools that, when applied, honed, improved, and spread throughout the culture, can and will bring down many of the largest systems seeking to control us now through satanic means…like fiat economics and the many systems it fuels.

To help remind, equip, and inspire us to keep our eyes on the ball as we do our part in this amazing time in which God has placed us, I want to share what I think is a very helpful article posted by The Money Project featuring some supercool and impactful graphics.

The article is entitled Currency and the Collapse of the Roman Empire. You need to see this, so here it is:

Currency and the Collapse of the Roman Empire

The Money Project is an ongoing collaboration between Visual Capitalist and Texas Precious Metals that seeks to use intuitive visualizations to explore the origins, nature, and use of money.

At its peak, the Roman Empire held up to 130 million people over a span of 1.5 million square miles.

Rome had conquered much of the known world. The Empire built 50,000 miles of roads, as well as many aqueducts, amphitheatres, and other works that are still in use today.

Our alphabet, calendar, languages, literature, and architecture borrow much from the Romans. Even concepts of Roman justice still stand tall, such as being “innocent until proven guilty”.

How could such a powerful empire collapse?

Trade was vital to Rome. It was trade that allowed a wide variety of goods to be imported into its borders: beef, grains, glassware, iron, lead, leather, marble, olive oil, perfumes, purple dye, silk, silver, spices, timber, tin and wine.

Trade generated vast wealth for the citizens of Rome. However, the city of Rome itself had only 1 million people, and costs kept rising as the empire became larger.

Administrative, logistical, and military costs kept adding up, and the Empire found creative new ways to pay for things.

Along with other factors, this led to hyperinflation, a fractured economy, localization of trade, heavy taxes, and a financial crisis that crippled Rome.

The major silver coin used during the first 220 years of the empire was the denarius.

This coin, between the size of a modern nickel and dime, was worth approximately a day’s wages for a skilled laborer or craftsman. During the first days of the Empire, these coins were of high purity, holding about 4.5 grams of pure silver.

However, with a finite supply of silver and gold entering the empire, Roman spending was limited by the amount of denarii that could be minted.

This made financing the pet-projects of emperors challenging. How was the newest war, thermae, palace, or circus to be paid for?

Roman officials found a way to work around this. By decreasing the purity of their coinage, they were able to make more “silver” coins with the same face value. With more coins in circulation, the government could spend more. And so, the content of silver dropped over the years.

By the time of Marcus Aurelius, the denarius was only about 75% silver. Caracalla tried a different method of debasement. He introduced the “double denarius”, which was worth 2x the denarius in face value. However, it had only the weight of 1.5 denarii. By the time of Gallienus, the coins had barely 5% silver. Each coin was a bronze core with a thin coating of silver. The shine quickly wore off to reveal the poor quality underneath.

The real effects of debasement took time to materialize.

Adding more coins of poorer quality into circulation did not help increase prosperity – it just transferred wealth away from the people, and it meant that more coins were needed to pay for goods and services.

At times, there was runaway inflation in the empire. For example, soldiers demanded far higher wages as the quality of coins diminished.

“Nobody should have any money but I, so that I may bestow it upon the soldiers.” – Caracalla, who raised soldiers pay by 50% near 210 AD.

By 265 AD, when there was only 0.5% silver left in a denarius, prices skyrocketed 1,000% across the Roman Empire.
Only barbarian mercenaries were to be paid in gold.

With soaring logistical and admin costs and no precious metals left to plunder from enemies, the Romans levied more and more taxes against the people to sustain the Empire.

Hyperinflation, soaring taxes, and worthless money created a trifecta that dissolved much of Rome’s trade.
The economy was paralyzed.

By the end of the 3rd century, any trade that was left was mostly local, using inefficient barter methods instead of any meaningful medium of exchange.

During the crisis of the 3rd century (235-284 A.D), there may have been more than 50 emperors. Most of these were murdered, assassinated, or killed in battle.

The empire was in a free-for-all, and it split into three separate states.

Constant civil wars meant the Empire’s borders were vulnerable. Trade networks were disintegrated and such activities became too dangerous.

Barbarian invasions came in from every direction. Plague was rampant.

And so the Western Roman Empire would cease to exist by 476 A.D.

How’s that for some helpful info?

And how’s that for some insight into America’s future under the satanic construct of fiat economics?

And act upon as we are able, all by God’s grace and all for His glory.