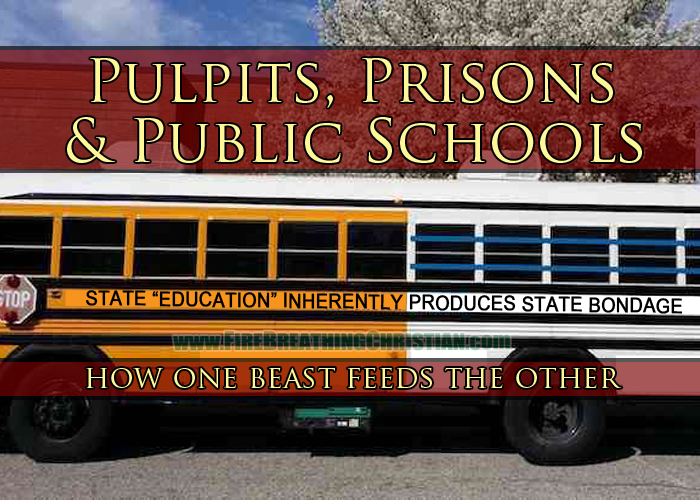 If the State is allowed to “educate” children, most of those children will – by design – become more inclined toward a State-centered worldview.

While some children passing though this system may, by the grace of God, be preserved from such transformation through this process, most will not.

And that’s good enough for the State.

In the long run and from a multi-generational perspective, most is more than enough.

As a result of this training, the vast majority of these long-term disciples of the State will be more and more inclined to trust and depend upon the State to do and “take care” of things that the Word of God has clearly reserved to individuals, families and/or the church.

They will become more and more skeptical and dismissive of Scripture as the standard by which much of anything in “the real world” is to be understood or pursued.

They will become more and more anti-Christian in worldview and practice.

And that’s the point of State-managed discipleship. That’s the purpose of State-run Temples of Statism (aka “public schools”).

This much is (or should be) obvious.

Because so many of us have been discipled by the State in State-run institutions consecrated to a theory of education (the pursuit and application of knowledge) lifted directly from the serpent’s tongue (as recorded in Genesis 3).

We believe by default that we can, should, and must encourage the pursuit of knowledge apart from submission to the revealed Word of God.

This is our programmed presupposition for all of life.

This is our State-programmed presupposition with regard to politics.

This is our State-programmed presupposition with regard to business.

This is our State-programmed presupposition with regard to law.

And this is our State-programmed presupposition with regard to crime and punishment.

This is the core philosophy of education first introduced by the serpent to Adam and Eve in Eden, and this is the core philosophy of education embraced and programmed into the minds of our children by the State in its public schools. Until we get and appreciate this single point, we’re not going to find our way to true freedom, true liberty, true prosperity, and true security through true education.

Until we identify and address the clearly satanic origin of our approaches to education, law, economics and government, we’re destined to continue the long slide into darkness that has been defining American life and culture for many generations now…which is precisely why those who desire darkness wish to keep us from such recognition, repentance and restoration.

The State is not in the business of educating in a manner consistent with the notion of Christ as King and the Word of God as the standard by which anything is to be pursued because the State reserves those titles and roles for itself.

“We the People” in the form of the American State are our king.

We are our god.

We define terms, and by our definition of those terms we define the broader reality in which we live.

Nothing is settled until “We the people” settle it…and once we settle it we reserve the “god-given right” to revise it later.

This basic idea of man-centered authority apart from the Nature of God as revealed in His Word is our core.

“We the People” believe this core concept emphatically and love it passionately.

It is fundamental to modern Americanism.

Which is why we’ve become more and more inclined (and more easily manipulated) into supporting more and more overtly anti-Christian systems and approaches to life as we’ve sent generation after generation further down the State-run “education” rat-hole.

Last week in Confronting And Correcting The Prison Industrial Complex we touched on one of the wildly unbiblical and (therefore predictably) destructive systems that even most “conservative Christians” in America not only tolerate, but, more often than not, passionately defend.

In the wake of that article (which I’d encourage you to read if you haven’t already by clicking here), it seemed worth noting that, despite recent campaigns used to promote the public school system as something of an antidote or antithesis to the State-managed prison industrial complex, the two systems are, in fact, deeply intertwined and interdependent, with the growth and entrenchment of each one largely dependent upon the existence and operation of the other.

Gigantic unbiblical mega-systems like the Prison Industrial Complex could never even get off the ground, much less expand to the point of being gigantic, in a culture where Scripture was taken seriously as the standard by which we are to live.

And by “the standard by which we are to live” I mean in detail.

I’m not talking about the vague, flaky, practically useless (and purposefully so), hyper-spiritualized approach to Scripture advocated by most Christians, most pastors, and virtually all professing Christian teachers (by example) in State-run children’s schools.

I’m talking about the actual lordship of Christ.

Not the token, prop version.

Where His Word is loved, sought, and obeyed as He has commanded and equipped His people to seek and obey it (see: Matthew 28:18-20), such things as the Prison Industrial Complex cannot gain traction, much less grow into anything like the massive beast we see sprawled out all around us today.

Where the Spirit of the Lord is truly present, there is true liberty…true freedom…true peace…true prosperity.

As opposed to what we have here now in “the land of the free” and the home of the NSA.

It is the design of our situation – the purposefulness of it from the perspective of those advocating an anti-Christ American culture and civilization – that promotes and relies upon things like State-run “education” in order to cultivate a climate conducive to the creation and endless expansion of other satanic constructs like the Prison Industrial Complex.

State-run “education” systems program each successive generation to be more Statist and more anti-Christian than the last while the State-managed Prison Industrial Complex crushes countless families and communities by abandoning biblical pronouncements on law, crime, and restitution, replacing them with State-centered, State-serving approaches to punishment, correction, and reformation.

One beast feeds the other.

Both beasts grow and grow.

All while thousands of 501 (c)(3) State-licensed “church leaders” openly and pathetically abdicate their obligation to confront the beasts in question.

Because most of the pastors and preachers in question were thoroughly discipled by the State from the age of 5 to the age of 18.

And they don’t even know it.

They don’t even see it.

They have no idea they’ve embraced the serpent’s call to knowledge just as surely and plainly as Eve in Eden.

Such State-programmed church leadership is one of the greatest and most destructive consequences of multi-generational State-run “education” in America.

That’s the prison in which we find ourselves.

May God grace His people with leaders who will model repentance and obedience to His Word on children’s education, crime, punishment, and everything else.

Only then will evil systems fall and true freedom come to this land or any other.