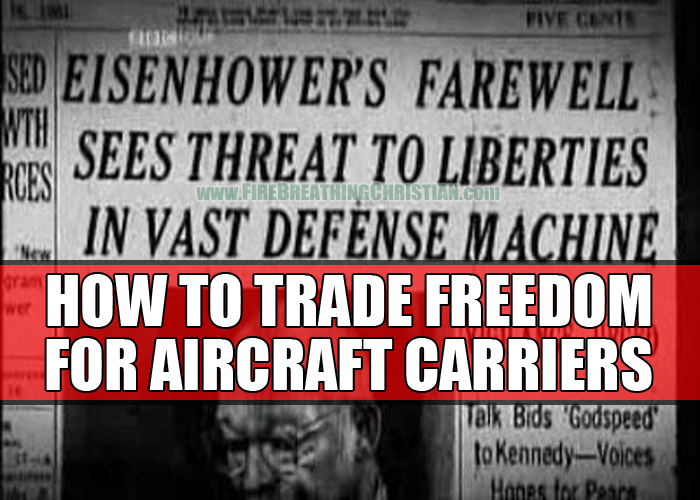 Remember when self-identified fiscal conservatives at least pretended to be fiscally conservative to the point that they advocated for a small military that should never be used to wage unbiblical wars or perpetuate a globe dominating empire based on things like the “freedom” to openly worship false gods?

Remember when self-identified Christians used their political power to actively and aggressively advance the Gospel-fueled Great Commission through the God-given, God-defined, and God-owned tools of law, politics, economics and civil government?

At any rate, here we are in 2017 America, showing no signs of even inching slightly toward repenting of our prideful, evil approaches to any, much less many, of the systems being used right now to perpetuate the Orwellian nightmare that is the American Welfare/Warfare SuperState.

With a new Republican figurehead about to take the lead role in DC for this cycle of the American Political Puppet Show, we are once again hearing much noise regarding how we have to build up, modernize, and/or generally improve our flagging military.

Despite the fact that we’re broke, of course.

So much for fiscal conservatism.

Or sanity of any kind, for that matter.

Even so, we are almost certainly about to embark on yet another wave of feeding the massive, globe-spanning, empire-propping beast that is the wildly unbiblical American military.

That noted, it seems like a good time to take an honest look at a few things before the propaganda kicks into high gear and we are all prompted to beg enthusiastically for another wave of aircraft carriers, fighter jets, tanks and such so that we can continue to be ‘Merica.

Never mind that President George Washington’s farewell address featured him begging, pleading and warning against our being involved in foreign entanglements.

Never mind that President Dwight Eisenhower’s farewell address featured him warning us against the incredible, freedom- and liberty-threatening dangers of the military industrial complex.

Nah, no need to worry about – or even remember – those things…or so the powers atop the modern American Corporate/State would have us believe.

But in a neat little article entitled The US Navy’s $13 billion answer to China and Russia, Fiscal Times reminds us of just how comically and suicidally moronic our approach to all things military has become (with bold/underline emphasis added):

“China’s lone aircraft carrier, the retrofitted Liaoning, has spent the past several weeks cruising around the South China Sea. It recently passed through the Taiwan Strait, which seen by some observers as a threatening message to Taiwan’s president, Tsai Ing-wen.

The Taiwanese president, of course, set off diplomatic red alerts when she phoned Donald Trump to congratulate him on being elected president – and he took the call in what Beijing considers a violation of the “One China” policy in place since 1979.

But if China’s intent was to shiver a few timbers by its display of naval might, the American military might have reason to take the warning lightly. The Navy just announced that after delays, the $13 billion supercarrier USS Gerald R. Ford – the most advanced and expensive aircraft carrier every built – will be ready for delivery by April.”

Just to recap for those who get lost easily or are prone to miss very important facts: China has one aircraft carrier.

Hence the term “lone aircraft carrier” at the beginning of the story there.

Maybe write it down.

Then note that, at the end of the above snippet, we see that the US Navy (operated by the debt-nuked United States) is about to roll out a brand spankin’ new $13,000,000,000 supercarrier named after American Globalist/Statist and former President Gerald Ford.

And, as we’re told here, the USS Gerald Ford will be the most advanced and expensive carrier ever built.

And that’s not all…not by a long shot…

“The Ford will be the first of a new class of carriers being built as part of a $40 billion program, and it will be one of nine new vessels the Navy is adding in 2017. They include four littoral combat ships, two destroyers and two submarines.”

After all, the Corporate/State can print/type as much of that stuff into existence as it wants, so why worry?

Back to the article:

“In its 2016 index of U.S. military strength, the conservative Heritage Foundation gave the Navy a “marginal” rating. And there was no shortage of talk in the past election year about the American military falling behind. But it’s hard to make the case that the Navy is outgunned when it comes to aircraft carriers: It currently has 10 1,000-foot Nimitz-class carrriers in service.”

Feel free (and please be encouraged) to re-read that paragraph a few times.

The US has 10 Nimitz-class carriers, the Ford is about to roll into action, and we’re at “marginal” strength?

The hits keep a-comin’ as the article rolls on:

“The Ford class ships, which are designed to accommodate the F-35 fighter jets, would be a game-changer if there was another country even in the carrier game in a meaningful way.

A column in Bloomberg View early last month described Russia’s “embarrassing aircraft carrier” the Admiral Kuznetsov — the only active one in its fleet — as lumbering along “belching black smoke, accompanied by tugboats standing ready to tow because of frequent breakdowns.” The column by Tobin Harshaw also referred to media reports saying that plumbing problems has reduced the number of latrines to 25 for a crew of 2,000.

Harshaw suggested that the Kuznetsov might be worth more as scrap metal than as a projection of Valdimir Putin’s military muscle.”

And we need three super-expensive supercarriers to go along with our 10 Nimitz-class ginormo-carriers?

Only in America – the “land of the free” and the home of the NSA – could something like this make sense.

We can’t even own a home outright in America. (To learn more about this important truth, check out: How “free public schools” make us all renters from the State.)

So much for freedom!

The State claims the power and authority to “educate” our children (by immersing them in the very religious worldview of American Statism, of course). (Check out: Temples of the State: The VERY Religious Mission of American Public Schools.)

All while the so-called “conservatives” among us cheer and champion the insanity of more and more and more military spending. (For more on this, check out: How can a “broke” country have the biggest military in the world?)

Maybe the Navy (and Army and Air Force and Marines), right before being radically downsized to biblical/sane levels, could, for at least a minute or two, be put to use defending our actual, real-life freedoms from Washington DC for a change?

But we all know it won’t happen.

‘Cause all o’ those carriers, jets, armies, drones and bombs are DC’s tools of control.

And “Christian conservatives” in America seem to like it that way.

May God grace us with repentance and freedom from such “conservatism” and the tyranny it promotes…while there is yet time.