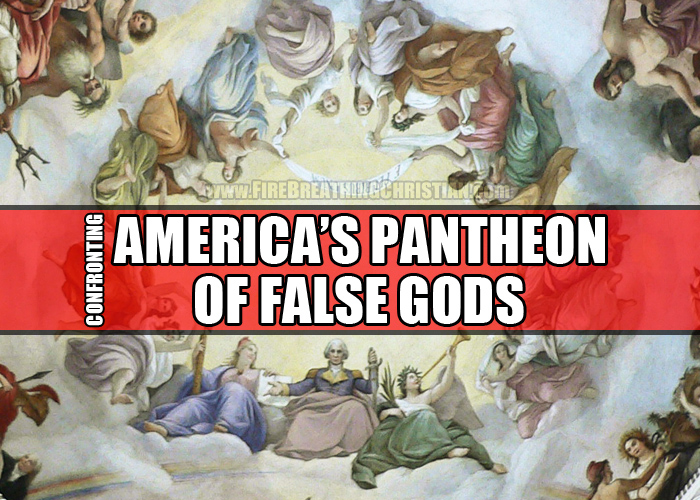 One recurring theme on the “conservative” side of the never-ending public school debates raging across America is the emphatic pleading for more accurate and detailed inclusion of the Founding Fathers in our State-run children’s education process.

Literally millions of professing Christians all across the fruited plain have no trouble whatsoever loudly, proudly, and aggressively arguing for more accurate and more detailed teaching about the likes of George Washington, Thomas Jefferson, and James Madison in public schools. These passionate pleadings routinely incorporate the notion that more accurate, detailed instruction concerning our Founding Fathers is absolutely essential to children’s education.

Along those lines, over just the past week or so I’ve heard at least three different people plead a version of the “if we don’t know our history, we’re doomed to repeat it” line.

So what about this idea of being doomed to repeated error if left blind to one’s true history? Is that not a real danger?

You betcha it is!

Which explains a lot about why we seem to be so doomed in America right about now, and which also seems to beg the question: What is true history?

What is a solid, secure education where the subject of history is concerned?

What does it require?

What are its essential components?

Is it essential that American children be taught accurately and in detail about George Washington?

Before answering that, consider the word “essential” there in the question.

Zero in on that one.

Now ask yourself these questions:

Who, if anyone, might be essential to a right understanding of history – all history, American included?

Who, if anyone, is essential to a right understanding of any subject at all, from economics and education to law and civics?

Could there be such a person?

Put another way: What about Jesus?

Is He infinitely more essential to children’s education than anyone else?

Of course He is.

As the Author, Sustainer, Definer, and Owner of all things in His creation (including both material and immaterial things in any place and at any point in His creation of time), He is the essential focal point of all studies on all subjects. (See: Colossians 1:15-20.)

Yet somehow, some way, bajillions of self-identified conservative Christians in America seem to think they can fix the unfixable (public schools), not by repenting of unbiblical approaches to the pursuit of knowledge and submitting to the Word of God on education, but by getting more Founding Fathers in there.

Yeah, that’ll do it.

No need for explicit submission to Christ as the Author and Owner of art, math, civics, law, business, economics, politics, and education.

Nope, no need for that.

Why are so many “conservative Christians” even now trying to prop up a State-run children’s education system built upon the foundation presented by the serpent in Eden? (See: Genesis 3.)

Why are these self-identified conservatives fighting tooth and nail for more accurate coverage and inclusion of Washington and Jefferson while leaving Jesus the reigning King of creation on the sideline?

Because that’s what the American State has taught them to do.

That’s how the American State has conditioned them to think about Jesus and what is or is not essential to children’s education.

They’ve been conditioned to accept the American State’s definitions of all things, even (and especially) when those All-American definitions flagrantly contradict the Word of God.

That’s how you get “Christians” standing and fighting for more George Washington to be included so that public schools might be “fixed” while never even considering uttering a peep about Christ as the one true essential core for all children’s education.

After generations of State-managed mind-sculpting, now even American “conservative Christians” are overwhelmingly supportive of explicitly unbiblical approaches to law, politics, business, and education. We’ve been conditioned to embrace as essential the idols and icons that empower the American State, while dismissing the One who is truly essential to the pursuit and preservation of true life, liberty, freedom, and justice.

An American State-run education system whose foundation is lifted directly from the serpent’s tongue (in Genesis 3) cannot be “fixed” by more George Washington. Heaping on more idols will only add to the problem, even if said idols are named Jefferson and Adams.

Public schools are as “fixable” as strip clubs. If true Christ-honoring reform actually comes their way, the resulting change would be so fundamental that they would simply cease to be anything resembling what they are now.

You can’t have a strip club without strippers.

And you can’t have “religiously neutral education” without embracing the serpent’s approach to knowledge as first pitched in Eden.

May “We the People” repent and educate accordingly.