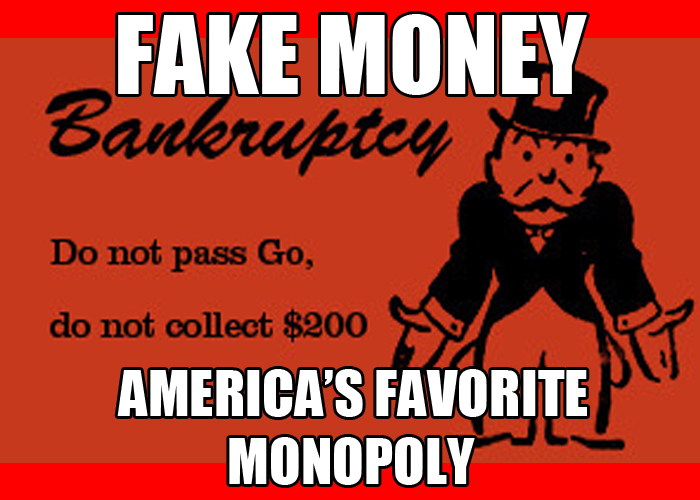 For all the talk and increasingly laughable American State manufactured propaganda aimed at selling us on the notion that we’re living in “the land of the free”, the increasingly obvious reality is that the fiction we’ve been sold bares little resemblance to the largely monopolistic, crony-encrusted, fundamentally rigged, elite-dominated reality in which we live.

To get a handle on just how completely contrived and artificial our American System of systems really is, consider just one of the great State/Corporate monopolies that currently dominates and defines life here in “land of the free”: The American Corpo-State monopoly on magic currency (or: a monopoly on the production of fake money).

If you or I attempt to create money or currency out of thin air using a printing press, we are said to be committing a crime. We are said to be counterfeiters. We must be dealt with; such activity cannot be tolerated.

Why the “legal” counterfeiters, of course.

You see, when the powers atop the American Corporate/State literally print (or type) money or currency into existence out of thin air, that activity is not called counterfeiting. Or fake wealth creation. Or black magic economics. It’s called “what government does”. And because it’s “what government does”, it’s totally legit.

Just to recap here: They can print money at will, with no objective, externally imposed limitation on their magic money printing, and then use the trillions in phony cash that they make out of nothing to control and own everyone and everything beneath them. We, on the other hand, cannot make money the way that they do and are told that we are constrained to chase after the scraps that they choose to offer to us through their System of systems.

Can such an arrangement be reasonably described as even remotely resembling a freedom enabling system?

Unless you’re talking about the freedom of the elites atop the system to dominate and practically own the masses kept in bondage through the system in question.

This monopoly on magical money creation is just one of many monopolies used to fuel the power and feed the growth of the All-American Corporate/State System.

This monopoly on fake money creation works hand-in-glove with other State-claimed monopolies, including monopolies on law and force. By agreeing to place the word of the State above the Word of God where law is concerned, “We the People” made the State our god in practice. That god, “freed” from explicit subjugation the one true God, then immediately (and quite predictably) went about the business of claiming and establishing for itself a variety of other monopolies.

The State’s claim to authority over children’s education is a prime example – and a primary means by which the State has thoroughly converted the American culture into what it is today.

Where Scripture gives the State no role whatsoever – none! – in children’s education, now even the vast majority of professing Christians in the land believe that the State must supervise children’s education in accordance with – get this – an thoroughly anti-Christ philosophy of education lifted directly from the serpent’s tongue in Genesis 3.

The American State now claims all manner of authority in every area of life, whether democrats or Republicans are sitting in any particular seats of power at any given time. And it is only able to advance its Orwellian surveillance/welfare/warfare state agenda by way of its monopoly on the black magic economics of fiat currency.

Apart from its ability to produce artificial wealth on cue in the form of dollars, the American System could not sustain its massive military or welfare state for any meaningful amount of time. It would all collapse, and quickly.

So it is that the vast majority of even self-identified conservative Christians in America have become adoring worshipers of the abomination of fiat economics.

Without the All-American State-claimed monopoly on fake money use, the America Idol would fall faster than a bum on a bologna sandwich.

And we can’t have that, now can we, in a land defined by America Idol worship?

Nope. Not yet anyway.

Which is why we keep doing anything and everything but repent of our absurd American claims to do so many things that God has explicitly condemned.

We seem to want God to actually save (or prop) up our satanic systems much more than we want Him to deliver us from them.

We seem to want to believe (or, worse yet, actually believe) that overtly anti-Christian approaches to law, economics, and education can somehow “be fixed” or “made to work” if only we have the right leadership. And by right leadership, we don’t mean biblically-sound-in-detail leadership. We mean secularly pragmatic leadership, with success defined by secular terms. (Trump, anyone?)

We seem to prefer pride over repentance. By a wide margin. (Again, Trump anyone?)

We seem to actually believe that America can be made great by avoiding repentance and submission to Christ as Lord in economic, legal, and educational practice.

We like the fake education, fake freedom, fake security, and fake prosperity that it buys…which is why God is about to sweep our pathetic, rebellious, prideful culture from the face of His earth.

May we repent, educate, legislate, and do business accordingly…while there is yet time.