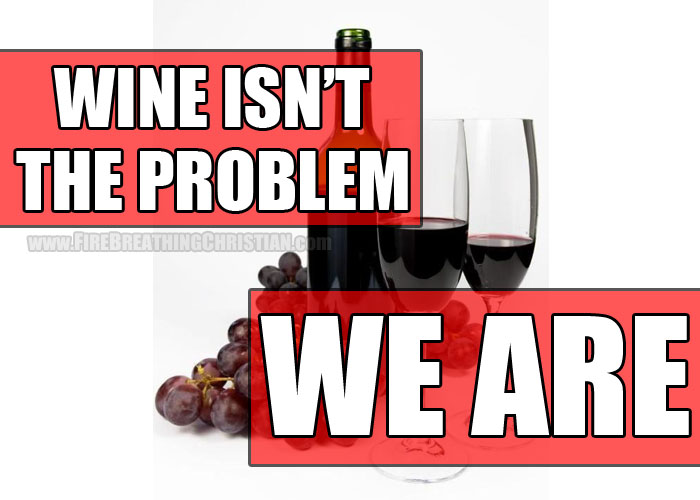 In our home, these are valuable tools that we try to keep on hand. They’re each gifts from God that help me and my family better appreciate both the variety of material blessings that He’s given us, and the necessity of our using those things well.

Let me explain a little:

The idea in our home is to have our little ones learn and come to understand the presence of certain things like beer, wine, guns and video games as normal. Nothing to obsess over. Nothing to worry about.

Like other tools and blessings provided by God, they can be abused and, though their abuse, become quite destructive. Think: fire. Or sexuality. Or cars. Or pretty much anything else.

What we’re trying to show by having these things at least physically present as a regular part of life in our home is that they are both A) something to enjoy in a proper context, and B) nothing to fear in and of themselves.

Of course, the “in a proper context” part is vital. So there’s no obsessing over these things, there’s no making them a center point of our home or family life, and there’s no abusing them through overuse.

We just try to enjoy them in proper moderation from time to time, as schedules and budgets permit.

Right now that makes video games an almost-never-actually-used thing in our home. We just don’t have the time. But even then, we do find value in having video games present downstairs in “the TV room” where we gather for movies or to play games from time to time. The games are just sort of sitting there mostly these days, but even that is a help.

It makes a point, that point being: There’s nothing to be afraid of here.

And the beer in the house.

And the wine in the house.

And the toys, beds, food, and coffee in the house.

The point is that we can have these things in a context that has us as the master. Not the slave.

These things are our tools.

We are not theirs.

And I hope that little Rosie, Wolfgang, and Sebastian do, too.

I say all of that in order to shed a little personal perspective and context on the topic of alcohol use from a biblical worldview perspective.

When this comes up, as it often does, I tend to start the conversation (or my part of it) by referencing Jesus’ first recorded miracle, which was to make high quality wine (not grape juice) at a party that had been going on for a while. (See: John 2.)

Before I go any further, please allow me to lay a few foundational points:

There is no workaround for mastery.

There is no shortcut to maturity.

Running and hiding from hard things may seem like a wise route, and may well at times be a wise approach in the very short term, but it is never the long term path to true maturity, which is another way of saying it is never a viable path to true holiness.

While the modern “alcohol is the devil” line is often presented as a very Christian thing these days, we need to recognize it for what it is: A fundamental confusion as to the nature of God’s creation and a fundamental denial of both our sinful and our personal responsibility for the sinful conduct unleashed through our sinful nature

Put another way, the “alcohol is the devil” vibe is just another way of us blaming challenging and potentially dangerous things in God’s creation for our sinful abuse of those things.

It’s Genesis and Eden all over again (see: Genesis 3). We just love to blame everything and anything but us for our sinful conduct.

Sadly, there are many Christians who are still very much in the mode of railing against alcohol consumption as inherently evil (including many whom I respect and even like quite a lot, like John MacArthur, a famous teetotaler teacher who we’ll examine more in a moment).

To help us dive a little deeper into this, let’s consider some excerpts from an excellent article by Dr. Joel McDurmon on the subject, entitled John MacArthur Drops the Booze Bomb:

“. . . MacArthur unwittingly makes it clear that he is indeed more interested in fallacy than truth when he bemoans, “Cast a disapproving eye at any of those activities [like drinking alcohol] , and you are likely to be swarmed by restless reformers denouncing legalism and wanting to debate whether it’s a ‘sin’ to drink wine or smoke a cigar.” Hold on a minute: is this something to be argued against? Aren’t legalism, sin, and maturing in Christian freedom the issues at the heart of the question after all? But MacArthur sees it necessary to run from such “debate,” and instead use fallacious associations to divert the discussion.

God forbid we discuss “sin.” That might actually lead to people realizing it’s not a “sin” to drink beer after all! “Sin”? Bleh!

Instead, only after loading the unnecessary ideas of drunkenness and debauchery into the image of drinking, does he reintroduce the topic of sin: “no symbol of sin’s bondage is more seductive or more oppressive than booze.” But pay close attention to the bait-and-switch: he refuses to address the scriptural question of mere drinking as “sin”; he will only address the topic after he has hoodwinked his audience by assuming “drinking=drunkenness.” He’s shifting the focus of the debate. It’s like moving the goalposts right when the kicker kicks the ball.

This is the typical teetotaler view: in their little mental world (and believe me, it is little), there is no possibility at all of drinking alcohol with moderation, and certainly not with what Calvin called “moderate liberality.” ((John Calvin, Commentaries on the First Book of Moses Called Genesis, trans. by John King (Grand Rapids, MI: Eerdmans, 1948), 362–3.)) Oh no. There are only two options: abstinence or drunkenness. If you even so much as sip wine, you are at least partially a drunkard, a “boozer,” and you have unleashed the most powerful forces of hell into all of society, your family will come to ruin, this is inevitable, non-negotiable, and the devil from here is unstoppable. Therefore, it is mandatory to abstain.

This is exactly the route MacArthur takes. Thus, he begins his post by speaking of “beer,” but can’t get beyond a few sentences before he switches to the pejorative, “booze”—an old phrase which has specific reference to drunkenness. MacArthur then retains this association the rest of the way through the post. Drinking is no longer considered by itself, but only with associations like “booze,” “controlled substances,” “society’s seamy side,” “ambience of a pool hall,” “casino,” “intoxicants,” “alcoholism,” “drug abuse,” “addiction,” “fleshly desires,” “deadly spiritual dangers,” “damage,” “Bohemianism,” “Sodom,” “flouting taboos,” “fleshly lusts,” “unfettered indulgence,” and “bondage.”

How can we rightly model the pursuit of holiness when we engage in such tactics?

McDurmon continues (with bold emphasis added by me):

“What probably upsets the modern prohibitionists most of all is the fact that YRRs and others who imbibe today are simply ignoring them. That’s right. While of course condemning drunkenness and retaining a sensitivity to recovering alcoholics when necessary, the new generation of less fearful, more mature Christians simply refuses to play that cowering game where we’re supposed to shrivel before the wailing imams of the dry jihad. We’re done with it because it’s unscriptural and humanistic. It’s not just unbiblical, it’s anti-biblical.

The prohibitionists ruled the conservative Christian scene for several decades, but their fallacies have become exposed. They have lost their grip on Christians. They have lost most of their audience, and their message has lost its “umph.” They are trying to give their stump speech without a stump. They have lost moral credibility with an entire generation of Christians who have seen the light of Scriptural truth on this issue and many others.

But MacArthur and I agree on one aspect: the issue is maturity and self-control. He says, “But sober-minded self-control and maturity are virtues commanded and commended by Scripture; these are not man-made rules or legalistic standards.” That’s absolutely right. His problem is that he has the concept turned on its head. The holdovers from the old-line prohibitionists have always mistaken forbiddance for maturity. They have always tried to create the appearance of maturity by imposing extra-biblical standards, and thus creating their own brand of legalism. Scripture doesn’t teach prohibition, so those who do teach it are being legalistic. There is no way around this.

True maturity is just the opposite: it is the ability to use the gifts God has given us and even prescribes in places without abusing them. Anyone who runs from this standard is not interested in maturity at all. They are interested in keeping Christians childish under the guise of safety. Prohibitionists have always forbidden maturity under the guise of purity. It is legalism, and thus, idolatry.”

There is, by the way, a religion out there that does completely forbid all consumption of alcohol. It is not Christianity; it is Islam. When Christians and Christian leaders demand abstinence, they have more in common with Mohammed than with Christ.”

Much to kick around.

Much to act upon.

And much to celebrate…maybe with a fine craft beer or glass of wine…or some cheesecake and Zelda.