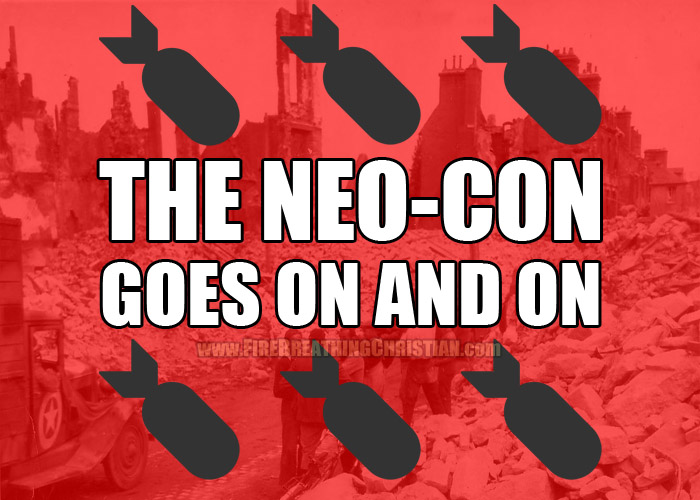 Another week, another war.

With the insanity of North Korea upon us, we are well served to at least pause long enough to notice that no matter the President, no matter the Congress, we are and have been for some time now an Orwellian Super State hell-bent on perpetual war…for the sake of peace, of course. The Pagan Political Right and Pagan Political Left are indeed two wings of the same dragon.

As we noted a few weeks back in Turkey is our friend, Russia is our enemy, and we’ve always been at war with Eastasia:

“In Orwell’s Nineteen Eighty-Four, the author presents us with a dystopic future in which a Western Super-state pursues perpetual war and public manipulation through, among other things, the use of omnipresent government surveillance.

Once something’s successfully wrapped in or identified with the American flag, we’re supposed to assume it is good. To question it’s goodness is problematic. It’s thoughtcrime.”

Then last week we added the following:

“As we roll from last week’s story of the American Surveillance State spying on an American President-elect into this week’s story of the American Military Industrial Complex clawing its way to within talon’s grasp of securing yet another war on the other side of the planet, we are well served to note two primary attributes of the tyrannical nightmare state described in Orwell’s Nineteen Eighty-Four:

1. A comprehensive surveillance system designed to control and suppress the State’s citizens, and…

So please take a moment to stop and think biblically.”

So here we are a week or so later, and we’re already talking about another potentially major war on the verge of being started by the United States Corporate/State military machine.

I mean, didn’t we just finish invading Libya not long ago? After invading Iraq? And Afghanistan?

Yeah, well, that can all only add up to one thing: Bring on North Korea!

To help us get another confirming (yet hopefully unnecessarily so at this point) glimpse into the insanity of it all, The Week‘s Damon Linker penned an interesting little article entitled Why Trump succumbed to the hawks, which included the following tidbits:

“I am sure it’s just a coincidence that The New York Times announced they’d hired Bret Stephens away from The Wall Street Journal in the same week that the Trump administration’s foreign policy underwent a radical reorientation away from an “America First” sensibility and toward the neoconservatism that completely dominates the center-right foreign policy establishment. But that doesn’t make it any less disconcerting.

Stephens is a prominent, Pulitzer-Prize-winning neocon pundit who wrote an entire book, in apparent sincerity, about how Barack Obama — who bombed nine countries in his time as president — was pushing “isolationism” and working to bring about American withdrawal from the world. That the Times is eager to add such a strident hawk to its roster of columnists — joining fellow hawks Thomas Friedman, Nicholas Kristof, and David Brooks — is just one more sign that the much-vaunted demise of neoconservatism over the past 18 months has been greatly exaggerated.

The much more consequential sign is, of course, the dramatic shift underway at the White House.

Once dismissed by Trump as “obsolete,” NATO is now being expanded to include Montenegro. Instead of a would-be ally, Russia is again being treated as a dangerous rival and opponent. Rather than calling China a currency manipulator, now we’re being assured it isn’t — and treating the country as a partner in bringing North Korea to heel (which we’ll apparently do all on our own if China doesn’t play ball). And perhaps most consequential of all, there’s Trump’s remarkable double backflip on Syria — going from denouncing Obama in 2013 for daring to intervene militarily in Syria at all to denouncing him now for not having intervened enough, and launching several dozen cruise missiles of his own to underline the point. . .

. . . However emotionally unstable and ill-informed his interventions were during the campaign for president, it was hugely salutary to have the leading Republican candidate blasting the Iraq War as a horrible mistake. That he triumphed in the primaries despite — or perhaps even because of — taking this stance significantly broadened the foreign policy debate in the Republican Party and pushed the neocons into a deeper defensive crouch than ever before.

Then, after Trump’s implausible win in November, the intensity of neocon opposition during the general election campaign excluded them from top jobs in the incoming administration, which placed an especially high premium on loyalty. For the first time since Reagan’s victory in 1980, it looked possible that neoconservatives would exercise no discernable influence on the formulation of a Republican president’s foreign policy — a fate, in political terms, worse than death.

No one should be surprised — or perhaps even overly disappointed — that it lasted barely 12 weeks.”

This is how things are gonna go for as long as “We the People” believe that we can redefine terms, language, and reality as we see fit. When we effortlessly shift and juggle the meaning of words like “terrorism” and phrases like “act of war” so that they mean one thing for us and another for the rest of the world, we are demonstrating that we are a people gone mad.

When we can openly, flagrantly, and proudly use any means necessary (including armed invasion) for the purpose of “regime change” while whining about how Russia may or may not have tried to “hack” our election, we’re nuts. We’re crazy. Stupid crazy.

When we can drop bombs or shoot missiles into sovereign nations while refusing to treat the action as an act of war, all while yammering on about how if those “evil Russians” dared to meddle in our elections, that would be an act of war, well…again…we’re crazy stupid nuts and kinda pathetic. On second thought, scratch the “kinda”.

In case you haven’t figure it out yet, this never ends.

The State needs to feed. It needs to prop up its false economic and political narratives. It needs to keep us on board ad much as possible, distracted as much as necessary, and in line no matter how on board or distracted we may or may not be.

The American State needs our fear.

In needs our weakness.

It needs to take more and more of our freedom, privacy, and liberty, all “for our own good”, of course.

It cannot deliver true liberty, true freedom, or true peace, which is why we have the perpetual loss of freedom and liberty operating alongside and in conjunction with the perpetual war that we’ve now come to accept as “normal”.

Until we repent, believe, submit to Christ as King in political practice, these chains will not be broken. Darkness and dependence will only grow as the All-American Neo-Con goes on and on…