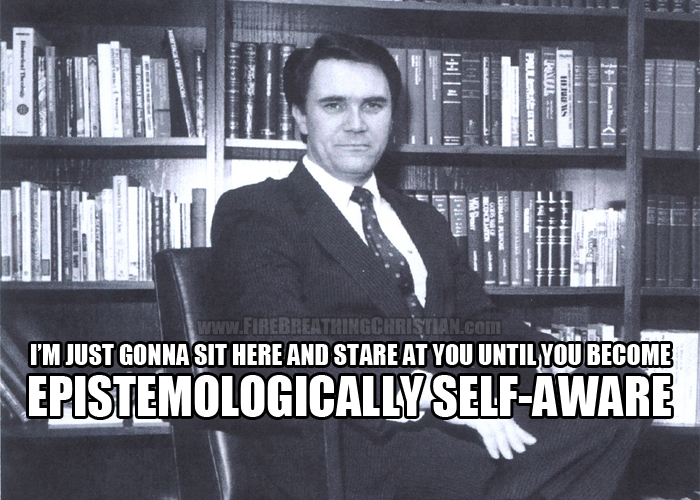 We love to pretend that we can be good without God.

Because pretending to have the ability to be good apart from God helps us to pretend that we can rightly understand and pursue things like law, art, politics, economics, and education apart from God.

Which all helps us to pretend that we are God in practice.

It’s from this presumed God-like position that we conjure up things like neutrality – the notion that one can assess the most basic elements of reality from a purely neutral position.

It’s from this imagined place of neutrality that we then pretend to judge things – all things – by a process of evaluation based on…well…something other than neutrality.

Which is another way of saying non-neutral foundations and standards.

These are our presuppositions.

So it is that the notion of true neutrality existing anywhere in God’s creation is just plain dumb.

Yet it’s all the rage.

Just getting this fact down is what’s known in deep theological terms as “a biggie”.

Anyone with an opinion on anything – including the nature of truth, morality, logic or anything else – must begin to form that opinion by appealing to non-neutral presuppositions. Once we understand this, we have taken an early, critical step toward rightly assessing how all thought and knowledge is to be perceived and pursued as a reflection of God’s Nature in His creation.

It’s all His property. Every bit of it.

Philosophy, logic, mathematics, economics, law, art…everything is His. It is all defined and sustained by Him personally (see: Colossians 1:15-20).

Every political, educational, artistic, and economic thought and action that we pursue is our way of expressing our understanding of who God is personally as that thought or action relates to His creation of politics, education, art, and economics. Man’s contrivance of neutrality is just another lame attempt at working around this fundamental truth.

Once we understand that neutrality is a lie (a lie first promoted by the serpent in Eden – see: Genesis 3), we are in a much better place to understand why confronting the lie of neutrality is a basic (and essential) aspect of the Gospel-fueled Great Commission.

The proclamation of neutrality in law, art, economics, or any other realm of God’s creation is nothing better than an acute expression of what Scripture describes again and again as foolishness – a foolishness that destroys lives, families, cultures, and civilizations when pursued to its logical end.

Along these lines, in an earlier post (Swiss Cheesiness: The Myth of Neutrality), we elaborated on the foolishness of one commonly held “neutral” position of the day – the “there are no absolutes” line:

. . . Our autonomy worshiping pop culture, as an unintended witness to its intellectual vapidity, is routinely about the business of rolling out mind-numbingly stupid proclamations of what it imagines to be profound “truth”.

Remember this: The myth of neutrality is just a tool invented out of necessity for the sake of propping up the tragi-comedic (yet still quite destructive) zombie that is the myth of autonomy. Man loves to prop up one delusion with another. We love to play with law, art, business and the like as though we own or invented the things. But we didn’t.

They’re all defined and sustained by His Nature.

As such, there is no neutrality in any area of life or realm of His creation…and we shouldn’t want it any other way.