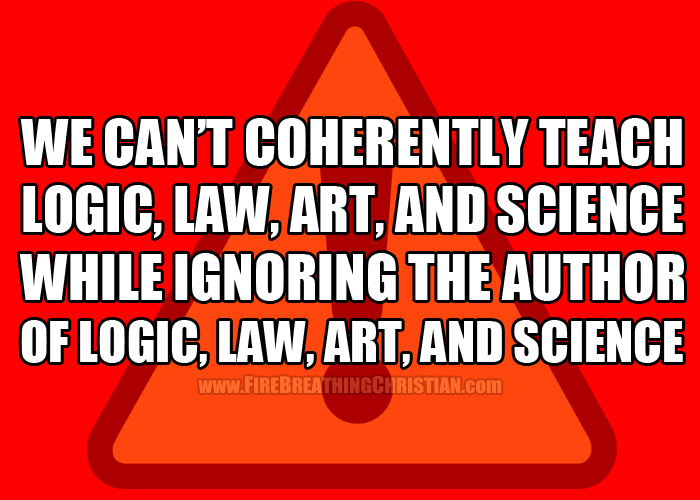 One of the basic lies that we believe – and love – is the notion that we can have Jesus’ stuff without having Jesus.

We actually think we can pursue these things in a legit manner apart from explicit subjugation to Christ. In a very basic (and hopefully obvious) sense, this is rank idolatry – a rank idolatry that defines the philosophy of education employed by American public schools, and has thereby come to dominate the dying culture in which we live.

Through the satanic theory of knowledge promoted in public schools, we are encouraged to do three acutely anti-Christian and (therefore) inherently destructive things:

So it is that idolatry, covetousness, and theft are three pillars of the modern American approach to life, even (and especially) where professing Christians are concerned. Nowhere is this more apparent than in the way we deal with the subject of children’s education.

We actually believe that we can properly and productively pursue knowledge of economics apart from explicit connection with and subjugation to God.

Why do we believe that we can pursue knowledge of these things that God owns, defines, and sustains personally apart from embracing and submitting to God personally?

Because we’ve been discipled to think that way.

By the State. (See also: Temples of the State: The VERY Religious Mission of American Public Schools.)

We’ve been taught to pursue knowledge apart from God. Just like in Eden.

We’ve been encouraged to build idols.

We’ve been conditioned to covet.

We’ve been programmed to steal.

It’s a satanic one.

And that satanic value is the foundation of public schools in America.

May we repent and reform our approach to education accordingly…while there is yet time.

[Reminder: I will be kicking off the third annual Great Education Forum this Saturday (April 29) with a presentation on the satanic foundation of public schools. The event will be hosted at the New Geneva Christian Academy in Appomattox, VA, and will kick off at 1 p.m. (Eastern Time). Admission is free.]