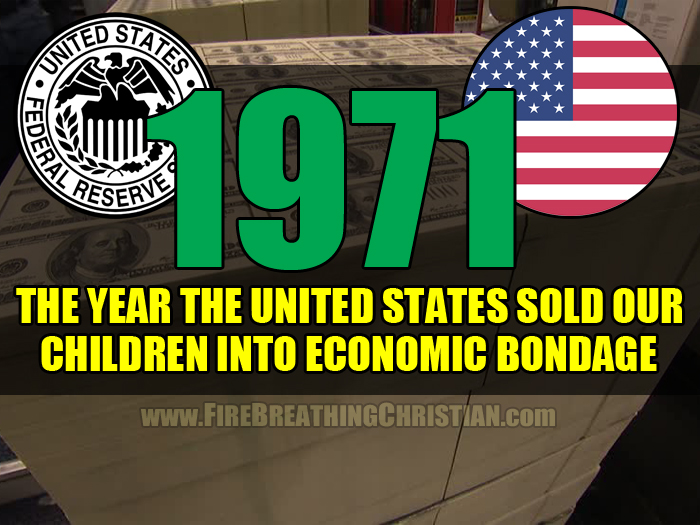 What if a group of people conspired to sell your child into slavery?

What if they conspired to sell you, me, our children, and our grandchildren into slavery?

How would feel about the symbol of that organization?

More importantly, what would you think of that organization and its identifying symbols?

With all the “respect the flag” talk fluttering in the breeze these days, it seems like a good time to remember and reflect upon some of the major culture-shaping programs advanced over the last 50 years or so under cover of the United States flag.

With the national debt recently passing the twenty trillion dollar mark (that’s $20,000,000,000,000.00!) and with the U.S. Congress openly flirting with the notion of formally ditching the now farcical “debt ceiling” concept altogether, it would seem that the United States’ approach to economics would be one of a few key areas by which we as Americans can and should test to determine whether the U.S. flag we are told to adore without question is, in fact, a symbol of true freedom, true liberty, true privacy, and true justice, or whether it is…something else…

Maybe even something unworthy of blind devotion.

In this context, please consider the year 1971. More specifically, please be encouraged to note the significance of what the United States decided to do to its young and future generations when it fully embraced a debt-based fiat economic construct designed to enslave, as it did when President Richard Nixon (a so-called “conservative Republican”) decided to completely detach the U.S. Dollar from gold as an objective standard by which its printing (and subsequent use in funding Marxist/Statist causes) might be limited.

In order to better understand the systematic betrayal of the young undertaken by the United States (under the cover of the U.S. flag, of course), I’d like to share an excellent article by 720 Global’s Michael Lebowitz as recently posted at ZeroHedge (in a piece titled The Illusion of Prosperity). Please do read through the whole thing and make use of the charts. There’s a lot of great (and painfully revealing) info here:

“For the last 50 years, the consumer, that means you and me, have been the most powerful force driving the U.S. economy. Household spending now accounts for almost 70% of economic growth, about 10% more than it did in 1971. Household spending in the U.S. is also approximately 10-15% higher than most other developed nations.

Currently, U.S. economic growth is anemic and still suffering from the after-shocks of the financial crisis. Importantly, much of that weakness is the result of growing stress on consumers.

Using the compelling graph below and the data behind it, we can illustrate why the U.S. economy and consumers are struggling. The blue line on the graph above marks the difference between median disposable income (income less taxes) and the median cost of living.  A positive number indicates people at the median made more than their costs of living. In other words, their income exceeds the costs of things like food, housing, and insurance and they have money left over to spend or save. This is often referred to as “having disposable income.”  If the number in the above calculation is negative, income is not enough to cover essential expenses.

From at least 1959 to 1971, the blue line above was positive and trending higher. The consumer was in great shape. In 1971 the trend reversed in part due to President Nixon’s actions to remove the U.S. dollar from the gold standard. Unbeknownst to many at the time, that decision allowed the U.S. government to run consistent trade and fiscal deficits while its citizens were able to take on more debt. Other than rampant inflation, there were no immediate consequences. In 1971, following this historic action, the blue line began to trend lower.

By 1990, the median U.S. citizen had less disposable income than the median cost of living; i.e., the blue line turned negative. This trend lower has continued ever since. The 2008 financial crisis proved to be a tipping point where the burden of debt was too much for many consumers to handle. Since 2008 the negative trend in the blue line has further steepened.

To help answer that question, we added the green line to the chart. This line adds consumer credit and transfer payments to the blue line. Consumer credit encompasses credit cards, lines of credit, auto loans, student loans, and other non-mortgage forms of consumer debt. Transfer payments are benefits the government bestows upon its citizens in which no goods or services are received in return. Examples include: welfare, food stamps, insurance, and medical benefits. It is important to note that, given the continual deficits run by the U.S. government, these benefits are predominately paid for with borrowed funds.

Note that the green line, unlike the blue line, remains positive and relatively stable from 1959 to 2008, 20 years longer than the blue line. The take away is that consumer and government debt filled the diverging gap between incomes and the cost of living.

The divergence between the lines halted in 2008. The financial crisis was in part the result of a consumer that had exhausted their ability to use more debt to maintain their lifestyle. Despite the lowest interest rates on record and increases in government transfer payments, the green line has not been able to recover.

To impress upon you the importance of understanding the role debt has played in supporting our lifestyles, the graph below highlights the magnitude and composition of consumer credit and government transfer payments as a percentage of consumer spending. Combined they now account for 43% of all consumer spending, which in turn accounts for nearly 70% of economic growth. In other words, almost a third of economic growth is reliant on increasing debt. These charts clearly illustrate that the U.S. consumer has steadily relied on increasing amounts of debt to maintain an artificial standard of living. Through the use of credit, personal and government, U.S. households have pulled forward future consumption. The weight of those outstanding obligations serves as a wet blanket on current and future economic growth.

The financial crisis in 2008 fractured the economy in ways that are clearly evident today. Addressing the troubling debt burden has been postponed through extraordinary stimulus, but the problem has only grown in size. This proves that a debt problem cannot be solved by using more debt.“

Remember: None of what you’ve just read or examined in chart form would be possible apart from the United States embrace and promotion of fiat economics. (See: Fiat $lavery: We have been bought and paid for…with nothing.)

Now, with this info noted and with all the current chatter about “respecting the flag” in mind, I need your help in recalling something important:

Which flag flies over the Federal Reserve?

Which flag spawned and props up the debt-based fiat economic construct that is even now fulfilling its purpose of enslaving you, me, our children, and our grandchildren to the American Corporate-State?

Which flag is it again?

So how do you feel about that?!

More importantly, what do you think?

Most importantly, what are you gonna do about it?