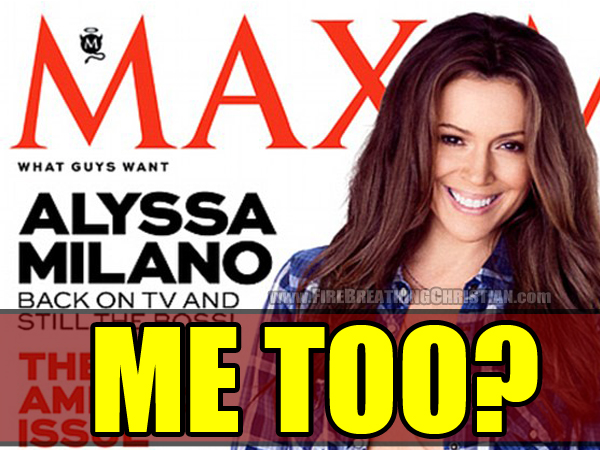 Like a once nimble, happy gazelle suddenly finding itself trapped and suffocating under the gut of a giant toppled zombie elephant, Hollyweird is desperately clinging to life as it lies crushed under the weight of Harvey Weinstein.

Painful, tragic, and ugly, to be sure, but good nonetheless.

In these early stages of what will no doubt be a long, trainwreck-in-slow-motion kind of production, one of the most prevalent attributes on display is hypocrisy.

The statements of “shock”, “horror” and “outrage” now pouring forth relentlessly from the pampered pie-holes of those most responsible for promoting a culture of rank materialism, prolific promiscuity, and woman-hating self-centeredness is almost too much to bear.

But for all the ugliness and brutality of the long present (and building) truths now finally confronting us, there’s great value to be had in not only acknowledging what’s going on here on a surface level, but way down deep at the roots…even when those root causes lead us back to ourselves, as opposed to pointing comfortably toward all of those “evil liberals” and “Hollywood types” that we enjoy beating up on and blaming for the looming death of Western Civilization.

With that in mind, let’s consider one of the latest breaking waves to roll over the culture as a result of Harvey Weinstein’s storm finally coming to shore after building at sea for a few decades.

Earlier this week, actress Alyssa Milano launched what has since gone on to become the viral MeToo hashtag when she tweeted, “If you’ve been sexually harassed or assaulted write ‘me too’ as a reply to this tweet.”

Before going on, let me be plain about three things:

1. I’m very glad to see this social media awareness campaign happening. For many reasons (some of which we will explore here, and more we may get into later as The Great Hollyweird Weinstein Apocalypse unfolds).

2. The harassment and abuse that’s been occurring regularly and pervasively as a basic “that’s just how it is” part of American life for generations now is disgusting, unconscionable, and incredibly destructive. The very real abuses suffered by the likes of Ms. Milano and millions of far less famous boys, girls, men, and women is something that we need to tackle head-on in a spirit of seriousness, personal humility, and a desire for repentance.

3. While the behavior being protested is repugnant, we need to realize that it is the natural and entirely predictable result of our increasingly progressive/feminist culture’s approach to truth, virtue, sexuality, family, marriage, and pretty much everything else. As a result of our having been immersed in the increasingly progressive/feminist culture now imploding around us, we also need to realize that most of us who are being encouraged to slap a “#MeToo” or some similar badge of victimhood onto our Facebook pages or Twitter feeds have also played a role in creating and enabling the culture of sexual deviance and abuse that is now the norm in America.

So when we notice some of the fragrant hypocrisies of Alyssa Milano and others now attempting to claim some sort of moral high ground after spending their lives waging war on the old moral high ground, we shouldn’t get uppity or self-righteous about it. If we are Americans, there’s a 99.999997% chance that we’ve been programmed in a manner disturbingly similar to that which seems to define the typical Hollyweird worldview, so even though we should be firm, speak clearly, and take hard (and often unpopular) stands, we need to guard against saying those hard things or taking those hard stands in a self-righteous or hypocritical manner.

In this context, I wanted to share some thoughts that came to mind when I first heard of Ms. Milano’s PR push (and by calling it a PR push, I’m not trying to label it as insincere, illegitimate, or any other inherently bad thing).

Having not followed much of anything Alyssa Milano related since watching her in the corny network sitcom Who’s the Boss back in the day, I only have one memory of her since my childhood in the ’80s. That memory was formed during a trip I took to grab a midnight snack at a convenience store in downtown Seattle while I was working at Amazon.com.

It was during a typical run with a couple of friends to Ralph’s, a cool downtown mini-grocery that was open late, that I noticed Ms. Milano smiling from the front row of the magazine section, where she was on the cover of a Maxim magazine. She was wearing very little and seemed to be quite happy to offer herself up as yet another in a looooooong line of scantily clad skanky types, which struck me as noteworthy and sad at the time since I’d only remembered her as the “sweet, innocent” daughter of Tony Danza’s character on Who’s the Boss?

I’ve never been a Maxim “reader”, even back in my less enlightened days, but that cover made an impact.

So when I heard about Ms. Milano’s new #MeToo campaign, that cover was the first thing that popped into my head.

After looking into her career just a tad one can easily confirm that Milano has regularly contributed to and profited greatly (materially, at least) from helping escort the culture into the very hell that she’s now protesting.

Does that make her a legitimate target of crude conduct of any kind?

Does the fact that a girl or woman might dress or act like a skank justify any act of harassment or violence against her?

And, at the same time, does the “confidently promiscuous”, “sexually liberated”, progressive feminist mindset on display (via Maxim covers or elsewhere) contribute mightily to the creation and enabling of serial sexual predators like Harvey Weinstein and Bill Clinton?

At least now we’re being forced to recognize some of the obvious truths that’ve been staring us in the face for the better part of a century while we ignored them and pretended. We’re at least beginning to acknowledge, if not connect, the obvious dots in plain sight all around.

So when will the #MeToo tag be used to move past easy targets of convenience like Harvey Weinstein?

When will the Bill Clintons of the world finally be confronted, rather than enabled, adored, funded, and voted for by much of the #MeToo crowd?

The answer to that one is as clear as it is pathetic:

The virtue signaling feminist/progressive #MeToo types now going public with their loathing of Harvey Weinstein are not taking the same approach to Bill Clinton because he (and his machine) is still able to give them what they want. He and his ilk can still buy their affections and their silence by using power to preserve their access to the very vices that have made them the self-absorbed, culture-wrecking, skank-like creatures that they are now.

Harvey’s problem is that he no longer has power.

Bubba Clinton and his Enabler-in-Chief wife, Hillary, do have power. And lots of it.

They have the power to push “abortion rights”.

They have the power to push “gay marriage”.

They have the power to advance the feminist/progressive agenda in ways that few others can.

So they get a pass.

They can literally rape and pillage at will without any fear of a #MeToo tag being aimed their way…for now, anyway.