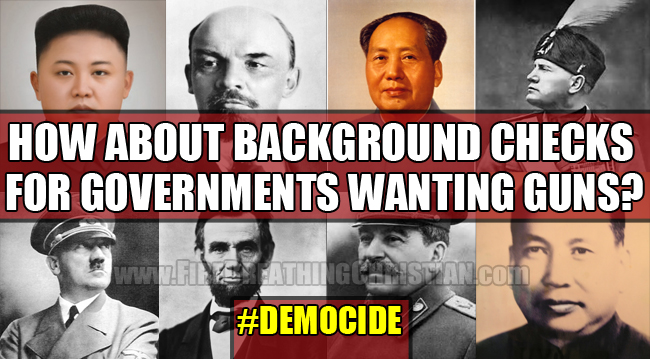 Ever stopped to notice that most gun grabbers like to grab a lot more than guns?

Like private property rights, privacy rights, free speech liberties, and vulnerable women, to name a few in no particular order.

It’s as though the more power some people are given (particularly people operating in the highest levels of the political realm), the more they are inclined to use it to dominate, intimidate, and control others.

Not if you understand human nature at all. But these days, largely thanks to things like State-run children’s “education” and State-licensed “preachers” who support things like State-run “education”, most Americans don’t know even the most basic, fundamental truths about most things. They know what the State wants them to know, and that’s about it.

This is why some of the most obvious rhetorical questions just begging to be asked in a mature, thinking society are rarely, if ever, noticed, much less openly entertained here in the State-programmed “land of the free” and home of the NSA.

But that isn’t gonna stop us here at FBC, now is it?

Ever stopped to notice that the same collectivist, State-empowering ideologies being pimped and promoted by various State-worshipping zealots from across the political spectrum always – and I mean always – once secure atop the power pyramid in any given culture, then use that secured position as a base from which to rape, pillage, plunder, and even murder at will?

To the tune of hundreds of millions dead in just the past 150 years or so.

For more how governments are the organizations most in need of review where things like “gun control” are concerned, check out the following clip:

If the above embedded player doesn’t work, you can access the clip by clicking here.

This is something to be thinking about as we ride the current God-given wave of revelation where the nature of leadership atop America’s State and Corporate empire is concerned.

With every confirmed instance of groping and abusing by Al Franken, John Conyers, Bill Clinton, George H.W. Bush, and the like, we need to remember these people – these flagrant abusers of power – these people are the ones into whose hands “gun control” advocates want to consolidate guns.

As we described earlier in What Gun Control Really Means:

Gun control is the consolidation of dangerous weapons in the hands of the most dangerous organization in all of human history: Government.

Please vote (and arm yourselves) accordingly.”

In this context, what people group or organization is more deserving of being stripped of guns than the governments that have, time and time and time again, demonstrated their willingness to literally murder by the thousands (or millions or tens of millions) in order to prop themselves up or expand their power?

What people group or institution is in greater need of a serious, thoughtful background check before they are allowed to use guns, much less have a monopoly on them?

Giving government – the biggest business of all businesses and the biggest monopoly of all monopolies – a monopoly on dangerous weapons is both intensely and suicidally stupid…as all of recorded history makes plain (for those who care to notice).