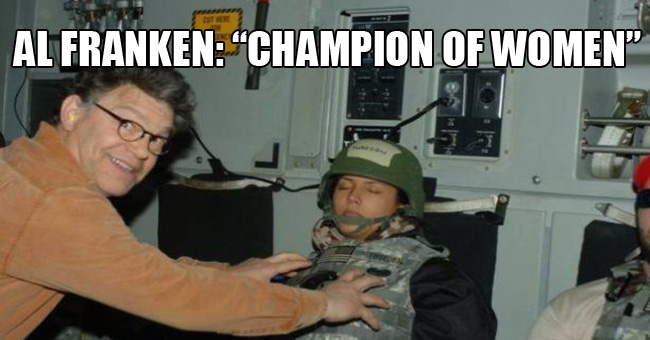 Ah, how quickly the world changes…and yes, often for the better…

Just yesterday, it seems – or about two months ago, to be more precise – it was the open, accepted norm for progressive feminist types like Bill Clinton, Al Franken, and _______ Kennedy to have free reign to grope, fondle, and even rape women of their choosing so long as they consistently defended the “right” of said women to murder their baby boys and girls for any reason or no reason at all.

That was the magical formula.

It was super simple.

And we all knew it.

Take a top tier role in the ranks of feminist progressives defending the “rights” of women to murder their children, and you were pretty much free to assault, abuse, rape, and pillage as you saw fit.

Here’s the opening snippet from a CBS article covering his announcement:

MINNEAPOLIS (WCCO/AP) — Following weeks of accusations made against him, Sen. Al Franken has announced he is stepping down at the end of the year.

“I am proud that during my time the Senate I have used my power to be a champion of women and that I have earned a reputation as someone who respects the women I work alongside every day. I know there’s been a very different picture of me painted over the last few weeks, but I know who I really am,” Franken said on the U.S. Senate floor Thursday morning.

“Serving in the United States Senate has been a great honor of my life. I know in my heart that nothing I have done as a Senator, nothing, has brought this honor on this institution and I am confident that the ethics committee would agree. Nevertheless today I am announcing that in the coming weeks I will be resigning as a member of the United States Senate,” Franken added. “Even today, on the worst political day of my life, I feel like it’s all been worth it.”

He’s a “champion of women”.

We regularly hear the same thing from pretty much every serial sexual predator type roaming the corridors of power in DC (on both sides of the aisle).

Repentance isn’t really a thing with these people.

Denial sure is, though.

And at a certain level, this is totally understandable.

Think about it again: Only two months ago the Clinton/Franken/Kennedy model of progressive feminism was the gold standard in the political realm. It was the norm – the totally open and accepted norm in both political parties.

And now that norm is exploding in flames before our very eyes.

In this context it’s not hard to understand some of these progressive feminists’ anger and frustration.

Their license to fondle, assault, and even occasionally rape has been rescinded…or is at least in the process of being rescinded.

Their re-definitions of “respect”, “honor”, “champion” and “love” are being exposed.

Their whole world is being turned upside down.

Which is another way of saying that the upside down values they’ve pimped, promoted, and used as cover for many decades is now being turned right side up…or at least heading in that direction.