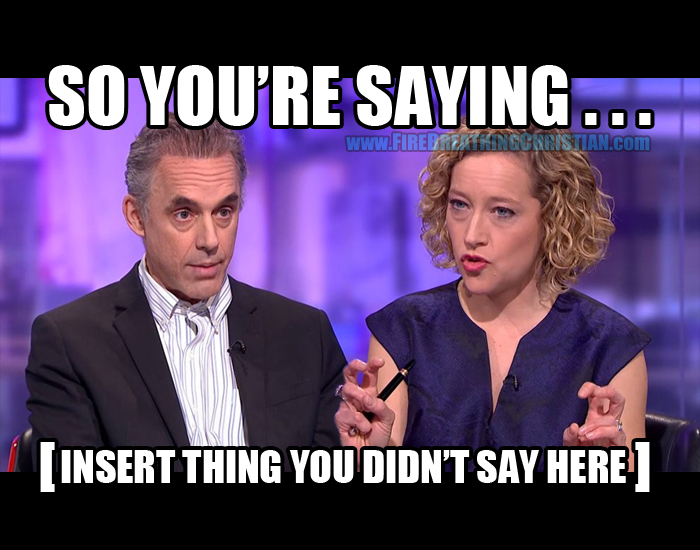 For those who don’t know of or follow Jordan B. Peterson, you should start paying attention.

Not because Dr. Peterson has a Christian worldview. He doesn’t. (So please pray for him on that count.)

We should be paying attention to him because he’s moving – or at least forcefully nudging – culture in a very positive direction in a few specific and important areas. He’s derailing long-running fictions and redirecting the narrative of the day in ways that seemed near impossible (at least in the short term) just a short while back.

In this (as is the case for all people in all places at all times), Dr. Peterson has been God’s tool. While there’s much for us to be thankful for in God’s provision and use of Peterson in this way, we have to be on guard for the many errors and problems that come hand-in-glove with his fundamentally non-Christian (which is another way of saying anti-Christian) worldview.

Though Dr. Peterson was already “a thing” long before last month’s fateful and now legendary interview with Cathy Newman of British television’s Channel 4 News, that interview served to propel his already stratospheric popularity to a whole ‘nother level. The interview – I mean The Interview – was almost instantly recognized as an event or moment of great significance and has inspired boatloads of intriguing articles, interviews, and observations in its aftermath.

One of my favorites is Gary North’s Bambi vs. Godzilla: Cathy Newman vs. Jordan Peterson, which provided the following enjoyably edgy take:

“In order to understand the title of this article, you need to watch a video. I regard this video as the finest low-budget cartoon ever produced. It is titled “Bambi Meets Godzilla.” It was made in 1969. This will take you only 90 seconds.

On very rare occasions, a public event takes place that represents a turning point. It is not that the public event causes the great turn; rather, it illustrates it or represents it. Such an event took place in December 1998, when Matt Drudge published his brief article on the decision of Newsweek to suppress the story of Bill Clinton and an unnamed intern. That was a visible turning point of the shift of influence away from physically published journalism to digitally published journalism. It was also symbolic of the beginning of the end of the gatekeepers’ control over the flow of information.

Such an event may have taken place last month. Anyway, I hope so.

BAMBI GOES ON THE ATTACK

On January 16, Cathy Newman conducted an interview with clinical psychologist Jordan Peterson. Ms. Newman played the role of Bambi. Ms. Newman is a British TV personality on the Channel 4 News.

Either she or her producer decided to interview Dr. Peterson. He was in Great Britain to promote his new book. Dr. Peterson is a professor of clinical psychology at the University of Toronto. He has an enormous following on YouTube. Every time he posts one of his lectures, it gets at least 200,000 hits. He raises so much money through voluntary donations to support his video productions that he has a team of videographers who record all of his lectures. I have never heard of anything like this in educational history.

She is a graduate of Oxford University. She is intelligent. But, like most liberal feminists in the media, she has had a free pass throughout her career. She has conducted lots of interviews. She has learned how to be aggressive. But, intellectually speaking, and especially conceptually speaking, she is Bambi in the woods. She or her producer made the mistake of inviting Godzilla for an interview.”

For those who’ve not yet seen the Bambi v. Godzilla interview, here it is (and yeah, you really should watch all of it):

There’s so much to learn here.

And yeah, the nuggets of wisdom that are to be gleaned – and there are many – have been planted in the mind of an unbeliever…an unbeliever that God has chosen to use in this way.

Bask in the glow of it.

1. Test everything that he says in light of Scripture.

2. Pray for his salvation.