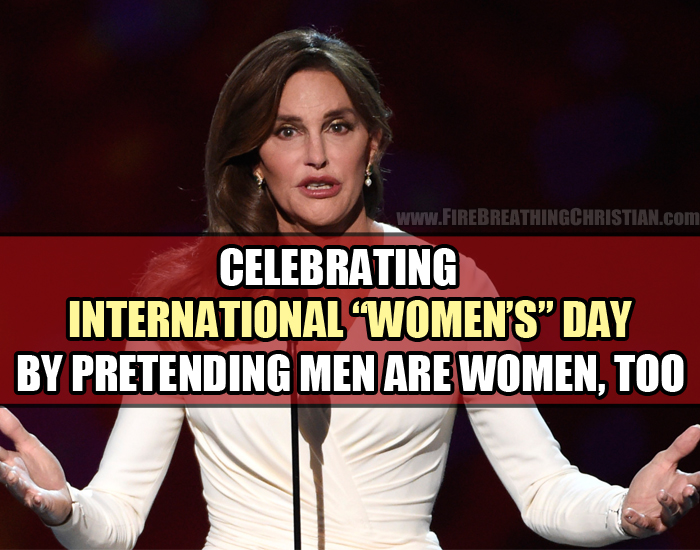 What does “International Women’s Day” even mean in a world where men are women too?

Besides the obvious fact that I’m a woman-hating, transphobic bigot for even asking the question.

If being a woman is simply a matter of momentary identification, then what’s the big deal? Where’s the value? Where’s the meaning? What exactly is left to celebrate? Or defend?

And if that momentary identification can (and often does) change from year to year, month to month, or moment to moment, then what does the “woman” category even mean, if anything, in an objective sense? It sure seems like it doesn’t mean anything substantive at all anymore…which, when you stop to notice, is the whole point.

The point of Cultural Marxism, secular Progressivism, Feminism, and other strains of the satanic virus that’s permeated and reshaped our culture, is that meaning itself is to be undone.

Marriage, family, gender, and sex are not merely to be redefined. They’re to be undefined. Relentless redefinition is merely the means by which undefinition is to be accomplished.

In order to fulfill the Progressive mandate against discriminating against anyone who wants to be “married” (as they define it), marriage itself must inevitably be opened up to any and all individuals and groups, including the largest of groups who want to go the polygamy route. There’s no way around it. Any barrier placed before anyone or any group can and will be described as bigoted, intolerant, and, therefore indefensible. Through this approach, the goal is to utterly destroy marriage as a concept; the mission it to make strip the term of all substantive meaning.

The same goes for family.

It’s all being redefined on a weekly (or daily or hourly) basis as the means by which it will ultimately be undefined into oblivion.

And that’s why here in 2018 America “International Women’s Day” has become something of a comical tragedy…or is that tragic comedy? I guess it could go either way.