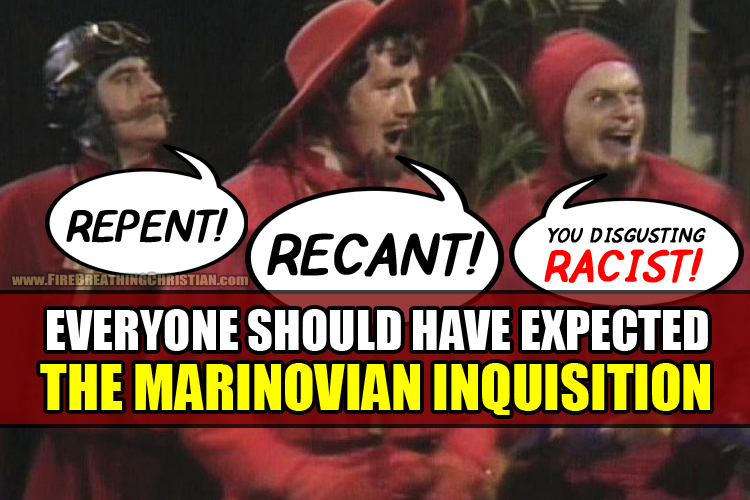 You’re either with ’em or you’re against ’em.

You either obey the authoritative edicts of their Great Leaders or you will suffer their wrath.

You either submit to their hierarchal pyramid of sin seriousness or you will be harassed, impugned, and shouted down to the best of their ability (which, thankfully, is a level of ability that’s been decreasing by the day for a while now).

You either disassociate from those they deem heretics or they will unleash their dogs of Inquisition upon your noncompliant little self, with said dogs drenched in all manner of SJW/Cultural Marxist tools and trinkets, including, of course, The Race Card, deployed hand in glove with its familiar escorts:  Comical/nauseating virtue-signaling and emotion-drenched monologue punctuation marks aimed at painting anyone who dares disagree as heartless, cruel, and, of course, probably (if not certainly) a racist.

Their mission to purity the church on their terms as dictated by their leaders and advanced by their Ministerial Industrial Complex (MIC) seems to know no bounds, at least none that keep it from sinking deeper and deeper into synchronicity with the SJW/Cultural Marxist vibe that’s already overtaken so much of the culture.

For all it’s big talk against overpowered church leaders (and organizations), biblical church structures, and biblical church discipline, the Marinovian Industrial Complex is utterly dominated by overpowered leaders hell-bent on purging dissent by way of their own approach to bringing discipline to the unrepentant. Their program tends to revolve around a combination of very selectively applied “standards” conveniently advocated or ignored depending on the needs of whatever Great Leader-driven narrative is the Marinovian Industrial Complex’s flavor of the moment. These “standards” are then used as the means by which Marinovian targets are proclaimed apostate, heretical, and worthy of practical, and sometimes literal, excommunication (again: all while railing against biblical church discipline practiced by local church bodies organized in a biblically prescribed manner).

On the one hand, the Marinovian Industrial Complex is all about pitching a “priesthood of believers” that often approaches biblically defined church leadership roles (Acts 14:23; Titus 1:5-9), qualifications for leadership (Titus 1:6-9; 1 Timothy 3:1-7; 2 Timothy 2:24), church structure (Titus 1:5; Hebrews 13:17), and church discipline (Matthew 18:15-17; 1 Timothy 5:19-21; Titus 3:10) as though they are obstacles to be overcome (often through radical redefinition). On the other hand, the very same Marinovian Industrial Complex advances its agenda, as we’ve already noted, through organizations guiding foot soldiers charged with carrying forth the proclamations of their Great Leaders and seeking to discipline those who don’t repent, believe, and get with the Marinovian program.

So yeah, it’s a flagrantly self-contradicting, hypocritical mess of selectively applied “standards”, truths, and principles. It’s like a potpourri of popery and a Complex of complexes all rolled up into one glorious, white-hot ball of inquisitorial fury, and, at the moment, that little ball of rage is doing its best to turn or burn as many heretics and heretic associates as possible.

The latest target of the Marinovian Industrial Complex is the Mid-Atlantic Reformation Society (MARS), a group of Christians based in Pennsylvania who’ve committed the egregious sin of not submitting to the Marinovians while securing speakers for their upcoming Future of Christendom Conference. (Which I am now hoping to attend, schedule and budget permitting.)

The Marinovians’ concern with the conference centers on its inclusion of Dr. Peter Hammond as a speaker. They contend that Dr. Hammond should not only be disqualified from presenting at the conference, but that he should be shunned by all Christians and practically excommunicated over his personal views on inter-“racial” marriage – a term that grates on me since, from what I can tell, Scripture proclaims all people to be part of one human race, the only ultimately consequential division or sub-categorization of which would be into believers (covenant keepers) and unbelievers (covenant breakers).

There is much that can, should, and will (including here at FBC in the future) be said on the subjects of both A) inter-“racial” marriage, and B) the ramifications of one holding to a particular view on inter-“racial” marriage, particularly a view that in any way frowns upon or regards inter-“racial” marriage as sub-optimal. While I will not be diving deeply into that important subject in this post, and I am clearly at odds with Dr. Hammond’s view on this particular (and very significant, though non-essential) issue, I view Dr. Hammond as not only a dear Brother in Christ and a valued friend, bit also as a remarkable example and inspiration. His lifelong commitment to serving others, particularly Africans, at great personal cost, including literal beatings and imprisonment for the sake of the Gospel, is one of the greatest examples of a man “sold out” to Christ that I have been blessed to know personally.

Yes, even though he has what I believe is a very flawed and very problematic view on inter-“racial” marriage.

Before moving on, I’d like to share a link to Dr. Peter Hammond’s response to Dr. Joel McDurmon’s hit piece as posted at American Vision. I strongly encourage those who are interested in this matter to read Dr. Hammond’s response, which is accessible by clicking here.

The Marinovian Inquisition’s targeting of Dr. Hammond has opened a lot of eyes. For all of the ugliness associated with this situation, we’re well served to remember that this too is being used purposefully by God to hone His people and that even in this circumstance we are being blessed with many opportunities for learning, growth, and improvement. In that context, one of the benefits that seems to be becoming more and more apparent in recent weeks is that the danger, destructiveness, and glaring inconsistency of the Marinovian Industrial Complex is becoming more and more clear to more and more people.

This is a good thing.

There are important lessons to learn here. We ignore or turn away from them at our own peril. Cowardice and fragility disguised as piety and virtue are no help here. We have to shake off the hypersensitive Snowflakey spirit of this SJW age and be adults who can handle some combat if we’re actually going to win the battles we’ve been called and equipped to engage.

So let’s not run away and hide.

Let’s pay attention and fight back properly, lest Inquisitions like the Marinovians’ be unnecessarily allowed to roll on unobstructed.

If unearned moral superiority is the coin of the SJW realm (and it is), then the Marinovians’ regular use of that particular fiat currency should tell us a lot.

If undermining the foundational structures and order of Christian culture is the openly stated objective of Cultural Marxism (and it is), then the Marinovian Industrial Complex’s increasing embrace of Leftist approaches to change the culture should be viewed as dangerous…and probably not coincidental.

If Marinovian zealots are now down to citing the Southern Poverty Law Center as backup, well…are these dots really all that hard to connect?

The obvious answer is: No, they are not.

So let’s connect the dots like adults and pay attention to the details, no matter how painful those details may be.

Let’s define character, church, discipline, structure, and the essentials of the Gospel biblically… regardless of how that might offend the SJW sensibilities and dictatorial inclinations of the Marinovian Industrial Complex.