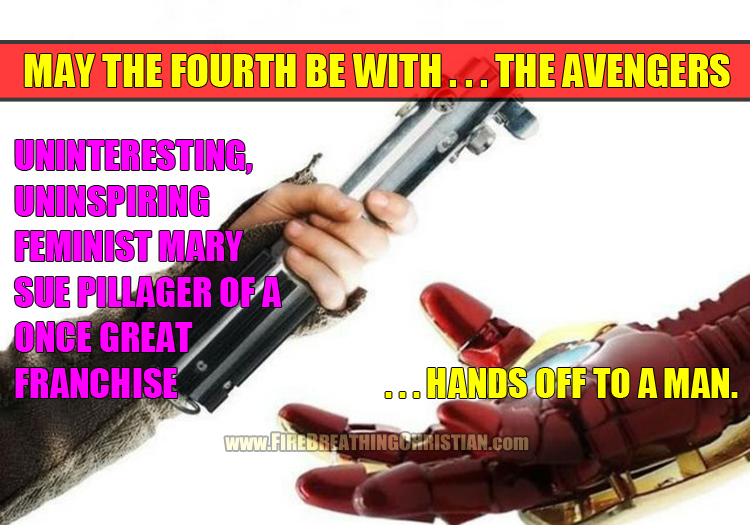 Ever since George Lucas handed Star Wars over to Darth Disney’s ridiculously feminist Sithette Kathleen Kennedy, May the fourth ain’t been what it used to be.

Disney’s SJW pornification of the once wondrous Star Wars franchise has been painful to experience, with one train-wreck of a film following the next as the beauty, charm and inspiration of Lucas’ creation continues its forced transitioning into a laughably unbelievable feminist fantasy realm where mocking and replacing the very things that made Star Wars great is the norm. (For more on this, please check out Star Wars Episode VII: The Force Rolls Over In Bed…and what Christians oughta do about it.)

And if you don’t like the new SJW Star Wars product, you’re obviously a sexist, racist, right-wing Neanderthal.

If you dare notice the significant financial underperformance of last year’s Star Wars Episode VIII: The Least Jedi, you are just a fanboy sexist, racist, right-wing Neanderthal who doesn’t understand how these Big Franchise things work. You see, The Least Jedi radically underperformed Episode VII: The Farce Awakens for many good and legit reasons that have nothing to do with the terrible story telling, terrible characters, nonexistent character development, and Frankenstein’s-monster-style stitched together trilogy arc, to say nothing of the comically awful SJW characters and concepts that dominate the new face of the dying franchise. Oh no, the well documented financial underperformance of recent Star Wars flicks under Darth Disney has nothing to do with those things.

Instead, we are told, things like “franchise fatigue” are taking their natural toll, what with Disney releasing a whopping one Star Wars film per year, ’cause, you know, there’s no level of quality that could possibly sustain mega-blockbuster, record setting ticket sales  when you have that many flicks – one per year – being cranked out year after year for, like, three years in a row.

One film per year over three years’ time, as the “franchise fatigue” Star Wars defense theory goes, is just way too much to expect mega hits like The Farce Awakens to repeat themselves.

This has been one of the major lines tossed out there by SJW Star Wars defenders for a while now, and on this May the 4th, Iron Man pretty much called that idiotic defense out and crushed it like a grape.

Well, Iron Man and the Avengers, to be fair.

As of today, May 4, 2018, Avengers: Infinity War is about to become the fastest flick to make $1 billion.

The billion dollar threshold will have taken the Avengers eleven days to cross.

The Farce Awakens took twelve, and that was after the looooong franchise hiatus and massive built up appetite for a new Star Wars flick.

So what about that “franchise fatigue” deal, huh Darthette Kennedy?

Hasn’t Marvel been cranking out MCU movies at a rate of 2+ per year for about a decade now?

That’s (at least) twice the rate of releases over more than twice the amount of time that Disney’s been pillaging the once great Star Wars brand, so what gives?

Why can Marvel crank out so many more movies each year for a decade and then cap things off with a flick that breaks the records set by The Farce Awakens?

What does this tell us about “franchise fatigue”?

What does this tell us about the performance of The Least Jedi?

What does this tell us about characters?

The treatment of icons?

A lot, it seems, though it’s likely that the SJW crew squeezing the last nuggets out of the golden goose of Star Wars will choose to miss and/or reinterpret each of these points.

Even so, congrats to the Avengers for both breaking records and helping to expose the farce that is Disney’s SJW-pillaged Star Wars.