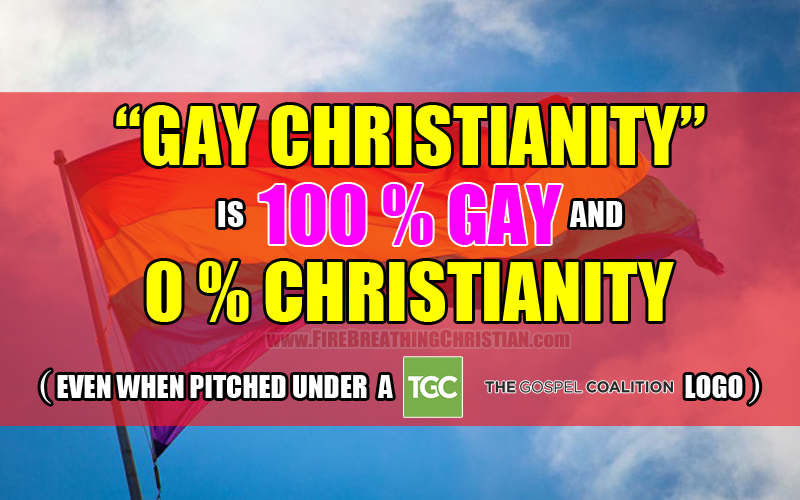 Of all the flagrantly anti-Christ concepts pitched by “The Gospel Coalition” these days, one of most heinous is that of “gay Christian” as a legitimate category or condition that should be embraced by both the church and the individual afflicted with what Scripture clearly defines as an inherently dishonorable desire.

While there are many approaches being undertaken by various anti-Christian groups to promote the legitimacy of homosexual attraction and lifestyles within the church, The Gospel Coalition’s preferred strategy for promoting “gay Christianity” centers, for the moment, on celibacy. In classic whitewashed tomb form, the basic idea is this: As long as you don’t act out on your gay desires, being gay isn’t really much of a problem. Having same-sex attraction isn’t necessarily inherently evil in and of itself.

So says The [Social] Gospel Coalition.

The actual Gospel as presented in the Word of God says something quite different.

(For more detail and some insightful analysis of The [Social] Gospel Coalition’s destructive approach to this culture-sweeping issue, check out The Grace Of Shame: Gospel Coalition And Pedophilia by Tim Bayly.)

Consider the following from Romans 1:18-27 (with bold emphasis added):

“For the wrath of God is revealed from heaven against all ungodliness and unrighteousness of men, who by their unrighteousness suppress the truth. 19 For what can be known about God is plain to them, because God has shown it to them. 20 For his invisible attributes, namely, his eternal power and divine nature, have been clearly perceived, ever since the creation of the world, in the things that have been made. So they are without excuse. 21 For although they knew God, they did not honor him as God or give thanks to him, but they became futile in their thinking, and their foolish hearts were darkened. 22 Claiming to be wise, they became fools, 23 and exchanged the glory of the immortal God for images resembling mortal man and birds and animals and creeping things.

24 Therefore God gave them up in the lusts of their hearts to impurity, to the dishonoring of their bodies among themselves, 25 because they exchanged the truth about God for a lie and worshiped and served the creature rather than the Creator, who is blessed forever! Amen.

26 For this reason God gave them up to dishonorable passions. For their women exchanged natural relations for those that are contrary to nature; 27 and the men likewise gave up natural relations with women and were consumed with passion for one another, men committing shameless acts with men and receiving in themselves the due penalty for their error.”

This is not a trick question.

This is not a hard question.

(Hint: Re-read the first sentence in verse 26 until you get the answer.)

With God’s clear proclamation in mind, would it be reasonable or unreasonable to proclaim a passion described by Him as dishonorable as a passion that professing Christians should enable or embrace? What consequences, if any, might flow from people embracing, enabling, and promoting that which God has clearly described as dishonorable and destructive?

Put another way, what might the consequences be for a culture that embraces The [Social] Gospel’s counterfeit gospel over the Gospel of Christ on the subject of homosexual passion?

That last one is easy: Just take an honest look at American culture, including its professing Christian subculture, and you’ll see those consequences expanding exponentially. After a long slide that’s seen professing Christians trample all manner of biblical standards for life, we’ve finally reached the point in American “Christianity” where we’re now more likely to embrace and enable homosexual desire than we are to lovingly confront and advocate repentance of it in accordance with the Gospel-fueled Great Commission.

This stage of decay is one of the clearest signs of God’s judgment washing over our proud, unrepentant culture…with The [Social] Gospel Coalition now escorting many down the path to ruin.

For all the pretense of love and kindness sprinkled on their effort, The [Social] Gospel Coalition approach demonstrates profound hatred first for God and then for those TGC is escorting to death through an unrepentant embrace of same-sex passion (all in the name of “love” and “tolerance”, of course).

Thankfully, the true Gospel presentation contained in the Word of God – in direct contradiction to The [Social] Gospel Coalition’s rank, gay counterfeit – makes it plain that, by God’s grace through the shed blood of Christ and the supernatural repentance that His sacrifice has secured, even many of those who once burned with inherently sinful same-sex attraction can and will repent and be transformed:

“Or do you not know that the unrighteous will not inherit the kingdom of God? Do not be deceived: neither the sexually immoral, nor idolaters, nor adulterers, nor men who practice homosexuality, nor thieves, nor the greedy, nor drunkards, nor revilers, nor swindlers will inherit the kingdom of God. And such were some of you. But you were washed, you were sanctified, you were justified in the name of the Lord Jesus Christ and by the Spirit of our God.” (1 Corinthians 6:9-11, bold emphasis added)

So when we see or hear the “loving”, homosexual-desire enabling pitch of The [Social] Gospel Coalition, we need to understand what’s really going on.

We need to see the lie.

We need to confront the lie.

We need to love those being led astray by TGC enough to proclaim the truth of God’s Word so that by His grace they might repent, believe, and be saved in accordance with the actual Gospel.