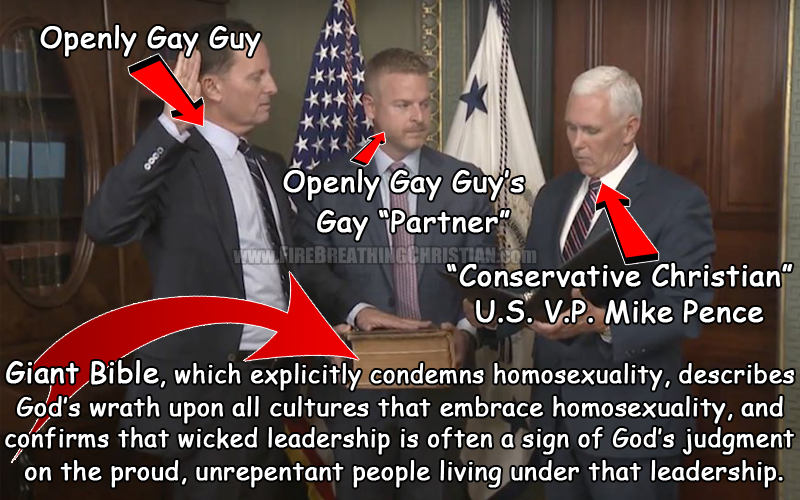 When it comes to the contrived, controlled Left/Right paradigm promoted by the system under which we (temporarily) live here in the “land of the free” and the home of the NSA, there are all kinds of fundamental questions that Christians are encouraged not to even notice, much less contemplate or answer. Questions like:

Is it better or worse when a Republican professing Christian rather than a more flagrantly non-Christian Democrat uses a great big Bible to swear in an open homosexual to help “make America great again”?

Is it more or less understandable for a Republican Christian to do such a thing compared to a more openly Leftist Democrat?

Which one should have the higher standard applied where the use of things like Bibles in swearing in ceremonies are concerned? The professing Christian Republican or the more obviously anti-Christ Democrat?

Then there’s this biggie: Is God actually God?

As in: God and Lord over the United States and everyone else in His creation?

Whatever the true answers to these questions, one thing is plain: Republican professing Christians at the highest positions of power are all about using the Bible as a trinket and prop to, among other things, swear in open sodomites to somehow, some way, “make America great again” while preserving the artificial (and wildly unbiblical) constructs and institutions that prop up the anti-Christian approaches to the state and civil government under which we (again, temporarily) live.

The latest example of this came last month when Vice President Pence used a nice big beaut of a Bible to swear in Richard Grenell, an open homosexual, as the new U.S. ambassador to Germany. During the ceremony VP Pence took the time to note and thank Grenell’s homosexual “partner”.

“The Trump administration’s highest-profile openly gay official, Richard ‘Ric’ Grenell, was sworn in Thursday as the new U.S. ambassador to Germany by Vice President Mike Pence — controversial in the LGBT community for his conservative stance on gay rights.

“With Ambassador Grenell leading our diplomatic mission to Germany, we’re going to confront shared challenges, seize our shared opportunities, and work together to build a shared future with our allies and friends in Germany,” Pence said.

Grenell — a Republican operative, a foreign affairs commentator frequently on Fox News, and a former aide to newly-minted National Security Adviser John Bolton — was nominated to the diplomatic position in September 2017.”

The ABC post includes a video of the event. I suggest that anyone reading this take a moment to view the video so that you can see for yourself how Bibles are actually viewed and used in accordance with “Make America Great Again” theology.

As reported by The Hill, “Grenell was joined by his family and his longtime partner, Matt Lashey, who held the Bible while Pence read the oath of office.”

His gay partner held the great big Bible that he swore an oath upon.

What could me more beautiful than that?

Or, put a bit more accurately, what could be more begging for the wrath of God than that?

With “conservative Christian” leadership like this, we should be in great shape for generations to come.

Nothing to worry ’bout there.

I mean, think about it: If a nation can give God the finger in such a bizarrely brazen manner and not be immediately snuffed out under an America-shaped pillar of fire, then we must be good to go. If “We the people” can to that with a Bible and still go about our business as we see fit, then aren’t we the real god here?

This is the bottom line promoted by Statism in all its forms and flavors, American included.

The State is god – the one and only real god – in practice. All other “lesser gods” may be tolerated or given lip service, but only insofar as they conform and submit to the will and dictates of The Almighty State.

If not, watch the ABC video again.

After learning these details and soaking in that video footage of what must be called a flagrant mocking of God and His Word as a part of routine official U.S. business, actual Christians may want to consider a few important questions, such as:

What does this approach to leadership tell us about America’s view of God and His Word?

If God is God, what does this sort of leadership tell us about America’s future in God’s creation?

Who does Mike Pence fear more (at least in this recorded instance): The Lord or The State?

Do we even want leaders who are Christians – real Christians who will actually stand for Christ and His Word rather than using it as a prop in a gay swearing-in ceremony?

These are not only fair questions to ask. They’re vitally important. They must be contemplated and answered biblically if this culture is to avoid being wiped cleanly from the face of God’s green earth, as have all unrepentantly prideful cultures before it.

Avoiding these questions is not a viable option in God’s creation.

Avoiding repentance is not a viable option in God’s creation.

Unrepentant pride and open abuse of God’s Word is not a viable option in God’s creation.

That goes for “We the People” just as surely as it applies to every culture in human history.

Maybe we should set aside “making America great again” for just a second, open up our Bibles (like the one Pence swore the gay guy in on) and actually read it…and submit to it…as if, you know, God really is God.

Then, and only then, we will have a real chance at true life, liberty, and freedom.

Until then, we will only get (and deserve) more of the judgment that inevitably follows such rank abuse and disdain for God’s Word.