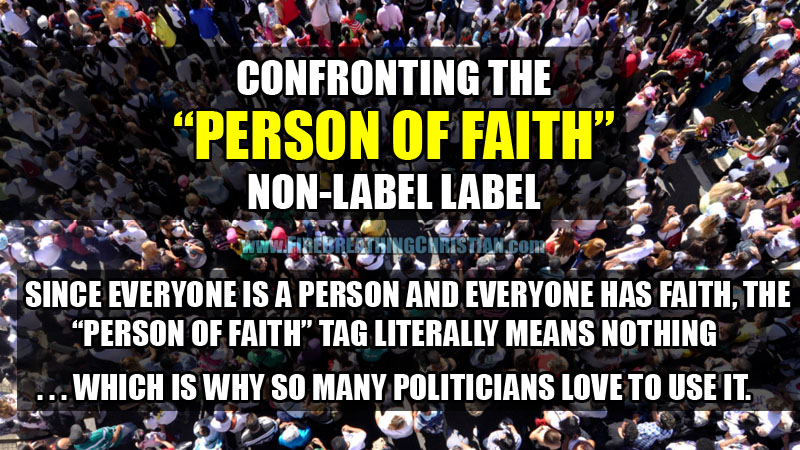 When a politician in America describes themselves as “a person of faith”, what are they telling us about themselves?

Everyone has faith and everyone is a person, so claiming to be a “person of faith” literally says tells us nothing about the person making the claim.

As we all know (or ought to by now), politicians are well known for constantly striving to find catchy new ways of sounding like they’re taking a hard, principled stand when, in fact, they’re really not taking a stand at all. Sadly, that’s what’s usually going on when the “person of faith”, “man of faith” or “woman of faith” label is deployed.

The problem for these politicians and those that follow/enable them is that faith is only as good or meaningful as the object in which it is placed. Having faith, in this context, is as likely to be a dangerous and destructive thing as it is to be a good and helpful one.

If you have faith in Allah, Lucifer, or any other false god figure, your faith is a wrecking ball that will destroy much on its way to its own well deserved spot in Hell.

If you have primary faith in secular education, secular approaches to God’s creation of science, America, patriotism, money, the military, economic success, or any other otherwise good thing (when subjected to and submissive to Christ as Lord in every legal/political/economic detail), that faith too is a flamethrower on the verge of burning down even the things it’s proponent claims or pretends to love.

Primary faith in anything or anyone but Christ is evil. It is destructive. It always and inevitably leads deeper into darkness and ultimately to death.

It is, in a word, idolatry.

When they claim “faith” without defining anything about the object or goal of that faith, they’re reaching for the credit or affirmation of being associated with whatever the hearer of the claim pours into its meaning while not actually making any real association with or commitment to that thing (whatever it is), thereby avoiding offending anyone who might not like the specific object of faith that would be identified in an actual clear and biblically sound profession like: “I’m a Christian” or “Jesus is Lord”.

The average American hates that stuff.

In our unconverted, unrepentant, natural condition, we hate the exclusivity of Christianity.

We hate Jesus’ exclusive claim to mandatory lordship over us in every area of life (as opposed to maybe just on Sundays or during prayer time).

That hatred pervades even most “conservative Christians” in America these days. The American “Christian” sub-culture is loaded with and defined by an open disdain for the lordship of Jesus in detail.

In other words: We love faith as long as it’s not clearly articulated Christian faith, which centers on our need to repent of our self-referential rebellion against the lordship of Christ and advocates our submission to Him in every political, legal, economic, educational, and artistic thought or action. (See: The Gospel-fueled Great Commission in Matthew 28:18-20.)

To be sure, there are many actual, sincere (and sincerely confused and/or ignorant) Brothers and Sisters out there in the political ream (and others) who play this game without thinking. Most of those reading can personally relate to this. I know I can.

Even so, if we love these people, we will not let them continue in this destructive blindness.

If we love them, we will confront and correct them, kindly whenever possible and never out of arrogance or a spirit of self-centered pride, but out of a true love for them, the culture they influence, and the Christ who is Lord above all things in America and everywhere else.