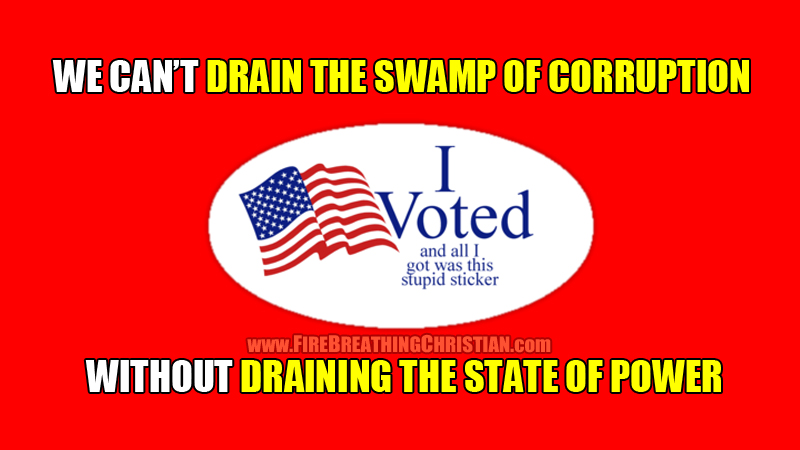 I’m only in my forties, but it seems very old of me to remember a day back when American conservatives actually seemed to want small government.

I say “seemed” because I now realize that they never wanted small civil government. At least not for as long (and far longer) than I’ve been alive.

They just want their massive Socialist/Statist fantasy to be slightly smaller than the Left/Democrat/Liberal version…at least for now. Five or ten years down the road, the Liberals will have moved on to bigger Socialist dreams and American “conservatives” will be largely defending Liberal programs of today as the baseline standard for American conservatism.

Everything in recorded American history confirms this.

Secular conservatism is as sure a path to Hell as is secular Liberalism. They just take somewhat varied routes to the same destination: State-controlled/managed/licensed everything.

Put another way, the Pagan Political Left and Pagan Political Right are two wings of the same Pagan Political Dragon, and that Dragon’s goal is to make each and every one of us as dependent upon (and therefore submissive to) the State as possible…all “for our own good”, of course.

Keep this in mind as you vote or don’t vote or just watch/endure the election season silliness. (For the record, I did vote this morning in my home state of Tennessee. Also for the record: I didn’t even get the “stupid sticker” referenced above. They had none on hand this time around.)

Keep in mind that until and unless we remove biblically unauthorized power from civil government, we will never be on a real path to true, lasting peace, prosperity, or security,  as a culture. We won’t even be on a path to basic, entry-level adulthood as an option for the vast majority of our people.

Until we remove the regulating/controlling/dominating “help” of the State, we will never be a culture defined by healthy, mature, free, responsible and capable people. We will instead be a culture defined and dominated by dependence on the State – a land loaded with kept children of Uncle Scam who cannot imagine, much less productively pursue, an adult life of true freedom (where the freedom to fail is an essential component).

With these things in mind, here are three quick points to ponder on Primary Election Day:

2. Scripture does NOT allow civil government 99% of the power it claims today in “the land of the free”. (Public schools, licensing professions, Social Security, massive military, printing magic fake money out of thin air, etc.)

3. The surest way to remove corrupt, power-hungry people from the political scene is to remove the power that we’ve given to civil government in direct violation of biblical parameters. You can’t “drain the swamp” by changing out the people feeding on the power wrongly surrendered to the State. You drain the swamp by draining power from the State and returning it to the individual, the family, and the church.

May God grace us with the brokenness to recognize and repent of our past and present pride-fueled idolatry of the State and the deep, pervasive bondage that our idolatry has produced.

May He then grace us with the opportunity and desire to do the very hard and painful work of casting off the “helpful” chains of Statism so that we might struggle and one day soar as truly free people.