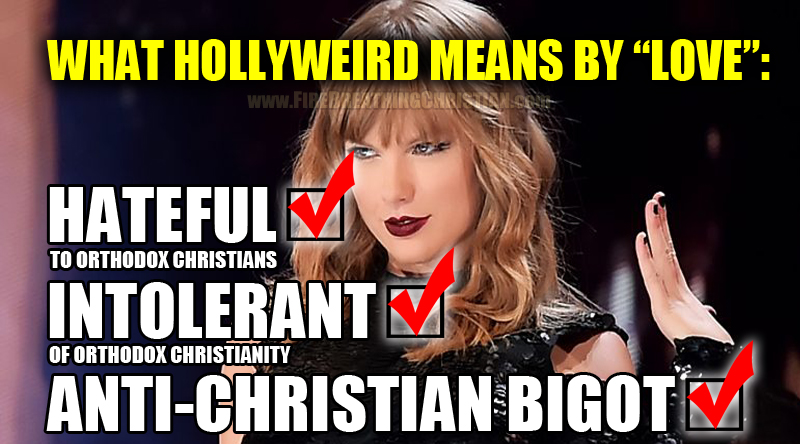 What once was a crowd of God-hating nutjobs screeching incessantly about “keeping religion out of politics” has interestingly (but not surprisingly) metastasized into a raging mob that’s all too willing to use its religion as a political tool by which to bludgeon, shame, and crush all who dare dissent from their more-obviously-insane-by-the-minute agenda. (Remember: These people actually think that Bruce Jenner is a woman…and that to publicly oppose that flagrantly moronic position is an expression of “hate”.)

In recent weeks we’ve been treated to several examples of this newfound public/political religious zealotry on the Left, including Taylor Swift’s open promotion of hate, intolerance, and anti-Christian bigotry…all in the name of promoting peace, love, and tolerance, of course.

“Look what you made her do.

Taylor Swift, the pop megastar whose recent political awakening has been something to watch, donated $113,000 on Monday to an LGBTQ advocacy group in her adopted home state of Tennessee.

Swift informed the Tennessee Equality Project of her donation — the equivalent of one year’s operating budget for the organization — in a handwritten note addressed to its director, Chris Sanders.

“I’m writing to you to say that I’m so inspired by the work you do,” Swift wrote. The TEP and a group of Tennessee’s religious leaders are actively opposing bills moving through the state’s Republican-run legislature that specifically target LGBTQ individuals.

In her letter, Swift refers to the “Slate of Hate,” six bills that advocates say are discriminatory. The legislation covers topics such as adoption by LGBTQ parents, transgender students and workplace protections.

For years, Swift kept her politics close to the vest — or sparkly leotard in her case — and critics pounced. But in a piece published last month in Elle magazine, Swift wrote that she had wanted to educate herself before speaking up.”

To get a better sense of Taylor’s infusion of religion into her attack on orthodox Christianity, here’s her letter: 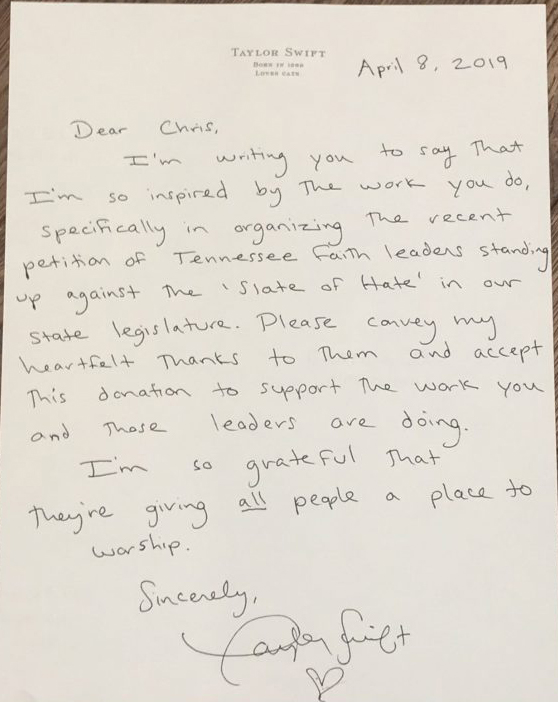 It’s hard to overstate the amount of hate, intolerance, and bigotry flowing through both Swift’s letter/check combo and WaPo’s coverage of it.

For them, openly venting hatred against the most basic of orthodox Christian views on family, sexuality and marriage is…get this: an expression of love.

For them, openly trampling the religion of orthodox Christians is infinitely less significant than “hurting the feelings” of an LGBTQRSTD-type anywhere at any time.

For them, intolerance of orthodox Christianity is essential to…the pursuit of tolerance.

They get to be aggressively intolerant…in the name of opposing intolerance.

They get to use their religion to crush and silence ours…in the name of promoting tolerance.

But wait, it gets better:

For them, anti-Christian bigotry is not only a viable option, but a necessity.

Orthodox Christianity and those unenlightened enough to cling to it must be shamed and politically oppressed at every turn.

That’s how “tolerance” works best in the depraved minds of Swift & Company.

Orthodox Christianity must be silenced.

It must be shut down.

In this context, the bizarrely hypocritical and destructive actions of programmed slaves to the Progressive agenda like Taylor Swift should come as no surprise, but they should be pointed out for what they are at every opportunity.

These are simple facts.

We need not be angry or snarl when we share such truths. We should instead be as gracious and sober-minded as possible as we go about the important business of clearly, calmly, and publicly confronting the likes of Taylor Swift and her many advocates in dinosaur media with the fact that we see them for what they are.