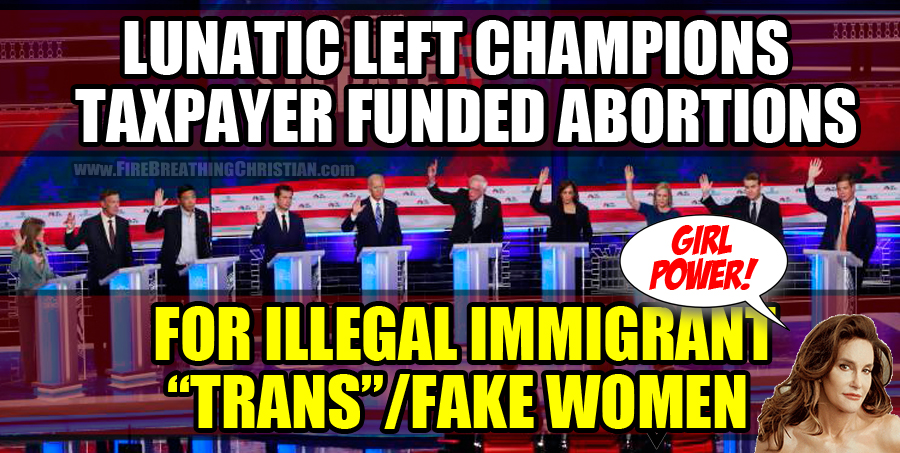 At the risk of appealing to mathematics and logic, both of which are obviously racist (duh!), what do you get when you add up the following:

Why, taxpayer financed abortions on demand for fake women who enter the country illegally, of course!

Welcome to our Sociopathic Socialist Hell!

On the bright side (and yes, there is a bright side), it won’t last much longer.

If there’s one thing to be thankful for when it comes to the Left’s presently unfolding suicidal plunge into stark raving insanity, its that the dive can’t go much deeper before fully realizing the “suicidal” part of the equation.

Child sacrifice, the destruction of the family, the promotion of gay mirage (pronounced “gay marriage” by some), and the replacement of family/church with the almighty state, all fueled by a fiat-currency economic system literally designed to enslave the masses through debt until the whole thing implodes upon itself – these things all add up to an inescapable, unavoidable, and now fast approaching destination: Death.

That much should be obvious, but we’re not here to talk about the obviously suicidal nature of the American Socialism program. At least not in this article. What we’re here for now is a glimpse into the insanity part of it – the sheer craziness that’s more and more clearly defining the proclamations and programs offered up by the Progressive tools sprinkled atop our political system.

This state- and corporate-sponsored installment of How Insane Can We Get?! comes by way of Democrat President wannabe Julian Castro who, in a moment of calmly relayed madness, told a global audience that he believes that Americans should be forced to work and pay (aka “enslaved”) for the benefit of fake women (“trans” men) who want access to child sacrifice services on demand.

Townhall covered Castro’s calm, cool, prime time display of Progressive insanity in an article astutely titled Julian Castro Said The Most Insane Thing Ever About Abortion, which began as follows:

During the first Democratic debate, presidential candidates battled to out-do one another when it came to proving who was more in favor of killing babies–but one response left everyone scratching their heads.

Answering a question about whether his health care plan would cover abortion, Julian Castro said it would, and proceeded to make a bizarre case for “reproductive justice.”

“I don’t believe only in reproductive freedom, I believe in reproductive justice,” said the former secretary of Housing and Urban Development. “What that means is just because a woman or, let’s also not forget, someone in the trans community — a trans female — is poor does not mean they should not have the ability to exercise that right to choose.”

Yes, you read that correctly. He argued that biological men should have the right to abortion.”

What the article didn’t mention is the applause that Castro received multiple times during his verbal barrage of mind-numbing idiocy.

Yeah, they clapped and cheered.

This means several noteworthy things, and while many of those things are terrible and sad, one of the biggest and brightest truths made plain by the clapping and hooting of the gang of murderous imbeciles cheering Castro on was this: Their time is almost over.

Their suicidal plunge into stupidity is almost complete.