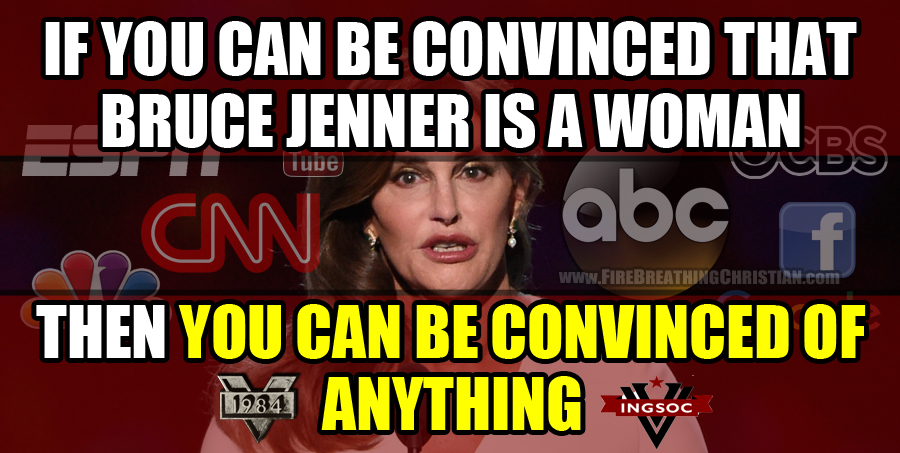 This is why Fakestream News relentlessly pumps the “transgender” lie.

Oh sure, there are a million other goals and agendas woven into the Fakestream trans propaganda flow, but at its base the Big Idea underneath it all is Fakestream News’ desire to program the masses to such an extent that the average person will publicly embrace and proclaim any lie that they are told to embrace and proclaim.

So Bruce Jenner is now a woman.

And women need to be respected.

If you thought this mass exercise in Fakestream programming was about redefining men and women, you’ve only caught the thin edge of the wedge. The Fakestream program is much bigger and much more ambitious than that.

The ultimate goal of Fakestream programming isn’t to redefine man, woman, boy, girl, and family, though each of those concepts has certainly been targeted for assimilation along the way to the ultimate objective.

Everything is to be redefined.

That means redefining the tools that we use to define things. Like language.

When the masses have been programmed to look at a man and refer to him as a woman, far more than the redefinition of man and woman has been accomplished.

The way has been paved to much deeper and darker places.

The path has been cleared so that anything is possible.

Think about that…while you can.

When Fakestream News pumps the “transgender” lie, they’re paving the way to everything that they want. Not just some things. Every thing.

That’s why they do what they do.

And that’s why we must mock, shame, and dismiss them into irrelevancy each and every time they pitch the laughable (yet profoundly destructive) lie of “transgender”.