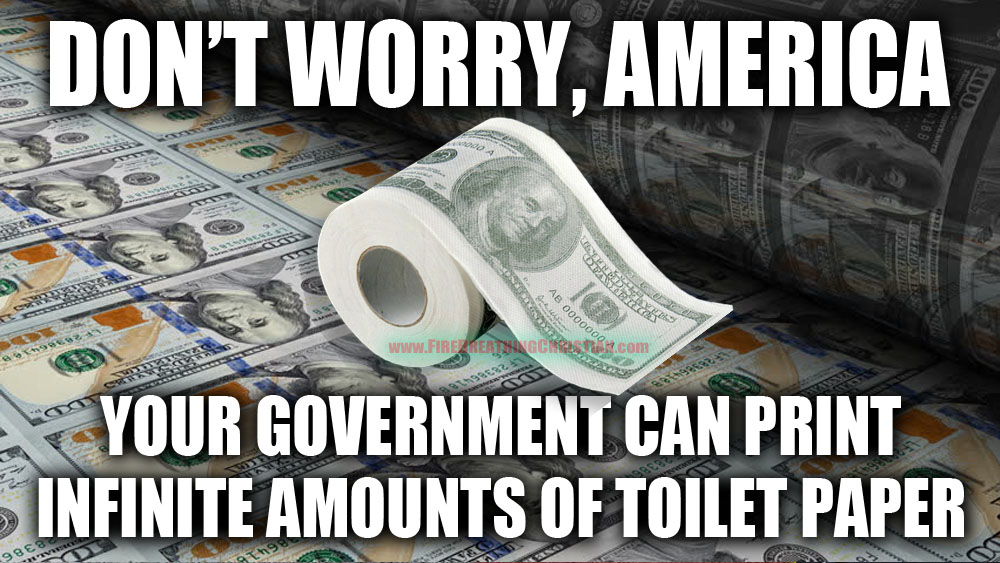 The Coronavirus, while a serious problem that should be treated as such, is nowhere near the Big Bad Beast that many are making it out to be. Under cover of mass confusion and fear, massive power grabs by centralized powers from governments to mega-corporations are on full display. Tyrants and tyrant wannabes from Beijing, London, and Washington DC to Twitter, YouTube, and Facebook are on the march, looking to make hey in light of this latest opportunity-drenched crisis.

While each of these subplots are worthy of attention, we shouldn’t let them distract us from the pulsing black heart at the core of the System of systems making its latest grab for power over us now.

As “to big to fail” banksters and their friends are once again bailed out, prevented once again from having to suffer a downgrade from their hyper-luxurious lifestyles, even though they have once again pursued wildly reckless, irresponsible, and destructive approaches to managing nearly everything they touch, what happens to the masses? Well, their already near-zero savings interest rate gets slashed to zero (on its way to negative rates) and their currency (not to be confused with real money) gets radically devalued through massive “money” printing, with both the currency printing and the interest rate slashing being the key tools used to once again prop up laughably inflated asset bubbles and the elites who own them.

This is where it’s important to pause and note one key fact where Coronavirus is concerned, especially since it’s already being marketed by the elites and their tools as “the unexpected reason” for our sudden economic plunge.

While CV itself is indeed a significant threat and its emergence was generally unexpected by most, it is in no way The Reason for our economic collapse from “roaring economy” into Great Depression Squared in a matter of weeks.

The Chinese Coronavirus is merely the pin that’s now bumping into and popping the many massively overinflated asset bubbles that have been encouraged to define our economy and culture for generations. The prevalence of fiat-currency fueled (and perpetually re-inflated) asset bubbles (like stock and home prices) is not and has never been a sign of a healthy economy. It is and has always been instead a telltale sign of a sickly, diseased, and dying one, or, more truthfully in our case, an already dead economic system that was merely shambling on like a zombie pretending to be alive before a significant nudge came from any direction and tipped the pathetic dead creature over and into its grave. That nudge has come in the form of Chinese Coronavirus.

This is what it looks like when the rank evil of our system collides with the God whose nature defines all of His creation. More specifically in this instance, this is what it looks like when a culture committed to the pursuit of black magic fiat economics finally breaks itself upon the unbreakable truth of Proverbs 11:1: “A false balance is an abomination to the Lord, but a just weight is his delight.”

We can be absolutely certain of one thing: Our fiat currency – a US Dollar fabricated effortlessly out of thin air by a few so that they might then use their counterfeit wealth to own and control everyone and everything beneath them – is an abomination to the Lord. He despises it and He will destroy it…as He is now.

As He tears it down and razes the systems built upon it, the unbelievably irrational nature of the currency is finally becoming obvious to a large and growing number of people.

Two trillion for this bailout, four trillion for another, more trillions for the next, and a promise from the Federal Reserve and our “leaders” in DC to print/type currency into existence infinitely if necessary is finally beginning to wake people up to the fact that they’ve been profoundly duped in the most fundamental of ways for a very long time.

Perfectly rational questions, long ignored or avoided by those wishing to preserve their blissful Matrix-like slumber, are now being openly discussed. Questions like:

The people and systems who’ve been profiting from our fiat economic system at the expense of the masses would very much like to use Coronavirus as an excuse for the unfolding implosion of their long-teetering house of cards, and also as a distraction to prevent the long-abused masses from contemplating the nature of the zombie economic system that is now finally tipping over and crashing to the ground.

We can’t let either of those things happen.

We cannot allow ourselves to be distracted from the true nature of our economy as an already deathly diseased and corrupt system that merely had the illusion of health when Coronavirus came along.

We cannot allow ourselves to be distracted from noticing just how wrongly we’ve been treated through a system that was literally designed to make us dependent slaves (and more so with each passing generation).

And we cannot allow what’s been labeled as “capitalism” or “free markets” in America for the last 100+ years to be confused with actual capitalism and actual free markets, which are antithetical to our central bank managed, Big Government empowering “All-American” system. Our system is not about freedom, liberty, and true capitalism. Our system is all about centralized control and securing the power of elites over the masses.

We owe it to our children and future generations to pay close attention to what’s actually going on here, all in context of what’s been going on by design for a very long time before we got to this point.

Fiat economy advocates have been feeding on and manipulating us for generations. It’s high time they got full credit for what they’ve done…and are punished accordingly. Theft and fraud, especially on such a staggering scale, are not things that we can allow to go unpunished, are they?

By routinely socializing losses taken when artificially inflated asset bubbles pop (passing the losses on to taxpayers in the form of government bailouts) and privatizing gains (allowing the investor class to keep its gains in-between crashes), this system is literally designed to reward incompetence, selfishness, and the most brazenly anti-productive behavior imaginable where elites are concerned, all while increasing the present and future bondage of the masses through perpetual currency devaluation and income stagnation (at best).

This system is, in a word, evil.

Or, to borrow again from Proverbs 11:1, it is an abomination.

This is the economic system that’s dying…well, formally anyway. In truth it’s actually been dead for a long time. It’s just that now the flies are buzzing around in such large numbers that more people are starting to notice.

As this zombie nightmare economic construct finally crumples and drops down into the dirt under the weight of its long war against God’s creation of economics, let’s not allow ourselves to be distracted by the many conspiratorial sideshows and Big Government “stimulus” salvations being offered up.

The bottom line is this: Our economy was profoundly sick and twisted long before the Chinese Coronavirus came along.

The Fiat Currency Virus has been plaguing us for generations by empowering elites, enslaving the masses, destroying real savings, and rewarding all manner of evil..all by design. It was always destined to lead us into the hellish scenario we face now, and the much worse that’s right around the corner.

The endless currency creation underway to “save” us only underscores that truth.

(See also: Fiat $lavery: We have been bought and paid for…with nothing.)