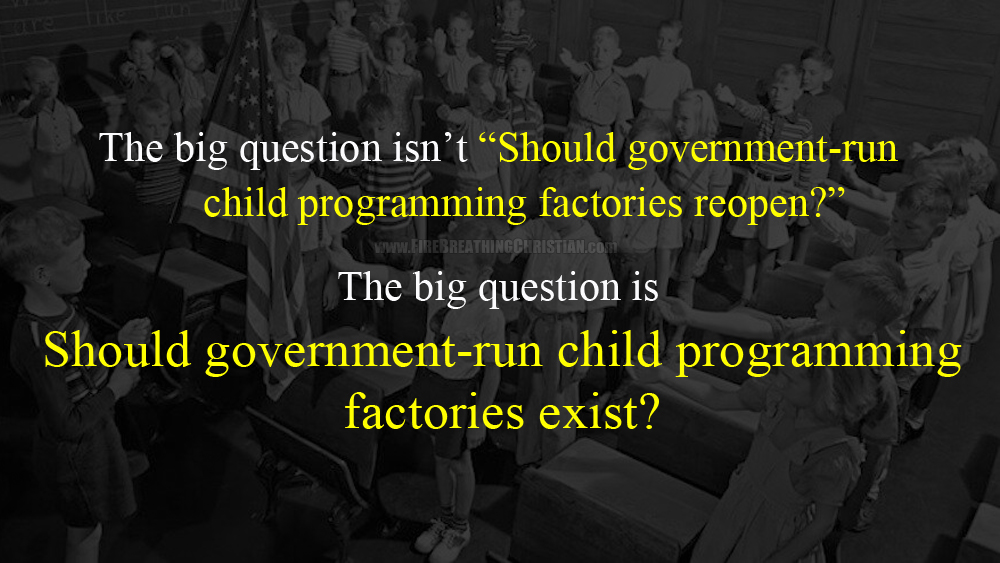 If we don’t ask the right questions, we’ll never find the answers that we need most, and everything about the systems dominating our dying culture is aimed at preventing us from asking – or even thinking – those most important questions.

Questions like: Should government be given power to shape the minds of the young?

Just hearing (or reading) that question for the first time can be jarring to most who’ve been programmed through State- and corporate-managed pop culture and “education” systems. The simple, clear concept carried plainly by the direct question has probably never even crossed their mind…and that is not accidental. Moreover, it is likely to inspire a knee-jerk hostility toward anyone who would dare to ask such a question. This too is not accidental.

Our “education” systems are designed to prevent, or at least significantly inhibit such thoughtcrime as that which would lead someone to pose such dangerous questions.

Dangerous to the system that has captivated us and inspired parents for generations to freely hand over their little ones for State-run mind-sculpting, that’s what.

Even when said mind-sculpting includes the notion that there is no absolute standard of morality or truth, we continue playing along like good little lemmings.

Even when the state certified programming adopts the absurd and culture-destroying notion that homosexuality is perfectly wonderful and “gay marriage” is totally legit, we play along.

Even when the programming religiously avoids teaching the most essential of truths, we play along.

And then we act surprised when each successive generation of product from these government-run factories is more Statist, more state dependent, more Marxist, and more anti-Christian than the last.

So here we are in 2020, after generations of playing that game with the minds of our children, expressing “shock”, “horror”, and “outrage” at the completely predictable results of the path that we freely and quite proudly chose for our culture.

But now, just as their product comes into full bloom, these government-run child programming systems are reeling. They’re cracking up fast. They’re on the verge of total collapse.

Not because waves of brave, repentant preachers or church leaders are confronting the problem and behaving like actual Christians by plainly proclaiming the crystal clear Word of God on the subject of children’s education. No, very few Americanized (and usually State-programmed themselves) pastors are doing anything like that (though they are railing a lot about how important it is to take a stand by not wearing a mask).

No, with Americanized pastors mostly supporting the enemy operation in this area, the thing that God has sent to rattle and shake the government-run child programing system is…a virus.

Whatever you think about that virus, its impact has been and continues to be both profound and undeniable, and one of its greatest areas of impact has been on the golden idol of government-run child programming factories – aka “public schools”.

Already reeling and teetering on the brink of extinction under the weight of massive inefficiencies inherent in its outdated, dinosaur-like brick and mortar approach to “education” delivery through massive centralized bureaucracies, this system is practically begging to be put out of its misery.

Like a long-shambling zombie that finally seems do be just about finished dying, it’s tipping over and beginning to fall.

And what are we doing in response?

What are we doing to help this explicitly anti-Christian, pro-Big Government, pro-sexual perversion, inherently child abusing system finally die and go away?

Why, we’re propping it up, of course!

Yes, we must save this zombie!

We must keep it going!

For the sake of the economy!!!

We must do anything necessary to enable it to continue feeding on and forming the minds of our children!

Even – and sometimes especially – our “Christian leaders”.

Rather than asking the right question, we have been conditioned to ask – and fight feverishly – over the wrong question; a question that presumes that the State should program the minds of the young (’cause, ya know, that’s working out sooooooooo well).

So-called “conservatives” fight tooth and nail over State-run healthcare (which, for the record, I agree is a terrible concept), but when it comes to the State-run mind-shaping of children, that’s a sacred and beautiful system that must be cherished and defended at all costs (and man, have those costs been high).

It’s almost as if we’ve made a great and terrible god – or idol – out of our government-run child programming system.

This idolatry is why we no longer ask – or even want to consider – the right questions anymore.

The “education” we’ve been provided by the state and its corporate sponsors has removed that basic desire to seek truth at a foundational level.

For all of the hype and propaganda that Americans like to parrot about freedom, open-mindedness and tolerance, ours is a culture dominated by idiotic concepts that you’re not supposed to even think about challenging publicly.