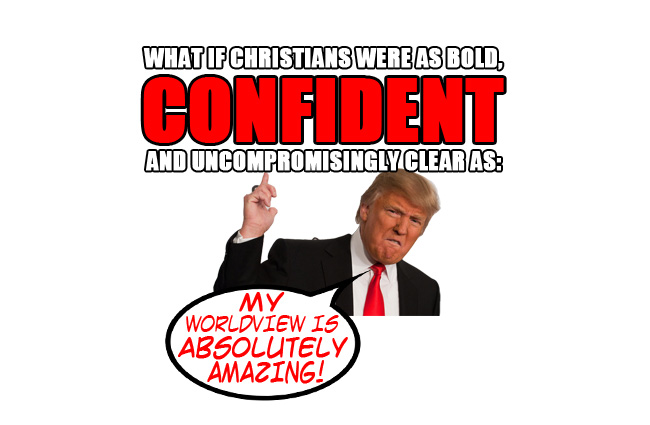 It’s no mystery why Donald Trump, also known as The Donald and also known here as The Trumpinator, is crushing his bug-like competitors for the Republican Party nomination.

No mystery at all.

Just ask someone – anyone – who is even marginally supportive of the Trump 2016 campaign why they are into that campaign at all and you will almost certainly hear some version of, “Because he speaks plainly! He says what he believes! He doesn’t shut up when the PC-police tell him to!”

The truth and apparent political value of this sentiment seems undeniable, at least as far as it goes.

The Trumpinator is indeed speaking plainly. He’s rocking boats. He seems very comfortable openly sharing hard “truths” (as he sees and/or presents them, anyway) in a refreshingly clear and confident manner. He’s willing to actually stand and really fight. This is pretty much the antithesis of what we’re used to from Pagan Right and Pagan Left establishment candidates, which is why he’s so appealing and attractive to a population that is repulsed by its own ruling class of political elites.

The Donald is surging and soaring because he’s making a clear, bold presentation of a particular worldview. Whether one agrees with the details of that particular worldview isn’t necessarily the point. It’s his speaking clearly, boldly, confidently, and unapologetically that is scoring Trump most of his points right now. (See also: Trumpamania runs wild! (Yes, he can really win…and yes, we really deserve him.)

He is dominating a field of the sort of whimpering, wandering, uninspiring political puppets to which we have become accustomed…and by which we are now repulsed. He’s rolling along briskly over his opposition like roaches in a road under the wheels of a Hummer primarily because he is demonstrating the confidence and boldness that our pagan “experts”, “leaders” and “teachers” have been encouraging us to avoid at all costs and disparage when it rears its ugly head because, you know, nobody should be that confident.

In this we see the sad, pathetic result of generation after generation of Pagan/secular programming through State-run “schools” and Corporate-managed pop-culture, through which we’ve been “educated” to believe that such confidence and certainty as displayed by The Donald cannot be real or genuine in the truest sense because no person has access to a worldview that can be understood with sufficient clarity to inspire such certainty.

This is the purposefully manufactured weak, watery, wimpy cultural context that has proven to be the hot butter through which The Trumpinator’s knife is now gliding. This is the limp wristed culture that the limp wristed pseudo-gospel of the professing Christian church in America has brought about over the past 100-150 years or so. (See: Limp Wristed Gospels Make Limp Wristed Cultures.)

Put another way: Donald Trump is surging and only seems to be gaining momentum with his confident advocacy of a wildly man-centered, utterly unrepentant, Christ-mocking worldview (see: When Conservatism Trumps Christianity) because the path has been cleared for such Pagan Republican-ish “progress” by a professing Christian church that has long abandoned the Gospel-fueled Great Commission and the true confidence, clarity, and boldness that accompanies it.

Since the professing American church would not faithfully proclaim and pursue Christ as King to rule over us in practice, that church has instead paved the way for the likes of Bush, Clinton, Bush, Obama, and now possibly The Donald to rule over us instead.

Wouldn’t it be awesome if Christians were even half as passionate, bold, and unapologetically clear about the beautiful (but often very hard, convicting, and therefore unmarketable) truths of Scripture as The Donald is confident and clear about his openly and oh-so-proudly pagan worldview?

Wouldn’t it be neat if Christians actually desired to see every political, economic and legal thought taken captive to Christ (see: 2 Corinthians 10:5) as much as Pagan Right Republicans desire to see every House, Senate, and Governor’s seat taken captive to the Republican Party? (See: Presuppositional Law: Where we begin with law determines where we end.)

Wouldn’t it be supercool if Christians were as eager to become and create obedient disciples of Christ in every nation and in realm of life as much as Pagan Right Wingers are eager to secure and “improve” overtly Socialistic systems of State-dependence like Social Security and public “schools”? (See: How’s that Pagan “conservatism” workin’ out for ya, Christian?)

Whoah, now that would be awesome, huh?!

Choose this day whom you will serve, my fellow Americans.

Choose this day the Source and Object of your hope, confidence, boldness, security, and zeal to stand and fight.

Lord willing, we will soon be broken in humiliation and begging for repentance, something The Donald openly dismisses. (See: Will America repent or will America be destroyed?)

Trump is all about pride.

American pride, to be precise.

He’s also all about “making America great again” apart from repentance and submission to Christ as King in practice…which is why he is “absolutely amazing” to so many American “Christian conservatives” right now.