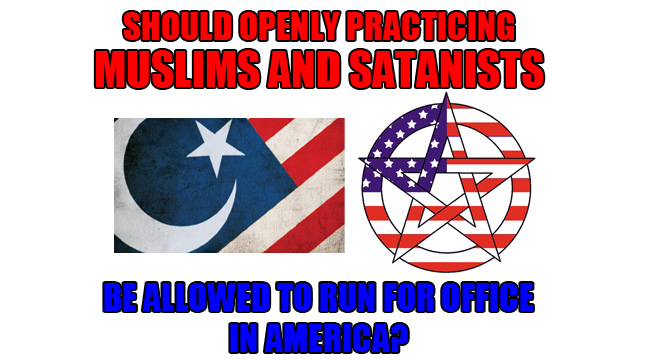 Should an openly practicing Muslim be allowed to seek and hold office in America?

What about a Satanist? Should an openly practicing Satanist be allowed to seek and hold office in America?

While the pilgrims and Puritans of America’s early days wouldn’t have required more than two nanoseconds (tops) to reject such notions (and follow-up with an obviously much-needed presentation of the Gospel), these sorts of questions are being seriously considered at some length by many – including many professing Christians – in America in the wake of Presidential candidate Dr. Ben Carson saying on Sunday that he wouldn’t support a Muslim for president, and the answers that most professing Christians in America are coming up with are decidedly…well…not Christian.

The Christian Post, among many others, observed that “he was wrong to say that.”

Ted Cruz jumped in there too, citing the Constitution as the gold standard in determining whether open worshipers of false gods should be allowed to seek and secure leadership positions in America. (See: Why do we allow the open practice of Islam, witchcraft, and Satanism in America?)

Then Doug Wilson then chimed in, bringing some much needed sanity to the scene:

As you may have seen, Ben Carson was asked if he could support a Muslim in the presidency. He said, no, absolutely not. Forget about it. He was then asked if he could support a Muslim in Congress. He said that would depend on candidate, positions, etc. Now there are some internal tensions in those answers, but unpacking those is not my purpose today. In the uproar that followed, Ted Cruz observed that the Constitution says that there will be no religious test for holding office, and that he, Ted Cruz, is a constitutionalist. Unlike that Carson guy.

Carson was asked if he could support a Muslim in the presidency. He was not asked if a Muslim should be legally and constitutionally eligible for that office. The questions are entirely distinct. A man could, without contradiction, say no to the first and yes to the second. He could also say no to both, but he would then be applying his anti-Muslim views to two separate questions.

So the question before the house is not whether we should make it constitutionally forbidden for a follower of the prophet Mohamed to become president. The question is whether Ben Carson, given a Muslim running, would support that guy.

While all o’ this Carson/Cruz/Potential-Muslim-President stuff is interesting and important on many levels, one thing we should hope and pray that American Christians will come to understand and embrace is that when God explicitly prohibits the open worship of false gods (like Allah, for example, or Satan, for another), He is not playing games. He is not making “a suggestion”. He is telling is how it is; He is explaining reality to us as it actually exists everywhere in His creation…which just so happens to include America.

So when we dich His Word and grab on to the notion of secular “religious pluralism” as a good and noble thing, we are both mocking God and begging for His wrath upon our land and culture.