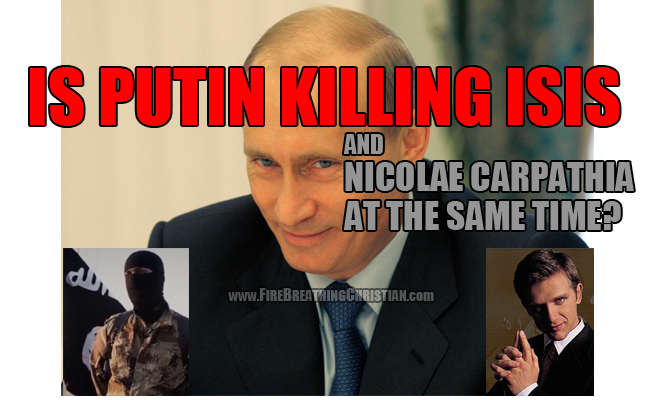 Could Russia’s Vladimir Putin be killing – or at least seriously wounding – two forces of satanic thought and cultural decimation at once?

Could “Mad Vlad” at this very moment be dealing death blows to not one but two manifestations of the true (meaning: biblical) spirit of antichrist?

Could the Putin-directed Russian army and air force even now be crushing both ISIS…and Nicolae Carpathia?

(For those of you who have been graced with a blissful state of unawareness as to what a “Nicolae Carpathia” is, Nicolae was the big bad Anti-Christ villain in the wildly popular Left Behind books (and subsequent films) that have captivated the hearts, minds, and wallets of gajillions of evangelicals in America.)

Talk about an awesome two-fer!

One can only hope and watch as the Rapture-focused, secular-“Isreael”-worshiping, preemptively-culture-surrendering dispensationalism that has increasingly defined American Christianity during America’s decline (no coincidence there) is shelled into oblivion, leaving its past claims to coherence and legitimacy shattered and scattered across the Syrian and Iraqi landscape.

But even if all of this is so – even if the dispensational “end times” track record of unending false prophecies, timetables, and predictions is finally being revealed to many as the farce that it’s always been, let us not imagine for a moment that this particular beast will die quickly or easily. Don’t imagine for a second that yet another round of failed prophecies requiring yet another revision as to what “a generation” is (see: Matthew 24:34) will open the eyes and minds of those who simply cannot yet let go of, much less trample underfoot, this particular idol.

And always remember in this context that apart from God’s grace you and I are complete morons. Until He opens our eyes, we will fall for anything…including the apathy-inducing, sensationalism-fueled, culture-destroying (via preemptive surrender) rot of Left Behind-flavored “end times” views.

In Vladimir Putin Just Destroyed 100 Years Worth of Prophetic Speculation, Jason Charles does a fine job pointing out many of the now Grand Canyon-esque cracks in the foundations of the dispensational spin on reality that has captivated America during her long slide down the gutter:

“Here we are in 2015 and so much of the Scofield Bible and dispensationalist view point has not only proven to be wrong, it can almost be looked at as a device of the enemy to deceive Christians. When we think about our enemy the devil, never ever discount his ability to analyze human nature and lay multi-generational plans to bring about his one-world, global empire. The 1909 edition of the Scofield Bible in my opinion was seeded into Christian thinking by our spiritual enemy. The amount of chaos and backward thinking that has been accepted as infallible doctrine as result of the Scofield Reference Bible is legion. One cannot simply untangle it’s twisted web without stepping on the toes of so many famous  and authoritative men of God who accepted the commentary found in these books without question. Some have hung their entire careers on its doctrines. . .”

Charles then goes on to connect some fairly obvious (yet often religiously ignored) dots where America, ISIS, and other key players are concerned:

Hal Lindsey wrote a second book entitled The 1980s: Countdown to Armageddon, where he predicted that “the decade of the 1980s could very well be the last decade of history as we know it”. This prediction was based off the fallacious thinking that Matthew 24: 32-34 predicted the generation that saw Israel’s return would be the last generation before Christ came back to Earth. You can bet that this statement had a dramatic impact on how Ronald Reagan viewed his presidency given the above quote. The Cold War could easily been seen as a fulfillment of everything laid out in these books during that time. Unfortunately for Hal Lindsey none of this came true. The Soviet Empire pathetically collapsed, communism was shown to be a total failure, and Russia never invaded Israel nor attempted to draw in other allies to destroy Israel.

Instead, America has now fallen to communistic philosophies, we are totally lost morally, we have legislated every Constitutional Right we have away, and our foreign policy is as aggressive and destructive as any empire in history, if not the most destructive. And who is our allies in all of this aggressive unilateral action? Israel, Saudi Arabia and other NATO actors, that’s who.

Instead of rising up against Israel as some aggressive communist state, Vladimir Putin has decried the West’s  promotion of communist ideologies and Godlessness. In a speech he made this last July he said,

“Many Euro-Atlantic countries have moved away from their roots, including Christian values. Policies are being pursued that place on the same level a multi-child family and a same-sex partnership, a faith in God and a belief in Satan. This is the path to degradation.”

This is what you didn’t read in all of these prophecy books that flooded the market place over the years. America has become more Beast-like in the past 30 years than Russia had been in the last 100, we aren’t just a minor component of Global Government we are THE engine of Global Government. We are the aggressors in almost all wars abroad globally. It is our political leaders that are the culprits who have been utilizing American backed, Saudi supplied and Israel trained rebel/ISIS fighters. . .

While I shouldn’t have to note such an obvious thing, I’ll go ahead anyway and make plain here that I am in no way endorsing Vladimir Putin as a biblically sound leader. I’m also not endorsing everything in Mr. Charles’ article, though I greatly appreciate many of the points therein.

And while I do enjoy watching the modern American Dispy/rapture view get pummeled, both literally and figuratively, I take no personal joy in the pain or hurt of others as they have their cherished idols and pet traditions exposed this way. Don’t get me wrong: I’m glad the exposure happens, especially since that step tends to be a vital part of the path most commonly used by God to bring us to a place of brokenness before He inspires us to repentance and restoration.

I say all of these things as a former die-hard Dispy/rapture-focused guy myself.

I was completely into that perspective. It was all that I knew as a child and young adult growing up in a small, loving, backwoods Baptist church in Arkansas. The Dispy/Rapture/Left Behind approach to prophecy was such an assumed, automatic thing that it was held as a basic component of true Christianity not to be seriously questioned.

Looking back, I have no trouble seeing how that approach to the Word and Great Commission of God inspired me to be quite happy, content, and not all that concerned with personally seeking out and applying what God has commanded in detail in every realm of life. Put another way, it’s easy for me to see now how that approach to Christianity inspired the practical abandonment of the Great Commission, and thereby all of the cultural rot that I watched (and personally helped to) build in America during my time in that self-serving, culturally disengaged, just-waiting-to-be-raptured condition.

My hope and prayer in sharing these things is to, all by God’s grace, do my little part to inspire thought, conviction (where appropriate), repentance (wherever there’s appropriate conviction), and restoration so that the world and all therein – a world just handed over and abandoned to the enemy by the Dispy/rapture view that has come to dominate the modern American professing Christian subculture – might be engaged and conquered on every front and in every realm in accordance with the Gospel-fueled Great Commission, all by God’s grace, all for His glory, and all to the benefit of His people.

Let us not slink into cultural corners and basements waiting out the “end times” so that we might be raptured away from our responsibility to take every legal, governmental, political, economic, artistic, scientific, and linguistic thought captive to Christ!

Let us not cower in church buildings entertaining ourselves with tales of the “inevitability” of satanic victories here and now. Let us instead actually believe that “greater is He who is within us” (see: 1 John 4:4) and that when we submit to Christ and then resist the devil, he – not we – must flee (see: James 4:7) en route to everything being reconciled and restored by the power of His perfect work on the cross!

Let us not imagine for another moment that Christ has not been clear in His command to make obedient disciples of all the nations, teaching them to do all that He has commanded…or that He has somehow not equipped His people to fulfil His Gospel-fueled Great Commission: