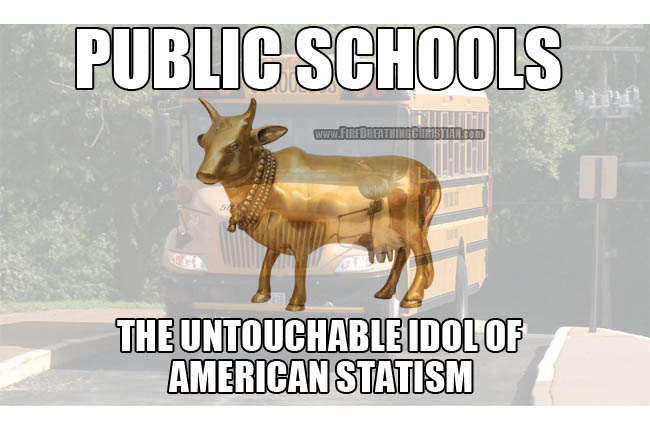 Just in case anyone out there had forgotten how much this culture and its most thoroughly programmed drones despise the concept and practice of Christian homeschooling, the Lord has graciously provided us with yet another reminder.

This time it comes in the form of a Texas homeschooling family who is being savaged by everyone from The Huffington Post to masses of professing Christians who are all about defending the golden calf of public schools in America…and destroying those who dare to clearly stand in opposition to that idol.

Think that last bit was a little over the top?

Think it was a bit much to say that Christian homeschoolers who clearly call State-run children’s “education” the sin that it is and do what they are commanded by God to do are treated antagonistically and often vigorously persecuted by professing Christian “brothers and sisters” who simply will not tolerate the Gospel command to repent and submit to Christ as King in the realm of children’s education?

Make no mistake: The idol of State-run, anti-Christian children’s “education” is so deeply entrenched in our culture after many generations of church failure to stand against the satanic model of education that most American evangelical congregations are loaded with folks who will, when the chips are down, act to defend their cherished idol even to the extent that they openly persecute those who are obeying Christ in the vital life- and culture-shaping realm of children’s education. (See: Why is the beast of Socialism eating our children? Ask your pastor.)

A primary motivator for this persecution is the conviction that obedient Christians inspire in those who cling to justifications and rationalizations for their rebellion in this major area of life. The mere presence of obedient Christians who faithfully apply and proclaim the Gospel command as it relates to Children’s education is more than enough to bring out the anger and attacks of evangelicals who are not about to tolerate the identification of sin as sin when it comes to the untouchable idol of public schooling.

This is where we are in America. The battle lines are drawn.

Before we move any further here, let’s take a sec to note two great reasons for optimism in this context:

So yeah, the battle lines are drawn and attacks are coming, but we are winning. And the more we win – the more territory we take and the more effectively we stand – the more hated we will become by those who are committed to the satanic, Statism-enabling approach to children’s education. (See: Statism 101: State-run “education” makes a State-dependent population.)

Now, back to the latest instructive example unfolding in Texas…

A court case involving a Texas Christian homeschool family has made national news because the parents allegedly have refused to educate their children in view of an imminent “rapture.” Liberal activist news outlets across the country have joined in universal chorus condemning lax homeschooling regulations and suggesting the pending Texas Supreme Court case will lead to a crackdown on homeschooling throughout the nation.

There’s only one problem. It’s all lies.

Every bit of it.

McDurmon then goes on to meticulously dismantle the “case” being made by the media against the Texas Christian homeschooling family in question. Please do check out the entire article at American Vision.

McDurmon makes plain the rank deception and dishonesty of those who stand in defense of secular, Statist, satanic “education”. The greatest threat to that construct is, of course, the Christ-centered alternative, which is why Christian homeschoolers are hated so.

American professing Christians who defend and live out a satanic model to the pursuit of knowledge become less and less able to avoid the Gospel-fueled confrontation and conviction that inevitably comes with a growing Christian homeschool presence in the culture.

American “pastors” who refuse to call sin sin in this area (and actually defend the satanic/Statist approach to “education”) have a harder and harder time being seen as advocates of the true life-encompassing Gospel of Jesus Christ. (See: “Christian leaders” STILL encourage Christians to keep feeding their children to the beast of anti-Christian/State-run “education”.)

To each and every person in each of these camps and the many other groups resisting the reign of Christ over every aspect of life in His creation, we must show love: A true love for God and people that compels us to confront and correct sin by the power of Christ through His Gospel-fueled Great Commission.

The more we do this, the more we will be hated by those rebelling against our King and His Gospel.

The more we do this by His grace, the greater the befit to us, our children, and countless unborn generations to come.

That’s how things work in God’s creation, and it’s a core principle that you will never hear taught through a State-run system of children’s “education” lifted directly from The Communist Manifesto and, before that, the serpent’s tongue in Eden.

The more you and I strive to faithfully proclaim and apply these sorts of things, the more Texas-sized persecution will be aimed our way.

For a season, anyway.

In this season of storms and challenges, let us seize the many incredible (and quickly passing) opportunities that we have to faithfully proclaim and apply the Gospel of King Jesus in every realm of life, all by His grace, all for His glory, and all to our eternal benefit.