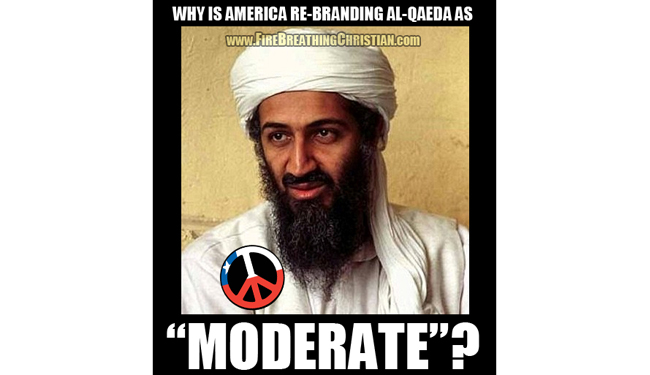 What a difference a few years make.

Seems like just yesterday that al-Qaeda was the living embodiment of evil and the reason why we must surrender our freedom and liberty to the State for the sake of “security” while pursuing wars here, there, and everywhere across the globe in the name of “fighting terror”.

Today the line being pitched routinely by The American State and its media mouthpieces (from Fox News to CNN) is that al-Qaeda and its allies are (get this:) “moderate terrorists” who are now (and really get this:) worthy of our support.

Please think on it.

Please let it soak in.

Al-Qaeda, the living embodiment of State-power justifying terror promoted as instigators of the infamous 9/11 attacks that sent skyliners into skyscrapers killing thousands, terrorizing (at least) hundreds of millions, and launching a “new normal” in America (and across the globe) where freedoms and privacy are routinely stripped away from the masses and surrendered to the State in the name of “security” and “fighting terrorism” – that al-Qaeda is now…[drumroll]…“moderate”.

And we need to help it.

So says the American State.

And if you disagree with or criticize that proclamation, you’re a threat to The State!

So just shut up and do as you’re told. Be a good patriot. Get in line and conform to the will of The State.

‘Merica: Love it or leave it, baby!

The fact that this re-branding of al-Qaeda can be “seriously” attempted so shortly after the very same monster was used as the poster child for eviscerating American freedom via the comically Orwellian “Patriot Act” and justifying a new era of perpetual war across the globe tells us a lot about the success of things like State-run “education” and Corporate-run pop-culture in transforming the majority of Americans into happily ignorant and very proud compliant little drones. (See: Statism 101: State-run “education” makes a State-dependent population.)

Even so, there is hope. Great hope. People are waking up and finally beginning to face previously unthinkable truths due to the sheer quantity and flagrancy of the lies being perpetrated in the name of the American State.

In this context, one question that seems important to ask right about now is: Why does America describe al-Qaeda and its allies as “moderate terrorists” worthy of support?

Along these lines, in a post summarizing the latest news surrounding the recently downed Russian fighter on the Syria/Turkey border, ZeroHedge made the following observation:

Note the difference in the way Russia and the US describes the FSA. For the US, they are a “moderate opposition group,” for the Russians, they are “jihadists.” Considering they are allied with al-Qaeda, and judging from the gruesome videos released by the group on Tuesday, you’d be forgiven if you’re inclined to go with Moscow’s characterization.

The FSA (or Free Syrian Army) is one of many al-Qaeda allies that The American State is constantly aiming to rebrand in any number of ways that might somehow justify sympathy and even support in the minds of an American populace largely conditioned to have the attention span of a retarded fruit fly combined with blind allegiance to anything wrapped in an American flag.

This is where American Statism has purposefully led us.

This is where American rebranding and redefining of everything from law, liberty, freedom, and even life itself was always going to take us. (See: Presuppositional Law: Where we begin with law determines where we end.)

It’s high time that we not only rejected but openly opposed these relentless re-brandings.

It’s high time that we opened our eyes and tackled hard truths head on…truths like the American State’s obvious use of al-Qaeda and ISIS to achieve the increasing bondage of American masses under the growing power of The American State.