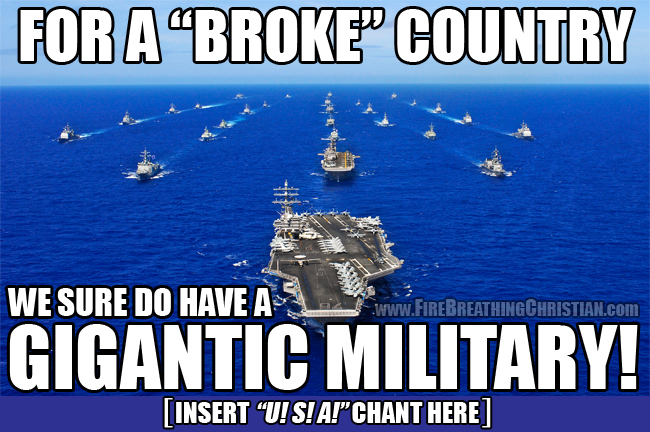 Oh sure, when it comes to certain things and certain programs, the same “conservatives” who insist on doing whatever it takes to have the “biggest, baddest” military in the world rail relentlessly against the “wasteful”, “irresponsible” spending of money that we don’t have. In those carefully chosen instances, they insist on basing our decisions on the fact that every borrowed dollar plunges us deeper toward the eventually inescapable slavery of insurmountable debt. So selling future generations into such a condition through piling on more and more debt is a concept that is on the typical American “conservative’s” radar at some level. They sure do talk about it a lot, anyway, but almost always in a manner drenched in the selective application of self-serving, emotional, and ever-shifting “standards”.

The Welfare State – or at least the parts of it that grate on the selective sensibilities of “conservatives” – is pummeled and cited as an obvious, glaring target for reduction.

But there is no similar application of standards to the Warfare State or even to popular State-empowering/mass-enslaving programs like Public Schools, Social Security, Medicaid, “special government loans” for housing and education, and on and on it goes.

Biblically, all of these State-empowering, mass-enslaving systems and approaches to life are evil and therefore destructive.

Therefore, they all have to go.

If we’re going to even find our way to true life, liberty, justice, peace, and prosperity, anyway.

Social Security, Medicaid, Food Stamps, Unemployment Benefits, Disability Benefits, and the perpetual warfare enabling Military Industrial Complex are all explicitly unbiblical and therefore, whenever and wherever they are enabled and embraced, inherently and invariably pose a serious threat to true freedom, liberty, justice, peace, and prosperity anywhere they are allowed to persist in God’s creation. (See: Kicking the Socialism Habit: Do we love the Lord (and one another) enough to confront and correct our dependence on the State?)

If we truly want restoration in the land, there is a pathway there.

If our prayers for such restoration are sincere, we will be moved toward the repentance and restoration that can and will come to any and all people who, by God’s grace, embrace His Gospel-fueled Great Commission and submit to His Son as King over them.

Only then, with our peace and security rooted in Him rather than in the tools and devices of men, and with a life-enabling fear of the Lord replacing the fear of the world that now dominates and defines our culture, will we finally find the true, life, liberty, happiness and security that The State always promises but can never deliver.