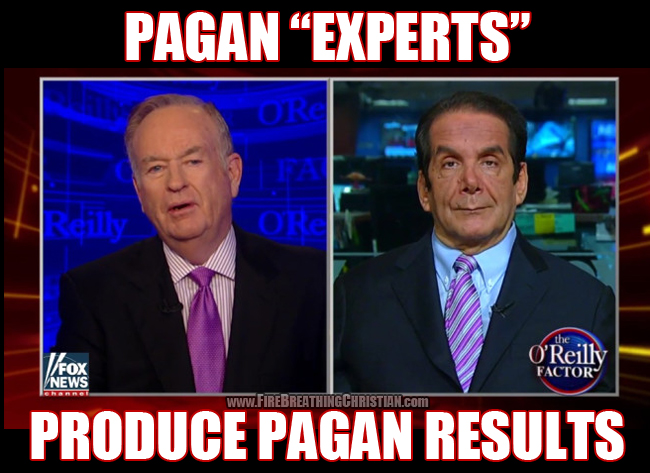 If you thought the proliferation of Dumb and Dumber sequels was a really bad sign for America, you oughta check out Fox News‘ endless parade of “conservative” commentators (many of whom claim to be Christian, of course).

These guys (and gals) effortlessly captivate the hearts, minds, and political passions of vast numbers of professing Christians in the land, leading “the folks” to believe that the Pagan Political Right Wing is actually disconnected from and opposed to the Pagan Political Left Wing, when, in reality, they are actually two wings of the same progressive dragon. This makes these paganized “conservatives” far more damaging and destructive than even the worst incarnation of Dumb and Dumberer that you may be able to imagine. Yeah, it’s that bad.

In case you missed it, earlier this month leading Republican President wannabe Donald Trump advocated “taking out the families” of terrorists, and he didn’t mean to a movie and/or dinner. The Donald was talking about killing families.

Most of his followers, many of whom also claim to be “conservative Christians”, seemed to hoot, howl, and generally lap the idea up. Ah, that Trump sure does “tell it like it is”, right? He’s just “saying what we’re all thinking”! Whatta guy! God bless Donald Trump! He will “make America great again(!)”…or something.

In the wake of The Trumpinator’s call for “taking out families”, other flavors of paganized “conservatives” began to kick around this latest display of the Trump/”Make America Great Again” theology and worldview in practice. One particularly interesting dust-up between anti-Christian “experts” came when Fox News’ Bill O’Reilly and Charles Krauthammer teed things off on air, as recorded by TPM (Talking Points Memo):

The real estate mogul has previously said he would go after terrorists’ families, and on Tuesday night confirmed he would be open to such a strategy, despite Sen. Rand Paul’s (R-KY) note that doing so would violate the Geneva Convention.

Trump responded to Paul’s remark by asking, “They can kill us, but we can’t kill them?”

O’Reilly argued that Trump likely would not kill terrorists’ family members, and only says he would in order to win votes.

Great argument there, Bill. As long as The Donald’s just talking about killing families to get votes and he probably doesn’t mean that he’d really kill families as he says he would, then it’s all good. He’s just telling us lies about murdering families because that’s what he knows will get us to support him…or something.

Just think about that logic for sixty seconds, my fellow Americans. Follow it through. Connect the obvious dots…if you dare.

O’Reilly then continued his unintentionally revealing defense of the indefensible:

“No, I don’t know what you’re talking about,” Krauthammer hit back.

As we’ve already established, lying about murdering families is perfectly within the accepted range of political propaganda playbook pages as far as paganized “conservatives” are concerned. More importantly (and more alarmingly), based on the reaction of many professing conservative Christians who were (and are) supportive of The Trumpinator’s proclamation, actually adopting a policy of murdering families is not only acceptable, but a really good idea.

Krauthammer again highlighted the absurdity of O’Reilly’s position (though never fully so, because Krauthammer, as a good pagan “conservative” himself, cannot do so):

“I don’t care what the motivation is, that I want to elicit an emotion. He says this stuff,” Krauthammer said, adding that Trump did not take the opportunity during the debate to clarify that he would not actually go after innocent family members.

“You believe that Donald Trump would murder people if he were President of the United States?” O’Reilly then asked.

“If he doesn’t want to, why did he say it?” Krauthammer asked in response.

Why did The Donald say that he wanted to kill families as a matter of policy?

Why do millions of American “Christians” like the idea?

And how is God going to deal with a people so openly at war with Him…even as they claim His name with their proud, lying lips?