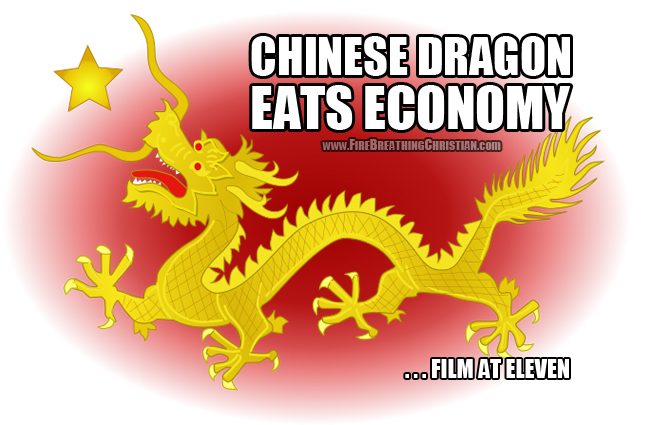 Not since Godzilla ate Tokyo and threatened to swim the Pacific for dessert in (or of) Seattle has an oriental threat to America’s stability made for such a compelling monster.

With U.S. Markets off to their worst opening week start ever in 2016, our Pagan and paganized “experts” and “leaders” are doing their best to construct a Narrative to hold it all together on the propaganda front; a means by which the inevitable fall of our global economic Jenga Tower of Babel might be explained in a manner dismissive of Scripture’s crystal clear pronouncements on economics and business, thereby allowing the same “experts” who brought us to the brink of economic ruin to be trusted to craft the “solution” to said economic ruin after they finish nudging us off the cliff.

The “solution” that these “experts” will then propose will actually represent the next planned step towards our complete economic bondage. (See: Fiat $lavery: We have been bought and paid for…with nothing.)

In The China Narrative That Really Matters, an article recently posted at ZeroHedge, Epsilon Theory‘s Ben Hunt provides some insight as to what’s actually going on and how things may well unfold in China:

. . . there’s one aspect of the China story that can’t heal itself or transform into something more benign from a market perspective, and that’s the Narrative of Chinese Government Competence. To quote myself in “When the Story Breaks”:

“This is a completely different Narrative than the growth story, and it’s the story that one-party States rely on to prevent even the thought of a viable political opposition. In highly authoritarian one-party nations – like Saddam’s Iraq or the Shah’s Iran – you’ll typically see the competence Narrative focused on the omnipresent secret police apparatus. In less authoritarian one-party nations – like Lee Kuan Yew’s Singapore or Deng Xiaoping’s China – the competence Narrative is more often based on delivering positive economic outcomes to a wide swath of citizens (not that these regimes are a slouch in the secret police department, of course). From a political perspective, this competence Narrative is THE source of legitimacy and stability for a one-party State. In a multi-party system, you can vote the incompetents (or far more likely, the perceived incompetents) out of office and replace them peacefully with another regime. That’s not an option in a one-party State, and if the competency story breaks the result is always a very dicey and usually a violent power transition.”
So when I read an article this morning in a famous media outlet owned by famously Beijing-friendly Rupert Murdoch that “the impression left on investors is that Chinese authorities are out of their depth” and that “certainly with respect to the stock market, their reputation for incompetence is well-earned”, I get nervous.
I get nervous because the next move in China is going to be a political move, and political moves are never well anticipated by markets. The Beijing regime is going to take steps to defend itself, or at least insulate itself, from the growing Narrative that they are incompetent. Heads will roll. Literally, in all likelihood. But the incompetence genie is very hard to stuff back into the bottle, and depending on whose head is on the chopping block, regime stability can deteriorate very quickly. . .

All people in all places at all times throughout God’s creation are subject to His Law regarding His creations of economics and business. (See: Why our economic Jenga Tower Of Babel must fall.)

That is the Narrative we as Christians must proclaim and apply at every opportunity as the consequences of black magic fiat economics pop, crash and burn around us. (See: What is the primary goal of business? Hint: It’s NOT what Rush Limbaugh, CNBC, and Forbes are telling us.)