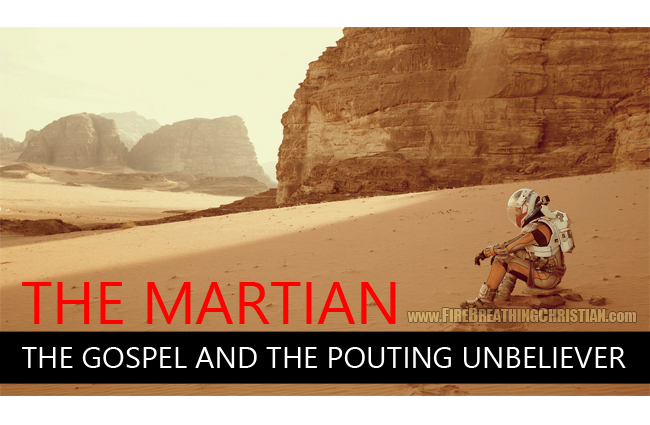 Holly and I took in The Martian last night and it was all that I’d expected it to be after hearing and reading many rave reviews.

It was very well acted and very well directed (Ridley Scott is a genius). It had a solid enough plot and interesting enough twists. It was a well polished production in many ways.

And it was laughably pouty in its desperate presentation of science as an idol worthy of worship over and above the God who owns, defines, and sustains science (and everything else) in His creation.

[Spoiler Alert: For those who have not yet seen The Martian and plan to do so, you may want to stop here as to avoid the revelation of some particular plot points.]

The movie centers on Astronaut Mark Watney (well played by Matt Damon), who is stranded on Mars after his crew is forced to evacuate the planet in the wake of a sudden and fierce storm. Watney is lost and presumed dead during the evacuation, but actually survives the storm and is left alone in its aftermath. He is then forced to rely on his own grit, ingenuity and skill set – which includes botany, something that comes in very handy – in order to go on surviving and eventually find a way to communicate and reconnect with his crew.

Watney chronicles his saga in mostly compelling fashion via videos recorded in a variety of interesting settings. While there is much that is warm, relatable and even inspiring about the character, one thing that comes across loud and clear is his blind evangelical faith in science. This is a central theme not only of Watney’s character, but of The Martian as a whole. The “science as god” vibe permeates the flick.

This is no surprise, of course, with Ridley Scott at the helm and the likes of Damon starring. Their childish contempt for a biblical worldview is well documented. (For more on Ridley Scott’s worldview as reflected in his art, please see Exodus: Gods and Kings and Morons.)

Watney’s early on commitment to, as he puts it, “science the ___ out of” the predicament in which he finds himself, all while making it a point to demonstrate a lack of faith in God in various ways, reflects a central theme of the movie. The notion of man’s problem-solving abilities apart from any clear reliance upon God as the means by which he is to pursue survival and progress is a notion expressed with a palpable evangelical enthusiasm from beginning to end in The Martian.

One of the many brilliant(!) scientists who ends up playing a critical role in charting the path to Watney’s rescue is first seen working/living/sleeping in a room with a large blackboard covered with nerdy/brainy-seeming formulae, sketches and calculations with a nice prominent space reserved for a clear, all-caps “SCIENCE!” 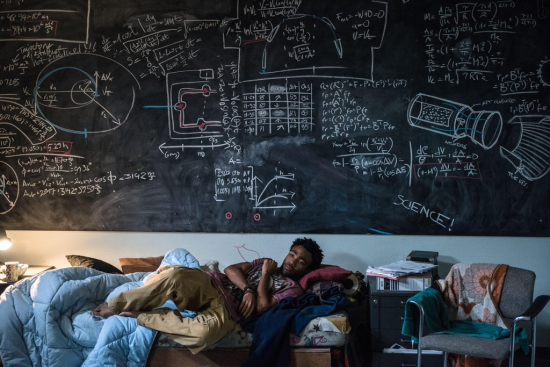 Maybe I’m just being way too nitpicky here, but seeing SCIENCE! pitched on the blackboard that way struck me as forced and childishly evangelical, particularly in light of the “Science is the answer to everything” vibe that had already been well established at that point in the film.

How do anti-Christians like Scott or Damon account for the rightness or wrongness of anything at all, including human survival?

How do they account for the laws of logic that make God’s creation intelligible through things like science?

Instead they borrow logic and morality from the God they know (but hate) so that they try to make their pouty little presentation against Him.

He is the Author, Sustainer, Definer and Owner of science, logic, morality, Mars, Earth, Matt Damon, Riley Scott, everyone and everything else…and there’s nothing that The Martian can do to change that, no matter how hard it may try.