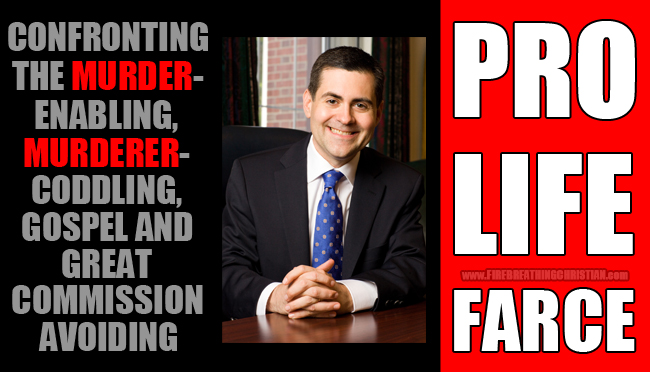 For those of us still blaming “The Democrats” or “The Liberals” or “The Gays” or “The Progressives” for the already advanced and rapidly accelerating state of darkness and decay in our culture, we need to understand one critical and increasingly obvious fact while there’s still time: It is “conservatives” who claim to be Christians yet reject the Word of God in practice who are first and foremost to blame for leading our culture ever deeper into hell.

Which is just the way most American Christians like it.

Welcome to the American “Pro-Life” farce…as brought to you by American Christianity.

More specifically, in today’s example, one of the great enablers of our mass baby murdering age: Russell Moore, President of the [*ahem*] Ethics & Religious Liberty Commission of the Southern Baptist Convention, who is a “widely-sought cultural commentator” (according to his website) and is the author of several books, including one tragi-comedically titled Onward: Engaging the Culture Without Losing the Gospel.

In a painfully revealing article posted today (Does the Pro-Life Movement Want to Punish Women?), Dr. Moore wrote the following (with bold emphasis added and my corrective commentary added in red):

Regardless of whether or not Trump’s comments come from a genuine and convictional pro-life worldview, all pro-life Americans need to make this issue clear: Protecting unborn babies is not about punishing women [who choose to have their babies murdered], but punishing an industry and a culture that dehumanizes human beings [So the industry and culture are wrong for encouraging or participating in the murder of a baby, but the woman who is most involved in the murder is not.]

Pro-life Christians understand that abortion isn’t just a physical attack on a baby [undertaken by choice by the mother willing to have her baby murdered]; it’s a spiritual assault on a mother too […and this is where we paint the baby-murdering mother as – get this – a victim…who needs Democrats and Progressives to play the Victim Card in defense of the most vile of crimes when we have Russell Moore?]. The well-known billboard that says “Abortion stops a beating heart” would be more accurate if it said, “Abortion stops two beating hearts.” [Actually, it is the mother’s sinful, black, murderous heart choosing to snuff out the living heartbeat of her own child that is at the heart of this matter. Again: The murdering Mom is not a victim in this scenario. She is an accomplice to murder.]  Abortion is sin [Yes, the sin of murder…interesting how that word just can’t be used here by the esteemed and educated Dr. Moore, isn’t it?] against God and child, and it is also sin against women [women who choose to murder their own children are not victims. They are accomplices to murder. They must be lovingly confronted with this truth in accordance with the true Gospel command to repent], one that assaults and deadens the moral conscience. [It is Moore’s unbiblical aversion to actually calling murder “murder” that has done much to enable baby murderers and deaden the moral conscience of most American Christians on this subject.]

Many of the women who walk into their local Planned Parenthood clinic are not activists. They’re not ideological foot soldiers in the culture war. Rather, many of them consider themselves to be pro-life, and more than a few are Christians [and no wonder, with pathetic “church” leadership having led them so far astray and enabled so much sin…including now the sin of murdering one’s own child while hiding behind the Victim Cards so eagerly handed out by Dr. Moore.]. For them, the abortion clinic appears to be an escape route from a life of unbearable shame, secrecy, and hardship.

As the church, our mission is to preserve life, both physical and spiritual. We have to advocate for unborn babies [Who are about to be sacrificed by their mothers.], yes, but we also have to advocate for women [Not by painting their sin as an understandable consequence of some farcical “victimhood” status, but by loving them enough to confront them with the fact that they are contemplating murder when they contemplate abortion.] and men whose souls are crying out against them. We have to preach the gospel of repentance and reconciliation [There IS NO GOSPEL – no real one, anyway – in this man’s approach. Without loving, clear confrontation and correction of the sin of murder, there is no Gospel. There’s just a touchy-feely, Victim Card pitching counterfeit.] to steer people away from the clinic, but as they come out, we also have to preach that same gospel to steer them towards Christ. [The classic “steer them towards Christ” excuse for ignoring the crystal clear commands and Gospel-fueled Great Commission of Christ…talk about a vile anti-Gospel approach to reality.] We cannot abandon human beings made in God’s image [who have committed the sin of murder], especially when we have the message of sin [What sin, exactly, Dr. Moore? Murder? If not murder, then what sin?] and justification that will resurrect their broken consciences and silence the voice of the Accuser.

Christians are pro-life people [American professing Christians may be “Pro-Life” like you, Dr. Moore, but biblically rooted Christians understand abortion to actually be murder and love their Lord and all people enough to clearly present that unpopular truth], because we know that everyone is made in the image of a God who is not only Creator and Judge but Redeemer [God has commanded that all people repent of sin, and the true Gospel doesn’t shy away from hard truth and conviction, since conviction tends to be what inspires true repentance, all by God’s grace]. That’s why we advocate tirelessly for babies to be born , and for everyone to be born again [which requires a Gospel that you utterly reject at every turn in practice as you’ve explained yourself here, Dr. Moore]. Let’s wage spiritual (and legal) battle against the powers that seek to steal, kill, and destroy, not against the ones who need rescue [from the murder-enabling, murderer-coddling, Gospel-avoiding American “Pro-Life” movement].

If we truly love women contemplating abortion, we will not enable them to reach for the Victim Card or allow them to paint abortion as anything other than murder. We will lovingly confront them with the truth, praying for conviction and repentance all along the way.

If we truly love women who have murdered their own child (or many children) through abortion, we will stop enabling the denial of their sin. We will lovingly confront and correct them with the hard but necessary truth, hoping that they are convicted and inspired by the grace of God to repent. That’s the Gospel.

If we truly love the likes of Russell Moore, we will stop enabling him, too. We will lovingly confront and correct his catastrophically evil counterfeit Gospel and pray that God will move Him to repentance and restoration.

And if we truly love the Lord, we will strive to do all of these things boldly, clearly and purposefully, but never self-righteously or hypocritically, understanding that there is no mass murderer with a heart more black and dead than ours was the moment before Christ supernaturally saved us.