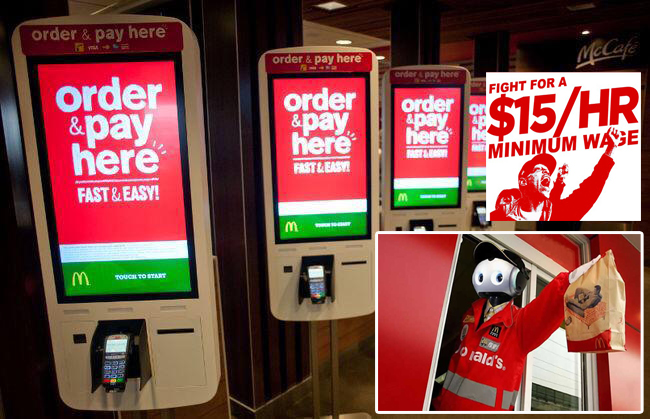 With the passage of a $15 minimum wage into law in California and New York states this week, one thing is clear. Well, several mostly unfortunate and ugly things are clear, but one in particular that we will focus on is this: There is now even more reason to expect the rapid expansion of a robotic workforce.

And as we’ve covered here with some regularity, that’s not a bad thing.

Granted: It’s a good thing that will be very painful in the short term for many due to the unbiblically centralized and purposefully dehumanizing nature of the State and Corporate systems presently dominating our culture, but it is a very good thing nonetheless.

With each artificial system created or expanded to help prop up the whole artificial construct of our fiat economic nightmare just a little while longer, we will find ourselves pressured ever more firmly into the “loving” arms of the State for the “assistance” that we will be told (and will generally believe that) we “need to survive”.

Along those lines, ZeroHedge had a helpful post today chronicling the latest chapter of our managed descent into naked Corporate-State tyranny:

As we noted before, it is even clear to the locals businesses owners like the Marmalade Café which has seven locations. “First, you have to raise prices, otherwise you’ll be out of business,” owner Selwyn Yosslowitz told the Times. So higher prices for diners. That’s “first.” We imagine you can guess what’s “second.” “We will try to re-engineer the labor force,” Yosslowitz said. “Maybe try to reduce the number of bus boys and ask servers to bus tables.” In other words: “Maybe” we’ll fire some folks and the people who keep their jobs will have to be more efficient.

. . . Indeed, the problems with haphazard wage hikes are now readily apparent even to those who stand to benefit the most from the new legislation. Take Miguel Sanchez of Highland Park who works two jobs making tortillas. “It’s good for workers, but I imagine this is not going to be good news for employers and small businesses,” he says. “Will the cost of things go up?” he asks. “Are employers going to cut back hours because they can’t afford it? I worry.”

So even tortilla makers get it, but like Wal-Mart, “some folks” will need to actually see the layoffs before they’ll concede that you can’t cheat economic truisms and that’s really a shame for the people who will lose their jobs in the meantime.

But back to CA Governor Brown who after that brief epipharny he quickly forgot about reality, and told the truth about why he was signing the legislation.

“Morally and socially and politically, they (minimum wages) make every sense because it binds the community together and makes sure that parents can take care of their kids in a much more satisfactory way.”

Ah, so while it may make no sense economically to [*ahem*] employ a minimum wage, Governor Brown is going to use it as a tool anyway for moral and political reasons.

Because it’s moral to act in an economically incoherent manner as long as you have good moral and/or political motives.

In this, unbiblical (irrational) economics is revealed to be just as dysfunctional and destructive as unbiblical law, unbiblical civil government, unbiblical education, or any other unbiblical approach to any other thing in God’s creation.

May God grace His people living in the midst of this building storm with the zeal and opportunity to productively pursue family, business, and economic life in a manner that will not only preserve them through the challenging times to come, but allow them to thrive and help others seeking to find their way free of the wreckage produced by our culture’s longtime pursuit of anti-Christian business and economics.