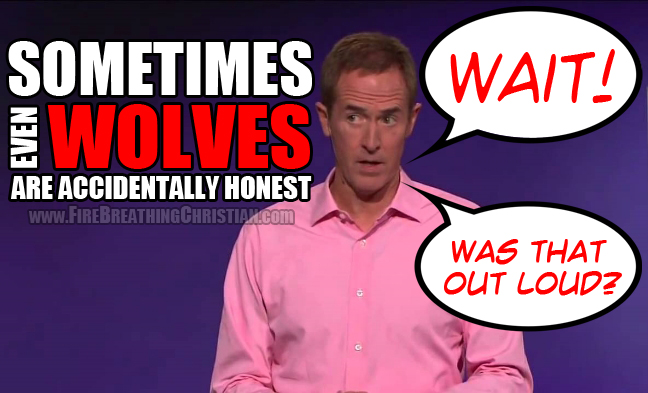 Weak theology and the inconsistent pursuit of Scripture by fathers naturally tends to produce worse theology and a more flagrant disregard for the Word of God in sons. Nowhere is this truth more evident than in the world of modern American Megachurchism.

Joel Osteen and Andy Stanley are two more obvious examples of the day, with the latter recently making his contempt for a biblical approach to church (even more) plain (than usual) during a

As Greg Garrison of AL.com reported back on March 4 in an article entitled Big churches are better, megachurch pastor says; attending small church is ‘selfish’. I thought it worthwhile to share a portion of that post here, with some comments added in bold red:

Stanley, the senior pastor of North Point Community Church in the Atlanta metro area, said he’s tired of people complaining that they don’t want to attend a big church.

“If you don’t go to a large church, you are so stinking selfish,” Stanley said in his Feb. 28 sermon.

“When I hear adults say, ‘Well I don’t like a big church, I like about 200, I want to be able to know everybody,’ I say, ‘You are so stinking selfish. You care nothing about the next generation. All you care about is you and your five friends. You don’t care about your kids…anybody else’s kids.’ You’re like, ‘What’s up?’ I’m saying if you don’t go to a church large enough where you can have enough Middle Schoolers and High Schoolers to separate them [Age segregation of the church is found nowhere in Scripture. Age de–segregation, on the other hand, is found throughout Scripture. Age segregation is a product of the State-run “schools” and secular businesses modeled and advocated by the likes of Andy Stanley.] so they can have small groups and grow up in the local church, you are a selfish adult. Get over it. Find yourself a big old church where your kids can connect with a bunch of people [most of whom are unbelievers who have been attracted to the “church” in question through unbiblical appeals to pagans] and grow up and love the local church [because it’s built on worldly standards, and therefore quite popular with worldly, unrepentant people].”

“Instead… you drag your kids to a church they hate, and then they grow up and hate the local church. [Project much, “pastor”?] And then they go to college and you pray that there will be a church in the college town that they connect with. And guess what? All those churches are big. [Ummm…no they’re not. There are real, biblical churches near even most college towns, not that the likes of Andy Stanley would want anyone to know because they – *ahem* – hate those churches.]“

In a power-point presentation, he admonished his followers: “Don’t attend a church that teaches your children to hate church.” [Again, both the venom and projection are quite pronounced here.]

Stanley, the son of former Southern Baptist Convention President and televangelist Charles Stanley [who personally taught young Andy by example how to dismiss the crystal clear biblical requirements for pastoring a church when your megachurch ambitions are threatened], later tweeted out an [“]apology[“]:

“The negative reaction to the clip from last weekend’s message is entirely justified. Heck, even I was offended by what I said! I apologize.”

But in a follow-up interview posted last month in Christianity Today, Stanley’s approach to “apology” took on the odor of…well…Andy Stanley’s approach to the Gospel, the Church, and pretty much anything else of great biblical significance. Here are some snippets from the interview, with comments added in bold red again:

First of all, what were you thinking? Were your words taken out of context?

This is an example of what I meant being overshadowed, undermined, and contradicted by what I actually said. Honestly, hearing what I said within the broader context of my entire message doesn’t help. As much as I wish folks would listen to the entire message, it really doesn’t diminish the absurdity of what I said.

So, you don’t believe what you said?

I really don’t. I can see how those on the listening end of that clip or on the reading end of this interview might have a difficult time believing me. I don’t blame people for assuming that “what Andy really thinks about small churches” slipped out in a moment of unguarded ranting [actually, these ridiculously unbiblical and destructive views “slipped out” in a lengthy, detailed presentation]. However people who know me, read me, listen to me, and have worked with me know that nothing could be further from the truth. I hope at the end of the day, my 20-plus years of actions will speak louder than these 5-plus minutes of words I so deeply regret. [Andy Stanley’s entire career as a professional counter-Christian church builder has centered on pagan/secular business models in stark contradiction to the crystal clear commands of Christ in His Word as to what the church is and how it is to be built up.]

You told parents they should leave small churches and put their kids in large or larger churches—and you chastised them for caring “nothing about the next generation” if they stay in their small churches.

While that may be true for some parents, it was extraordinarily irresponsible for me to suggest that this is the responsible thing for every parent to do. It’s not. How could I possibly know what every parent should do? My comment was way out of bounds.

No one should force their kids to attend a church they hate simply because mom and/or dad like it. [Think that point through, Christian…and try to find some reference point in Scripture to support it.]

Feel free to check out the whole Christianity Today spin/interview for yourself.

Many others have done a fine job of chronicling and responding to this latest lame chapter in the Andy Stanley saga, but one important aspect that I haven’t noticed anyone address in this context is the “generational descent” between significantly flawed pastors and their even worse pastor sons.

That thought should inspire fathers everywhere to take their theology – their approach to God – very seriously.