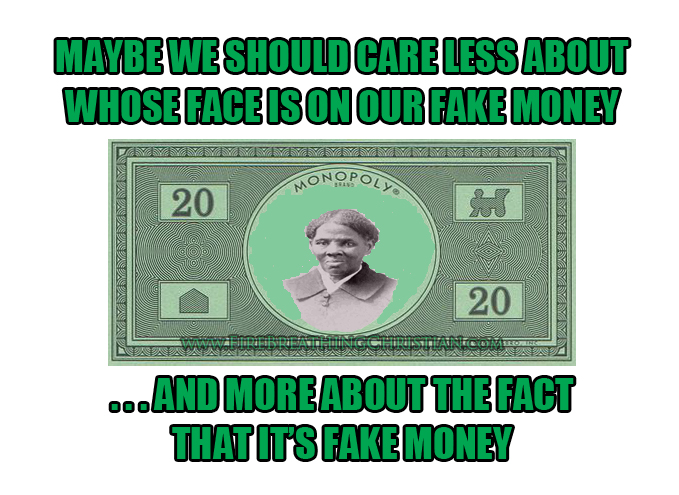 With recent news of Harriet Tubman being slated to replace Andrew Jackson on the Federal Reserve $20 Note, Americans from sea to shining sea are pouring out heartfelt, passionate praise and/or criticism, arguing for or against the change in portraits on American Monopoly Money.

On the plus side, at least Americans are paying attention to certain attributes of their currency.

On the down side, they are totally missing the things worth caring about while totally obsessing over the things that matter least.

But, then again, that was always the point.

We were always meant to be made into compliant, dependent, happily ignorant little cogs to be used and directed as needed by the powers atop the black magic fiat economic construct propped up by the made-out-of-thin-air U.S. dollar.

But one day soon the gig will be up.

Well, everyone but those depending entirely on Fox News, CNN, Rush Limbaugh, MSNBC, Sean Hannity, CNBC, and countless local system-discipled mouthpieces permeating everything from talk radio to church pulpits.

Whether we see it coming or not and whether we want to deal with it or not, there will soon be great pain and turmoil for the willfully ignorant, spoon-fed masses, accompanied by great opportunity and freedom for those who’ve believed the unbreakable Word of God on economics and prepared accordingly.

Lord willing, as things continue to get weirder and wackier while America circles the drain, more people will wake up, repent, and prepare for whatever comes after Harriet Tubman Monopoly money.